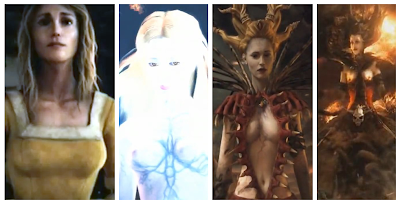 As described by Carl Pyrdum of the Got Medieval blog, it sounds like a really horrible game:

Breezing through Limbo, land of the unbaptized babies with scythes for arms, Dante arrives in the Circle of Lust, where he is heartbroken to learn that Beatrice and Satan are engaged to be married and that her breasts have been put into a new outfit whose decolletage resembles a spiky vaginal opening. Satan gropes the breasts again and whisks them further into Hell.

Still, Dante follows the breasts. But when he arrives outside the city of Dis, things go from bad to worse. Satan reveals to Beatrice the Arab canoodling that Dante got up to on Crusade, which causes her to finally agree to the wedding. She eats a magic pomegranate that Satan hands her, which causes her breasts to begin to glow like hot coals and burn with a fire that does not consume them. Also, she gets a sort of skull-covered corset to hold them up. Beatrice and Satan french kiss for a while, then he scoops her up and takes her further into Hell. Dante is so incensed by this that he stabs his scythe into the head of a really, really big demon and rides the demon down after them.

That's Beatrice in the images above.
Posted by John at 8:36 PM