Naomi Wolf Slides off the Cliff 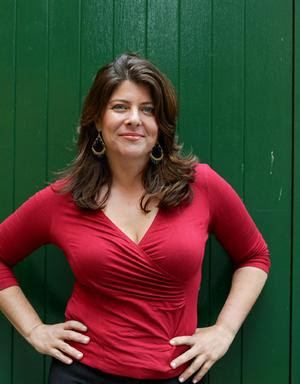 Jonathan Chait passes on the latest about my briefly famous and now increasingly deranged former classmate, Naomi Wolf. Once a feminist and adviser to Al Gore, she supported Ron Paul in 2008 and has now joined the Tea Party movement. Chait has a video clip of her telling an audience that the government is intercepting her mail, which she knows because she is not getting letters from her daughter at camp.

There are advantages to having a lunatic mother: "Honest, Mom, I've been writing every day! The government must be intercepting my letters!"

And to think that I used to sit behind her in Heinrich von Stadten's "Myth, Science, and Philosophy in Ancient Greece" and greedily watch her toss her beautiful hair. Even then she sometimes had only a tenuous grasp of what was happening around her, but I wrote it off as vanity. Little did I know how much madness lurked under that shining hair.

On the other hand, she is strongly anti-torture.
Posted by John at 2:04 PM

I too had a class with Naomi and I remember my surprise when it took hardly any time at all, it seemed, for her to become an acclaimed author. (These days acclaimed authors from our class are a dime a dozen, I love it!) I'm pretty shocked anyone could go from advising Gore to the Tea Party, in any case. Wow.