My Hopes for the Large Hadron Collider 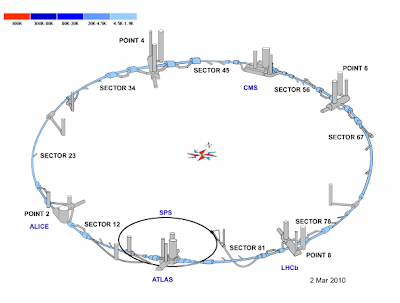 The gigantic Large Hadron Collider is finally up and running, smashing protons into each other at unprecedented energies. The goal is to learn more about the sub-atomic world, and thus about the universe.

Our models of sub-atomic physics are extremely useful but incomplete and mathematically messy. For example, in its simplest form, the "Standard Model" gives all particles a mass of 0; to account for the obvious fact that particles do have mass, physicists have conjured up the "Higgs field" and an as-yet unobserved particle called the "Higgs boson." Many physicists find the whole construction dubious. The most impressive recent attempt to make sense of the sub-atomic world, string theory, has grown more and more controversial as it remains unproved and untestable.

Observations by telescopes suggest even more problems with our models. Measurements of how galaxies interact show that most of the universe is made up of something we can't see, which we call Dark Matter. And they are moving in ways they shouldn't, perhaps impelled by a force we call "Dark Energy." These constructions are like the "eipcycles" astronomers dreamed up to make the observed behavior of planets fit into their earth-centered models of the universe; they are signs of ignorance, not understanding.

My hope for the Large Hadron Collider is that the first results will be something completely unexpected. I have a sense that sub-atomic physics has reached a dead end, or at least gotten mired in a deep bog. I think minor refinements to existing models will not get us out of the bog. Finding the Higgs boson, often offered as a major goal for the LHC, would, I think, only mire us more deeply, since it would confirm that our incomplete, messy model is correct on its own terms.

But a real surprise, a result that we cannot at first interpret, might open the way to real progress.
Posted by John at 9:03 AM

I doubt they will find the theoretical Higgs boson, but who knows. They've spent so much money now that they'd better find something right? I think science should concentrate on why matter/energy only takes 94 naturally occurring forms, rather than seeing what happens to matter/energy when we smash it to pieces.