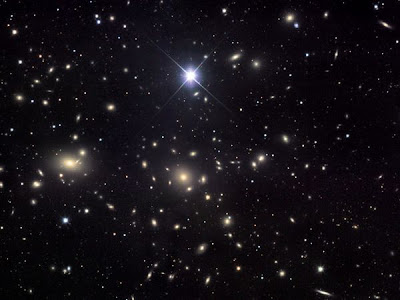 In case you were getting complacent and starting to think that we understand the universe, I pass along the latest news about a phenomenon called "Dark Flow."

In 2008 scientists reported the discovery of hundreds of galaxy clusters streaming in the same direction at more than 2.2 million miles (3.6 million kilometers) an hour.

This mysterious motion can't be explained by current models for distribution of mass in the universe. So the researchers made the controversial suggestion that the clusters are being tugged on by the gravity of matter outside the known universe.

Now the same team has found that the dark flow extends even deeper into the universe than previously reported: out to at least 2.5 billion light-years from Earth.

After using two additional years' worth of data and tracking twice the number of galaxy clusters, "we clearly see the flow, we clearly see it pointing in the same direction," said study leader Alexander Kashlinksy, an astrophysicist at NASA's Goddard Space Flight Center in Maryland. "It looks like a very coherent flow."

The find adds to the case that chunks of matter got pushed outside the known universe shortly after the big bang—which in turn hints that our universe is part of something larger: a multiverse.

Then again, maybe we just don't understand this at all.
Posted by John at 8:15 AM