The Lead Coffin of Gabii 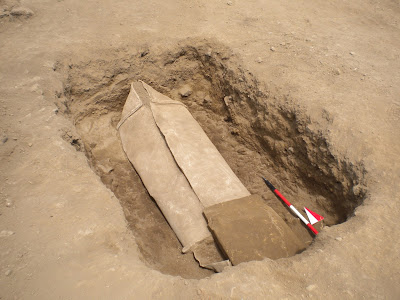 Archaeologists working in Gabii, a few miles from Rome, have unearthed a 1000-pound lead coffin dating to around AD 200 to 400. An elaborate coffin of any kind from this period would be a rare find, a lead one practically unheard of. The identity of the corpse is unknown, but since a thousand pounds of lead would have cost a small fortune, it must have been someone quite wealthy. The coffin has been transported to the American Academy in Rome, where it will be studied:

Human remains encased in lead coffins tend to be well preserved, if difficult to get to. Researchers want to avoid breaking into the coffin. The amount of force necessary to break through the lead would likely damage the contents. Instead, they will first use thermography and endoscopy. Thermography involves heating the coffin by a few degrees and monitoring the thermal response. Bones and any artifacts buried with them would have different thermal responses, Terrenato said. Endoscopy involves inserting a small camera into the coffin. But how well that works depends on how much dirt has found its way into the container over the centuries.