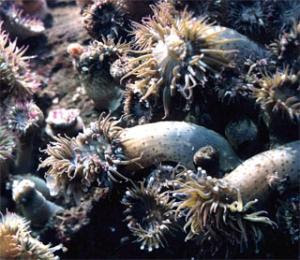 How did I miss this story?

Clashing colonies of sea anemones fight as organized armies with distinct castes of warriors, scouts, reproductives and other types, according to a new study. The sea anemone Anthopleura elegantissima lives in large colonies of genetically identical clones on boulders around the tide line. Where two colonies meet they form a distinct boundary zone. Anemones that contact an animal from another colony will fight, hitting each other with special tentacles that leave patches of stinging cells stuck to their opponent. . . .

When the tide is out, the polyps are contracted and quiet. As the tide covers the colonies, "scouts" move out into the border to look for empty space to occupy. Larger, well-armed "warriors" inflate their stinging arms and swing them around. Towards the center of the colony, poorly armed "reproductive" anemones stay out of the fray and conduct the clone's business of breeding.

The more you know, the weirder the world gets.
Posted by John at 10:05 AM