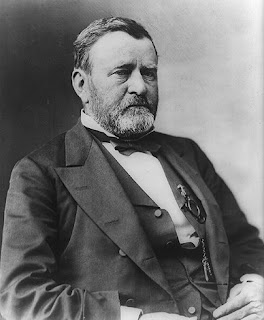 A proposal has been floated in Congress to replace the portrait of Grant on the $50 bill with Ronald Reagan. I must protest.

Grant has been slandered for decades by Southern historians and politicians who are really just mad that he whipped their hero, Robert E. Lee, and won the Civil War. They called him a "butcher" and said he won his victories by drowning his enemies in blood. He was, on the contrary, an outstanding general whose singular virtue was that he was incapable of being afraid. Lee had frightened a long list of Union commanders back into Washington, but Grant wouldn't scare. True, he attempted no clever tactics against Lee, but only a fool would have, especially not on Lee's home ground where his intelligence of every Union move was nearly perfect. Instead he did what both he and Lee knew would inevitably lead to Lee's defeat: he marched on Richmond and laid the Confederates under siege. Yes, he launched attacks that led to the slaughter of his men. So did Lee -- none of Grant's attacks was any stupider than Pickett's Charge -- and every other leading general of the time. But, you know, he won, where many other had failed. Of America's generals, only George Washington did more for our nation than Grant.

Grant's Presidency is remembered mainly for scandals, but this, again, is the result of southern slander. Yes, there were scandals, but that was pretty much the norm for nineteenth-century politics. Grant's enemies made much of his because they were determined to stop his policies:

As president, Grant was determined to achieve national reconciliation, but on the terms of the victorious North, not the defeated Confederates. He fought hard and successfully for ratification of the 15th Amendment, banning disenfranchisement on account of race, color or previous condition of servitude. When recalcitrant Southern whites fought back under the white hoods and robes of the Ku Klux Klan, murdering and terrorizing blacks and their political supporters, Grant secured legislation that empowered him to unleash federal force. By 1872, the Klan was effectively dead.

For Grant, Reconstruction always remained of paramount importance, and he remained steadfast, even when members of his own party turned their backs on the former slaves. After white supremacists slaughtered blacks and Republicans in Louisiana in 1873 and attempted a coup the following year, Grant took swift and forceful action to restore order and legitimate government. With the political tide running heavily against him, Grant still managed to see through to enactment the Civil Rights Act of 1875, which prohibited discrimination according to race in all public accommodations.

Grant deserves to be remembered much better than he is.

I don't hate Reagan like a lot of my liberal friends. He stood up for freedom at a time when many American conservatives (Nixon, Kissinger and their crew) thought totalitarian nations had such a military advantage than America could only win the Cold War by becoming a sort of dictatorship. But Reagan thought the government should not be doing much of anything to help the poor and disenfranchised of our own country. He thought the government should just get out of the way and let people rise or fall by their own efforts. Grant at least understood that there were powerful forces blocking the rise of blacks and other impoverished Americans, and he did what he could to fight the most violent of those forces.

Reagan is a hero to conservatives because he gave new energy and hope to the conservative movement. He was a great party leader. That is quite a different thing, though, than being a great president, or even a great general.

Grant was a great general, a good president, and a thoroughly decent man. He fought for American unity, and for the rights of all Americans, regardless of color. He deserves his place on the $50 bill.
Posted by John at 12:22 PM