The Rock Art of Val Camonica 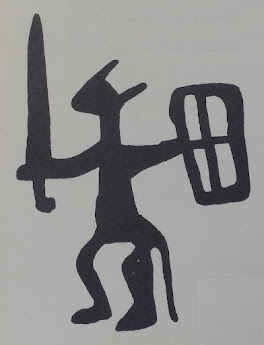 The Val Camonica is a valley in northern Italy that is mysteriously full of petroglyphs. I have long been fascinated by the rock art found in certain Alpine valleys, always places where few people actually lived, and I mentioned Val Camonica on this blog back in 2011. Then last month my elder daughter and I were exploring the amazing warehouse of Second Story Books in Rockville, Maryland when I stumbled on a book I had never heard of: Camonica Valley by Emmanuel Anati (1961, French edition 1960). Anati was a French scholar who led the major effort to document and understand these carvings, carried out mostly between 1954 and 1958. In four years Anati's team recorded nearly 600 carved rocks bearing more than 20,000 images, an extraordinary document of the past. 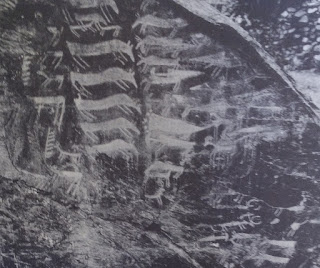 Of course one of the biggest challenges in understanding rock art is figuring out how old it is. Anati's team made a lot of progress by documenting hundreds of places where later carvings were superimposed on earlier ones. (See above; the original isn't much clearer, which is the point.) They also compared the images to rock art from other parts of Europe, to objects and images from Mycenaean Greece, and to what was known about the prehistoric past of the Alps. They believed that the carvings began around the beginning of the Bronze Age or perhaps in the very late Neolithic, around 2200 BC. Many were made in the Bronze and Iron Ages, and a few as late as 500 BC, since there are a couple of texts in Etruscan. There is quite a bit of guesswork in any such chronology but I am impressed by the work Anati's team put in and am willing to put provisional trust in their conclusions.

The oldest carvings, as you would expect, include a lot of animals. This is the oldest tradition of figurative art, connected by many people to hunting magic. The Greek myths show us that hunting remained prominent in Mediterranean religion and ritual long after farming and fishing became the main food sources, so the prominence of hunting scenes in Bronze Age rock art is hardly surprising. 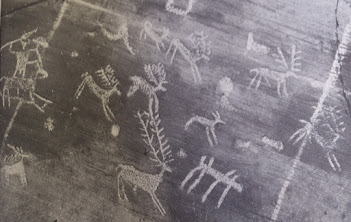 Anati glosses this image as "a herd of deer pursued by an ox-headed god with a double lance, standing on a horse hobbled as always when bearing a god." 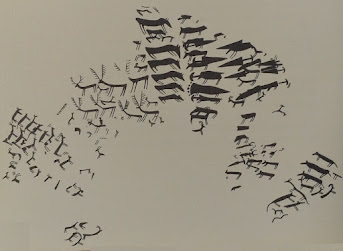 Another challenge of interpreting rock art is guessing which assemblages are random and which are scenes intended by the carvers. There were a limited number of suitable boulders near the sacred sites, which is why there are overlapping carvings. A good example of an ambiguous scene is above. (Notice the daggers, a common symbol from the late Bronze Age.) 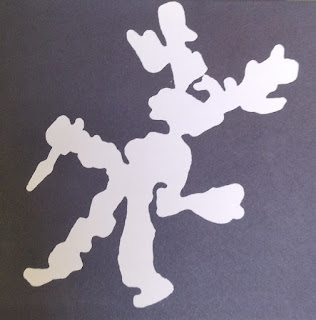 There are also several hybrid figures like this stag man, variously interpreted as gods, spirits, or priests. I connect them to the very old European tradition of donning animal or monster costumes at certain holidays. 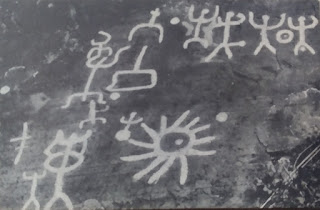 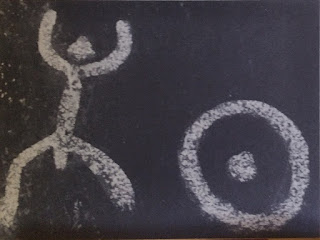 One of the puzzles of European rock art is the prominence of scenes widely seen as representing sun worship. Not that there is anything weird about sun worship, it's just that older European myth preserves essentially none of it. It is not prominent in Indo-European lore, nor was it a big deal among the Neolothic Anatolians who brought farming to Europe. (Think about Çatalhöyük, lots more bulls and vultures than sun symbols.) According to Anati, it dominates the earlier religious scenes at Camonica. A "horned god" figure emerges later, and toward the end of the series we see what looks like a warrior hero figure, perhaps like Hercules or one of the other semi-divine heroes so prominent in stories from the Iron Age.

Anati notes that the largest gatherings depicted on the rocks are all scenes of religious worship; he calls this a procession. 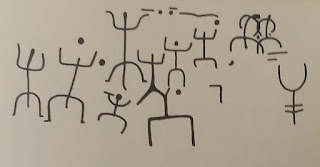 This early scene is called The Wedding. Notice the very ancient Neolithic symbol of the bull's head at the far right, below the couple. 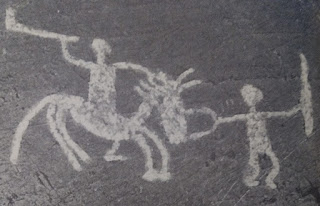 Later carvings depict a diversity of human acts. Including war, of course. 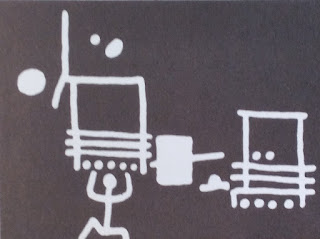 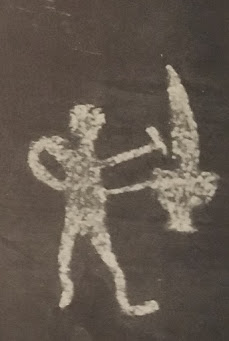 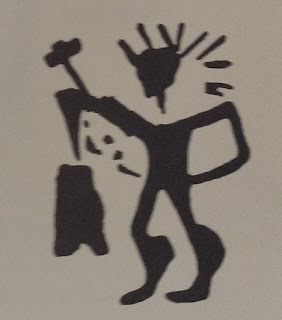 Smiths at work; the lower one appears to be wearing a headdress like those shown on many priests. This may be a literal hat or may be a sign that something divine or magical is taking place. 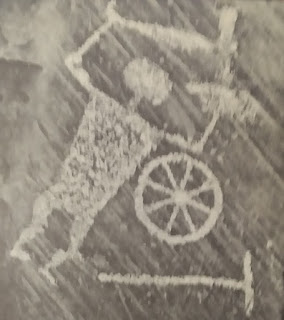 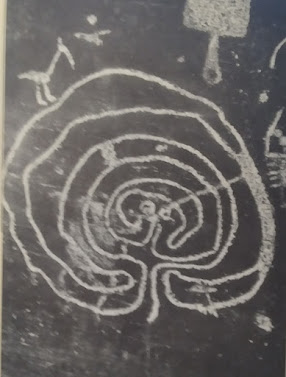 Several labyrinths  of the Troy Town type are known. Notice that this one appears to have a face in the center. 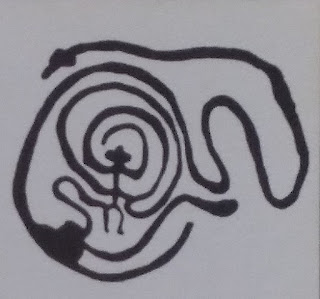 Anati thinks this represents a being, shown more fully on this example, which he connects to the myth of the Minotaur. 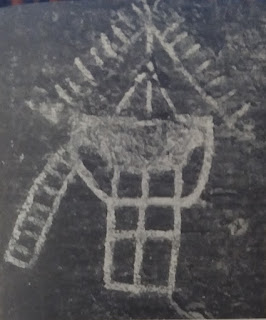 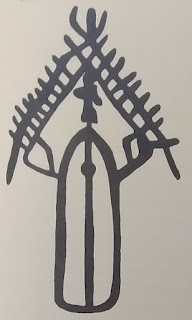 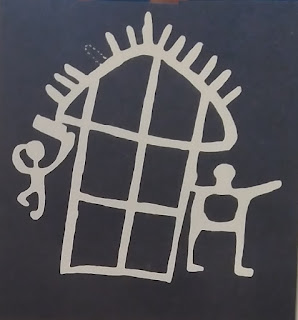 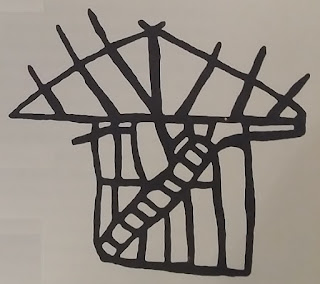 My favorite images are the ones that show houses. It's hard to know exactly how to interpret these but they are certainly wood frame structures with multiple stories, with stairs or ladders to the upper levels. There are also drawings that seem to be schematic representations of small towns, with scratches that may represent property lines or the layout of fields. 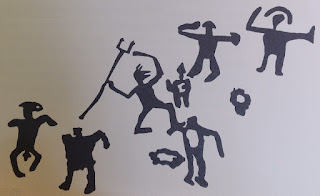 These carvings are a wonder, an extraordinary window into the ancient past, and Anati's book is a treasure house for anyone who finds them fascinating.
Posted by John at 12:04 PM

Wonderful rock carvings, but I'm distracted with pleasure at your story of finding the book. That's just the sort of thing one wants out of a giant warehouse of used books.