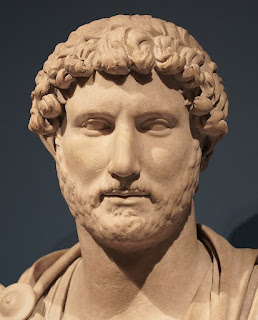 I've been curious about this famous book for years, but it isn't in my public library and there doesn't seem to be a recorded version in English. But when my eye fell on a cheap used copy, I thought, if not now, when? So I bought it, and I am very glad I did. It has vaulted onto the very small shelf of my favorite historical novels.

It was once fashionable to praise this 1951 book for its perfect recreation of the Roman world, but I didn't see it that way and I gather most contemporary historians feel the same. Yourcenar did not imagine the ancient world the way I do. But Memoirs of Hadrian immerses you in a rich and amazing world of its own, and it draws in much of what is known about Hadrian's life, so it is in its way extraordinary.

Hadrian (reigned 117 to 138 AD) was one of the greatest Roman emperors, and some people think his era saw the absolute peak of Roman civilization. The Memoirs take the form of a letter written by the dying Hadrian to his adoptive grandson Marcus Aurelius. (Marcus's famous Meditations are an obvious influence on the style.) Hadrian relates the main events of his life and reign, but more of the text is reflection than narration. I would say, in fact, that the point of this book is to reflect on life from the perspective of someone who was not a twentieth-century European. Yourcenar's Hadrian is enough like us for his thinking to make sense, but different enough to overturn some of our assumptions and show human life in different ways. Hadrian was also a bisexual slut in a milieu where that was completely unremarkable, giving Yourcenar scope to examine the different kinds of eros, and the differences between loving a woman and loving a man.

Hadrian comes down to us with a reputation for a strange coldness, a man more of policy than emotion. (More Octavian than Julius Caesar.) He was not vicious but he seems at times completely indifferent to whether other people live or die. Yourcenar has him reflect that while he did not especially want to murder any one it was useful for an emperor to be feared. His strongest feelings were for Greek culture, which he adored, and for his lovers, especially a teenager named Antinous who was the passion of his middle age. 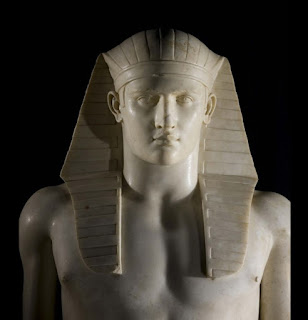 Antinous as Osiris, one of an astonishing number of statues of Hadrian's beloved to have come down to us.

Here is Yourcenar's Hadrian on his subjects:

I was not much liked. There was, in fact, no reason why I should have been. . . . It is not that I despise men. If I did I should have no right, and no reason, to try to govern. I know them to be vain, ignorant, greedy, and timorous, capable of almost anything for the sake of success, or for raising themselves in esteem (even in their own eyes), or simply for avoidance of suffering. I know, for I am like them, at least from time to time, or could have been. Between another and myself the differences which I can recognize are too slight to count for much in the final total. . .  The most benighted of men are not without some glimmerings of the divine: that murderer plays passing well upon the flute; this overseer flaying the backs of his slaves is perhaps a dutiful son; this simpleton would share with me his last crust of bread.

That is Memoirs of Hadrian; 300 pages of a thoughtful, philosophical old man reminiscing about his remarkable life and pondering the meaning of it all. It is also in places stunningly beautiful. From the many passages I marked for re-reading as I went I choose this one to share some of the majesty of this book:

From the nights of my childhood, when Marullinus first pointed out to me the constellations above, my curiosity for the world of the spheres has not abated. In the watches of camp life I looked with wonder at the moon as it raced through the clouds of barbarian skies; in later years, in the clear nights of Attica, I listen while Theron of Rhodes, the astronomer, explained his system of the world. In mid Aegean, lying flat on the deck of a ship, I have followed the slow oscillation of the mast as it moved among the stars, swaying first from the red eye of Taurus to the tears of the Pleiades, then from Pegasus to the Swan. I answered as well as I could the naïve questions so gravely put by the youth gazing with me at that same sky. Here at the Villa I have built an observatory, but I can no longer climb its steps. Once in my life I did a rarer thing. I made sacrifice to the constellations of an entire night. It was after my visit to Osroes, coming back through the Syrian desert: lying on my back, wide awake but abandoning for hours every human concern, I gave myself up from nightfall to dawn to the world of crystal and flame. That was the most glorious of all my voyages. Overhead shone the great star of the constellation of Lyra, destined to be the polar star for men who live tens of thousands of years after we have ceased to be. In the last light of the horizon Castor and Pollux gleamed faintly; the Serpent gave way to the Archer; next the Eagle mounted toward the zenith, wings widespread, and beneath him appeared the constellation at that time unnamed by astronomers, but to which I have since given the most cherished of names.