One Small Battle in Ukraine 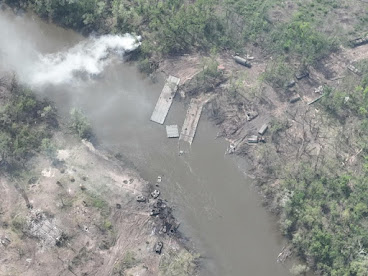 On May 8, a Russian attempt to bridge the Seversky Donets river near Bilohorivka in Donetsk Oblast was defeated by Ukrainian forces, a single action in one day of fighting out of more than two months of war. But look at the scale of losses here. 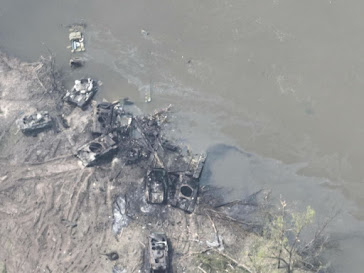 Just from these drone photographs people have counted seven T-72 tanks, 31 BMP and MT-LB infantry fighting vehicles, five other armored vehicles, six trucks, and a work boat, plus the bridge itself. Note that if the turret is missing that means the ammunition in the vehicle exploded, killing the entire crew. Surely over a hundred men died here, perhaps many more than that, in this one small battle that probably lasted no more than a few hours. This is why most western experts say the Russian offensive is not sustainable and will run out of steam soon. 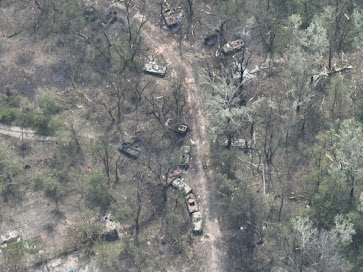 According to Ukrainian reports, most of this damage was done by artillery. Presumably it was guided by drones or forward spotters. Both sides can bring this kind of firepower down on any force that masses in the open. 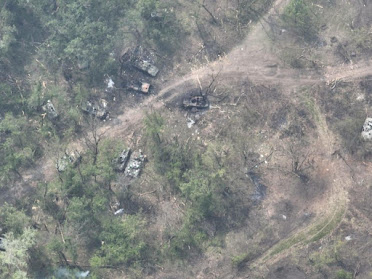 Supposed Ukrainian account of the battle here.
Posted by John at 5:10 PM

"Surely over a hundred men died here, perhaps many more than that, in this one small battle that probably lasted no more than a few hours."

This is a little late at this point, but I've read that the British defence ministry believes Russia lost at least one battalion tactical group in this failed bridging effort, meaning Russian losses were over one thousand men, rather than over one hundred.

If Ukraine can keep this sort of momentum going, they confidently stand to liberate Crimea and the Donbas within the year.

I do wonder if they'll stop at their own borders, or if at some point they'll start striking across the border at Russian military targets such as arms depots, etc. I can see them not wanting to go that far - both for the sake of maintaining their moral superiority, and to avoid stoking Russian paranoia and escalating the conflict into nuclear brinksmanship or even just mass mobilization and conscription on the part of the Russians.

@G- most of the sources I have seen say that these days a BTG is more like 600 men than a thousand, plus you don't have to kill all the men in order to "destroy" a formation. A hundred killed plus 200-300 wounded, coupled with the destruction or abandonment of most vehicles, would amount in military terms to destruction.

The question is whether the sources are right. I am strictly pro-Ukrainian in this conflict, however the problem is that most of the information I find online is also pro-Ukrainian. I try to counter this bias by actively searching pro-RUssian sources - which, however, are hard to find when you filter obvious propaganda, trolls and idiots. What's left is bunch of Russian amateurs (or skillful propagandists). This really gets on my nerves.