The Decline of the College Premium 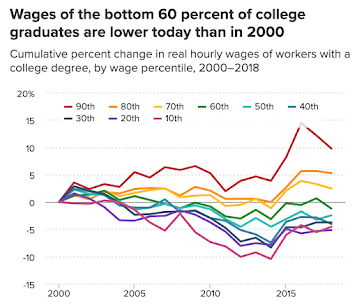 As Paul Krugman explains in the NY Times, much of the push for student relief comes from people whose college degrees are not providing them much economic benefit. The idea behind borrowing money for college was always that you would pay the money back out of your increased income. But that idea has been faltering for decades. In America, the number of college graduates has risen much faster than the number of high-paying jobs that require a degree. A degree no longer guarantees you any sort of elite status, and the real divide is between people who get valuable degrees from top institutions and those who get something else. 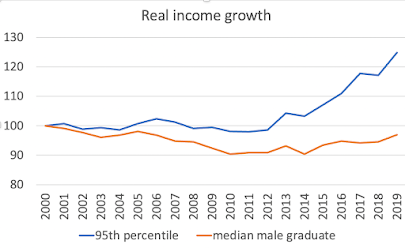 These graphs show that while some Americans (most of whom are college graduates) are doing very well, just having a degree doesn't guarantee you a good or rising income.

There is also the issue of schools offering worthless degrees. Krugman directs a lot of animosity at for-private colleges, some of which are pure scams, and some of which are just charging a lot more for credentials available at community colleges. But there are other cases. To become a fully credentialed archaeologist you need a master's degree, which is expensive at a decent American school. So we see a lot of young people who have gone to Britain to get one-year MAs on the cheap. So far as I can tell these programs are set up simply to extract money from foreigners, since the students usually don't learn much and what they do learn is irrelevant to work in North America. We pay very little attention to those degrees. Now, if you managed to land a job and then get the necessary experience and learn the necessary skills, that MA would count for the bureaucratic requirement that a principal investigator have a graduate degree. But in and of itself it means nothing.

While I understand the anger over all of this, I am opposed to debt forgiveness. College graduates are not the most needy or deserving people in the US; I would rather see some of that money spent on mental health care for the homeless, and I could come up with lots of other examples. It also has the perverse effect of rewarding people who borrowed more than they really had to (lots of people do, and use the money for living expenses) while punishing those who scrimped and borrowed as little as possible.

Most importantly, what is the long-term plan here? Declare a debt jubilee every decade? Maybe, instead, we should be do something to rein in college costs so people don't have to borrow so much? Or how about we make community college free, and encourage people who would have to borrow money for school to spend their first two years in CC? There are many better ideas than just waving your hand over one generation's debts.

I wonder if there's anything that could really be done to rein in college costs. I remember something you posted a few years ago, about an argument that education and health care, as human-to-human activities, simply can't be made more efficient, and thus cheaper, in the way that technology and capitalism have imposed efficiencies on other activities, like raising food. I found that argument persuasive.

Even if one cut the number of administrators and/or their salaries, made fac/staff offices and student lodging crappier, and canceled all athletic programs, I'm not sure this would really solve the problem in the long term. This is especially true given that, as we have discussed here many times, there's already a problem with getting students to learn much. It may be my own dimness, but I've never thought of much way to improve teaching and learning that wouldn't also increase costs (especially by reducing class sizes to, like, 10-12 students).

How about doing what much of Europe does, and have colleges and universities chiefly operate as free or low cost government services instead of private enterprises?

Much of the affluent Western world manages to have high quality college education available to whoever wants it for basically no cost. We could do the same, if we really cared to. But colleges in America today exist largely as corporate enterprises that exist to profit shareholders, not as centers of learning and societal improvement. It's just a matter of who we prefer to serve and what we want to achieve - we don't want to educate the masses as much as we want to enrich small handfuls of investors.

While I understand the anger over all of this, I am opposed to debt forgiveness. College graduates are not the most needy or deserving people in the US; I would rather see some of that money spent on mental health care for the homeless, and I could come up with lots of other examples.

1) It's not only graduates who have debt - there are plenty of people who took loans and yet couldn't graduate, for any number of legitimate reasons.

2) Why do you oppose a good measure just because there are other good measures that are perhaps more pressing? We could enact both measures, and take the money from somewhere else - like our insanely bloated military budget. Or we could raise taxes, particularly on corporations and the wealthy who pay a fraction of what would be their fair share.

3) As for college student being "deserving", are you factoring the fact that young people were intentionally pushed into going to college and taking out loans to do it by their elders? We're talking about people who spent their entire lives being told by parents, teachers, school administrators, and authority figures of every stripe that they HAD to go to college and get a degree if they wanted to earn a decent wage, and the reality is that for most of them, that was a blatant lie which led them to impoverish themselves pointlessly so that unscrupulous colleges could profit tremendously off their suffering.

Many millions of young Americans have been put into massive debt that will financially cripple a large percentage of them for life - to say nothing of their children - through no fault of their own. In fact, they are guilty only of doing what they were told was the "right" thing to do. A massive injustice has been perpetuated, with consequences that will last for generations, and you oppose measures to correct the harm done, on the pretext that these innocent people don't "deserve" justice for what was done to them?

That's simply not true. The vast majority are either state-run or non-profit. There's no such thing as stock in Harvard or Haverford or whatever. The for-profit college system is a creation largely of the last 30 years or so. But all the old, private liberal-arts-type colleges are non-profit.

I do take your point about making college an entirely government-paid-for affair. But I'd be interested to know if European government-run colleges are cheaper to run, as well as cheaper to go to, or if the actual cost is borne by the taxpayers. And if they're cheaper to run, why is that? (And I repeat, it's not because American colleges are "corporate enterprises that exist to profit shareholders"; we'd have to figure out some other reason why American colleges are so expensive.) Incidentally, I'm not saying that the cost being borne by taxpayers is a bad idea.

How about doing what much of Europe does, and have colleges and universities chiefly operate as free or low cost government services instead of private enterprises?

It works basically well, but for international students it also means a "free lunch" as they often leave the country immediately after earning their degree. The beneficiary is USA which attracts especially East Asians. In European taxpayer´s view the only justification of educating foreign students is the benefit for the whole society. And therefore universities and companies should be active in finding ways to make profits based on the international education in our country (https://thoughtsprof.blogspot.com/2022/04/international-masters-degree-is.html).

Well, In Poland it means whole society funds education for foreign countries, as thousands and thousands of students leave every year to work in UK or Germany.

Here's what I seriously think about the cost of education in the US: unless something is done to limit spending, any increase will simply be swallowed up like all the others have been. I would support more government funding, but only if it were accompanied by limits on loans and tuition increases.

My grand scheme would be to reduce the number of places in four-year schools and route a lot more students to community college, which I would make free.