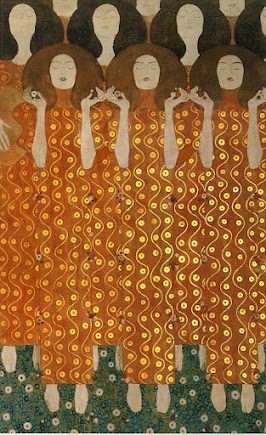 In the late 1800s, avant garde artists across Europe pulled out of the salons where new art had traditionally been exhibited and formed organizations more welcoming to the new and the strange. These were called "Secessions." The one in Vienna was launched in 1887. In the way of the modern world, the new Secessions very quickly dominated the art world, becoming a new sort of establishment. 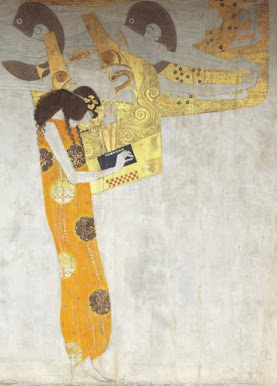 In 1901, Gustav Klimt painted a frieze honoring Beethoven for the 14th Vienna Secessionist exhibition. The frieze is large, 7 feet high and 112 feet long, weighing four tons. It was painted directly onto the walls, which were made of stucco over reed matting. After the exhibition it was taken down in sections and put into storage. In 1986 it was taken out and exhibited again, and has been very popular ever since. 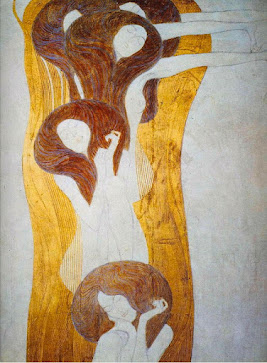 Here is one analysis:

The frieze illustrates human desire for happiness in a suffering and tempestuous world in which one contends not only with external evil forces but also with internal weaknesses. The viewer follows this journey of discovery in a stunning visual and linear fashion. It begins gently with the floating female Genii searching the Earth but soon follows the dark, sinister-looking storm-wind giant, Typhoeus, his three Gorgon daughters and images representing sickness, madness, death, lust and wantonness above and to the right. Thence appears the knight in shining armour who offers hope due to his own ambition and sympathy for the pleading, suffering humans. The journey ends in the discovery of joy by means of the arts and contentment is represented in the close embrace of a kiss. Thus, the frieze expounds psychological human yearning, ultimately satisfied through individual and communal searching and the beauty of the arts coupled with love and companionship. 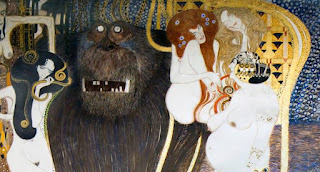 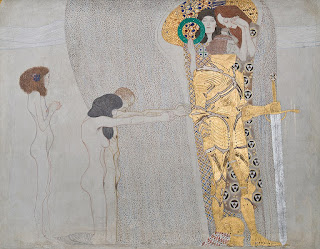 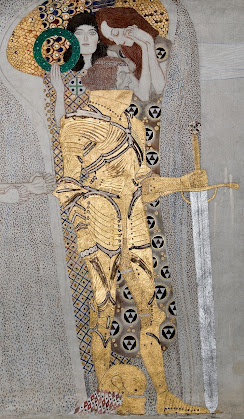 Which makes sense, although it should be said that Klimt was not a great one for explaining himself. Whatever it means, it is certainly striking and lovely. 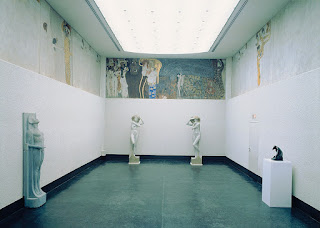