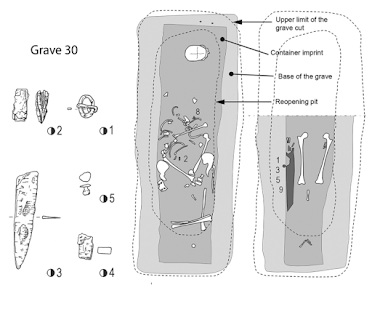 Plan of a Re-Opened Grave in Regensburg, Germany

In our world, we bury dead bodies in the ground and are then (we hope) finished with them. But other people have acted very differently. Many societies have led corpses through a series of events and locations that map out a long route from life to death. For example, some cultures have buried bodies until the flesh is gone, then dug up the skeletons and displayed them in charnel houses. Others have done the reverse, exposing the remains above ground until the flesh is gone and then burying the bones. There are many, many permutations.

In light of this, I am interested in a new paper in Antiquity from Alison Klevnäs et al. titled Reopening graves in the early Middle Ages: from local practice to European phenomenon.

Across Europe early medieval archaeologists have long recognised significant numbers of graves displaying evidence for the intentional post-burial disturbance of skeletons and artefacts. The practice of reopening and manipulating graves soon after burial, traditionally described—and dismissed—as ‘robbing’, is documented at cemeteries from Transylvania to southern England. . . . In some cemeteries just one or two graves are affected, but in others almost all are reported as having been reopened, often so soon after burial that coffins and occasionally even bodies had not yet decomposed. Skeletons and grave goods are found incomplete or disordered, often within intrusive cuts, while missing artefacts are sometimes indicated by the presence of small fragments or residual metallic staining. Thus, disturbed burials are usually labelled in cemetery reports as having been ‘robbed’. 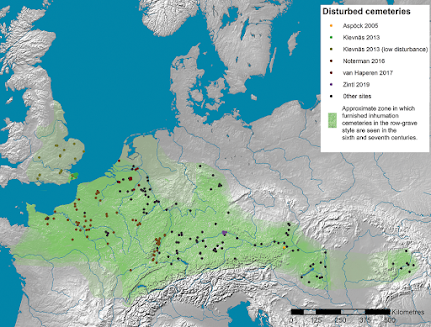 One of the problems with trying to do European archaeology it that it was traditionally a very local science, performed by local museums or amateur groups, the publications buried in the journals of regional antiquarian societies. None of the data these scholars cite is new, and much of it comes from the nineteenth century. The service they have performed is to assemble all that data into a single narrative covering a wide swathe of Europe.

The authors date this phenomenon to between 500 and 700 AD, mostly after 575. It was centered in the Frankish homeland, with extensions to southeastern England and Hungary, both areas of Frankish influence. They argue that this was not simple "robbing", because certain items were removed while others that seem equally valuable were left behind. They say that the three items removed most often were swords, seaxes – special Frankish knives – and brooches, and they argue that these were perhaps the objects most closely associated with the power and status of the deceased. (These are all elite people we are talking about, although some of them were not really aristocrats.) Were these objects sometimes only loaned to the dead, and then reclaimed by the living after a suitable interval? Could this be because the living felt a need to reestablish their claim to that inheritance by displaying or possessing the objects? Did it sometimes happen in cases of disputed legacy?