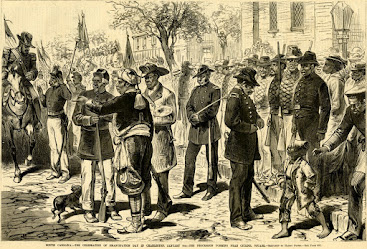 Forming up for an Juneteenth parade in Charleston, South Carolina, 1877

Juneteenth is an African American holiday that began in Galveston, Texas. On June 19, 1865, Gen. Gordon Granger, the new military governor of Texas, issued his General Order No. 3:

The people of Texas are informed that, in accordance with a proclamation from the Executive of the United States, all slaves are free. This involves an absolute equality of personal rights and rights of property between former masters and slaves, and the connection heretofore existing between them becomes that between employer and hired labor.

Not exactly a ringing endorsement of African American humanity – you're free, now buzz off and find a job – but it was the words "all slaves are free" and "absolute equality" that stuck with black listeners. They touched off a joyous celebration that lasted for days. Black churches in Texas began celebrating the anniversary the very next year. The event gradually spread around the South, some communities holding theirs on June 19 as in Texas, others choosing a locally important date. 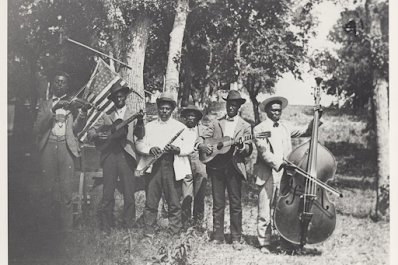 Some celebrations were held in public parks. When public officials, always alarmed by large groups of black people, tried to ban such events from parks, black people responded by pooling their money to buy parks of their own. In 1872 a group of black ministers bought ten acres of land that became Houston's Emancipation Park, which was the scene of Juneteenth celebrations, agricultural fairs, and other events for decades.

In the 20th century interest in Juneteenth declined. The big public celebrations faded away, although many churches continued to mark the day on their own calendars. Juneteenth had always been about the end of slavery, and that came to be less relevant as fewer people could remember it, and as the reality of life under segregation came to make it seem less wonderful. Focus shifted to the 20th-century Civil Rights movement, which is why the first Federal holiday celebrating the African American experience was M.L. King Day, not Juneteenth.

But now that people are talking a lot about slavery and its legacy again, Juneteenth is coming back into prominence. Big events have been staged in several cities in recent years. And now Congress has just voted to make June our newest Federal holiday.