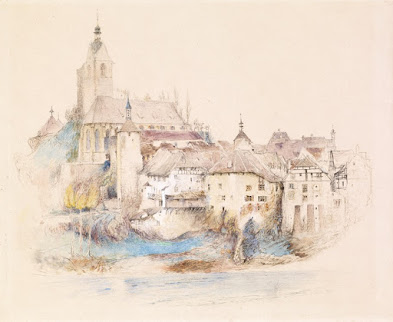 John Ruskin, Lauffenburg on the Rhine, 1863

Ingenuity, the Mars helicopter, has now made eight successful flights. Reading the mission web site it almost seems like things are going so smoothly the controllers are a little bored and not sure what to do next. After all the main point of this was to prove that it was possible.

Aerobics in the 1980s as a metaphor for the troubled intersection of feminism with individualism. (New York Times)

After medieval people began wearing pointed shoes in the 1300s, they started to suffer from bunions and in-pointed big toes, a condition called hallux valgus. The things we endure for fashion.

Study of metal objects from Bronze Age Scandinavia shows that they imported copper from both the British Isles and Slovakia.

The Hunchback of Notre Dame: how did Disney sneak "Hellfire," a song about lust and the fear of damnation, into a G-Rated movie? Partly by changing the story's ending and featuring lots of talking gargoyles, but mostly by the power of their reputation. Incidentally the word that most troubled the ratings board was not "hellfire" but "sin." (New York Times)

Meta-study and statistical manipulation suggest that if we all wore masks, the R (number of people each infected person infects) of Covid-19 would fall about 25%. Which is significant but by itself not nearly enough to prevent a pandemic.

Publishers are listing a whole bunch of books about social epistemology coming out this year, some by big writers like Steven Pinker and Daniel Kahneman. Titles include Eyes Wide Shut, Think Again, and Why Some People See Things Clearly and Others Don't. The intelligentsia are getting very worried about irrational beliefs.

Thomas Edsall asks why we are getting better educated – the high school graduation rate for African Americans is up from 73.5% in 1976 to 92.2% – but this is not decreasing economic inequality. He considers preschool, parenting styles, training in self-discipline, and more, but none of it strikes me as very interesting or persuasive. For one thing the sociologists he cites seem to think that parents can influence their children's educational and career choices. Ha! (New York Times)

In a case we discussed here in April, the Supreme Court has ruled 8-1 that a school cannot discipline a cheerleader for a profane rant posted to Snapchat over the weekend.

The blogger at Secretum Secretorum says the formation of new cults peaked in the early 1970s and has been declining ever sense. Some issues with the data set but at least he tried to find numbers.

Long, discouraging article by a CDC researcher who says rival scientists mounted a social media and whispering campaign against her for arguing that obesity is less associated with early death that some other studies had found.

Checking in on the people who would rather quit their jobs than go back to the office; this study found twice as many people wanting to stay home as wanting to go back.

Crazy politics in Michigan, where protests against the 2020 election results go on and threats of violence increase, mainly against the Republicans who control the legislature and most county governments. (Washington Post)

Did mammals replace reptiles at the end of the Cretaceous because hot-blooded animals resist fungal infection?

Berkeley's Roots of Structural Racism project may be politically tendentious but it is full of good data. Since 1990, residential segregation has increased in most US cities, and they have maps that show you the details. Here are some striking numbers for you: black children raised in mostly white neighborhoods end up earning $4,000 more per year than those who grow up in segregated minority neighborhoods; for Hispanics, it's $5,000.