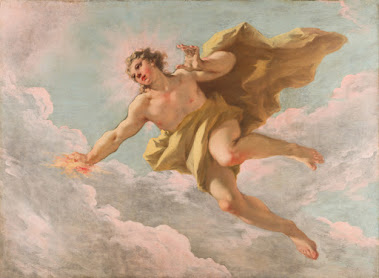 Apollo, Giovanni Antonio Pellegrini, 1718
The history and cartography of the Jewish Autonomous Oblast, a Jewish colony on the Amur River in Siberia, Stalin's attempt to create a Soviet alternative to Zionism.
Conor Friedersdorf looks into the numbers on police killings of minors in the US.
The strange career of Isaac Wright, former paratrooper and "urban explorer" who says illegally climbing skyscrapers and bridges eased his PTSD. The police were not impressed by this therapeutic technique. (New York Times)
My college classmate Naomi Wolf is banned from Twitter over her Covid-19 posts. Wags say she was actually banned for being too stupid.
New meta-study of sperm counts says the famous study of their decline is flawed because nobody knows what the baseline human sperm count is. (Study, NY Times story) I'm not convinced by this argument, either, because it is often possible to detect a change in something without being able to fully describe what it is.
This week's listen: Areni Agbabian, ethereal contemporary music influenced by Armenian folk songs. Patience, Petal 2.
Mesolithic people in Finland were buried with mysterious ornaments made of elk teeth. A new theory says these were sewn onto clothing, where their rattling made the rhythm for dancing.
Somebody in ancient Athens had a lot of enemies, tried to use a chicken sacrifice to curse 55 people at once. Seems ambitious for just one chicken.
Seventeen decapitated skeletons found in British cemetery dating to around 300 AD. They were most likely executed but since we know next to nothing about how justice was administered in Roman Britain it's hard to say if they were criminals, mutineers, rebels, or something else.
NY Times review of a new book about Otto Warburg, Nobel-winning German physiologist who studied cancer cells. Even though he was gay and had Jewish grandparents, he and his well-funded institute somehow survived Nazism, a mystery that this book does not resolve. Most likely Warburg was considered too important to liquidate by leading Nazis who were obsessed with cancer and the effects of diet on health. (Non-paywalled review here.)
In Elk Rapids, Michigan, one farm stand says "No Mask, No Service," while the other joined a lawsuit against the governor's mask mandate. Predictably, the county has now split into Friske Farm Market vs. King Orchards factions. (New York Times)
Scientists created a synthetic genome for a bacterium by stringing together building blocks of DNA — and the new genome made the microbe immune to viral infection. What could possibly go wrong?
Justin E.H. Smith thinks woke book critics are following in the steps of Stalin's literary bureaucrats.
Ndona Muboyayi is not on board with teaching Critical Race Theory to her children: "Showing up on time has nothing to do with being white. It’s something that you’re taught or not taught."
Hospital pharmacist pleads guilty to trying to spoil 50 doses of Covid-19 vaccine, believing that they were dangerous and could "change DNA."
Many Americans got used to cheap rides from Uber, subsidized meals from Grubhub, and other deals because venture capitalists were spending billions to get those companies established. Now the companies need to be profitable and as a result their prices are rising; the average Uber ride now costs 40% more than a year ago. (New York Times)
French writer Michel Houellebecq sees both Europe and Asia committing slow suicide via low birth rates. In Asia they keep out immigrants and so will simply disappear; in western Europe they are keeping up their numbers by admitting immigrants, so they will die by ethnic strife or cultural change. I think this is overblown, but the angst is real; one poll found that 45% of French people think civil war is imminent. It is a very common complaint in France that their politics have become just like America's, meaning all about race tensions.
The fight over India's new social media laws has tech companies crying censorship and invasion of privacy, while the Indian government complains of digital colonialism.
Huge collection of fabric swatches from Donald Brothers, Scottish maker of upholstery fabric, going back to 1896.
Reflecting on the publication of the Pentagon Papers, 50 years later. Ellsberg thought he was doing the people's will, but Nixon's landslide reelection after the Rand study was made public suggests that he was really opposing it. (New York Times)
And a piece by a Vietnamese writer pointing out that since the Vietnamese government still refuses to allow any access to its own records of the war, the Pentagon Papers dominate Vietnamese accounts of the war in 1954-1967. The records are not available to narrate the war from the Vietnamese perspective, so Vietnamese readers know much more about how American leaders viewed the war than how their own did. (New York Times)
Posted by John at 8:00 AM

Scientists created a synthetic genome for a bacterium by stringing together building blocks of DNA — and the new genome made the microbe immune to viral infection. What could possibly go wrong?

About as much as might go wrong simply from random mutations? Bacteria mutate constantly, in large part because of how often they reproduce. Arguably better to identify such a thing in a controlled lab where it can be purged, rather than have it show up randomly in the wild where it can become established.

Hospital pharmacist pleads guilty to trying to spoil 50 doses of Covid-19 vaccine, believing that they were dangerous and could "change DNA."

Many people view pharmacists as if they were something like doctors, but the reality is that pharmacists are more like cashiers in terms of what they need to know. There are a lot of dumb pharmacists out there who don't understand the first thing about medicine or science, because their job isn't actually to understand those things, it's just to exactingly follow procedure and dispense controlled substances in the correct amounts and with the correct labels, paperwork, and filing.

In short, pharmacists are clerks, not doctors.

G. Verloren said "In short, pharmacists are clerks, not doctors"

That is a grossly unfair assessment. Pharmacists spend 5 years studying biology, chemistry, and other sciences. They also face rigorous evaluations before being graduated.

I admit to wondering how one can earn a "doctor of pharmacy" in 5 years, but to say they are merely clerics mechanically following rote directions is absurd. While retail pharmacies do a great deal of such work, much of it is handled by pharmacy techs. The *pharmacists* deal with issues like verifying the dangers of interactions between different drugs and answering patron concerns.

Nowadays they also are tasked with giving vaccines.