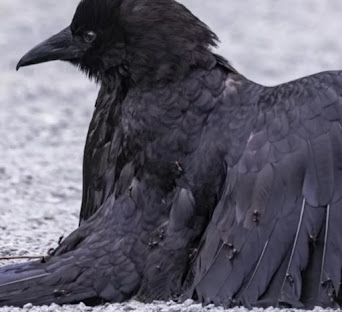 Photographer Tony Austin stumbled across a murder of crows while out walking and got out his camera.

But then one of the birds started acting strangely. Austin started shooting — and he was astounded later, when he enlarged his photos: The crow had large black ants all over its body.

"I noticed there were like little bumps all over this bird that was flopping around," Austin says. "And sure enough, it was covered in ants."

Even stranger, the crow had seemed to purposefully put ants on itself. Austin had been confused; now he was mystified.

The birds were "anting", a behavior that has been documented in more than 200 species. It comes in two forms. In "active" anting, which is much more widespread, a bird picks up one or more ants in its beak and rubs them through its feathers. "Passive" anting means lying down or dust bathing on an anthill and letting the ants crawl over. 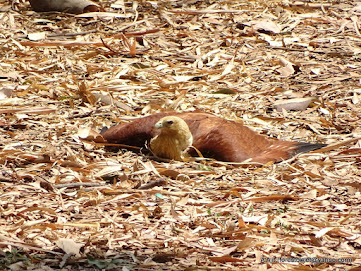 Nobody knows why birds do this. Birds have terrible problems with parasites; feathers are an incredible technology for everything from temperature regulation to flying, but they provide a whole world where fleas, lice, mites and other critters hide and thrive. So the most common theory is that the actively anting birds are trying to spread formic acid through their feathers to kill mites or lice, and passively anting birds are hoping the ants will feed on their parasites. The thing is, nobody has ever been able to show that this works. So some ornithologists have ended up arguing that birds do it because it feels good.

Another theory is that the birds' actual target is microscopic pests, but since people didn't even know we had microscopic parasites until 350 years ago, this seems unlikely to me.

So many weird and wonderful things in the world to learn about.

So, if they are doing this to "clean" themselves, would it be making a fountain out of an anthill?