Building 20 and the Creativity of Making Do 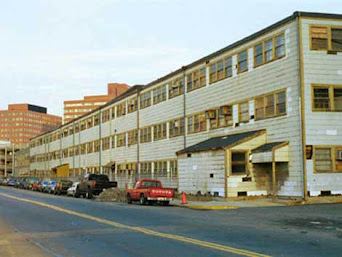 In How Buildings Learn: What happens after they’re built (1995), Stewart Brand sings the praises of a sprawling, ramshackle edifice at MIT known only as Building 20. Building 20 was a temporary structure erected during the Second World War for radar research. By the time it was finally demolished in 1998, this unpromising space had housed groundbreaking research on linguistics, acoustics, microwaves, video games and high-speed photography. Its horizontal layout, with lots of corridors and a lone vending machine to which everyone gravitated, forced people to meet and share ideas. It was a low-rent environment, free from turf wars because the turf – leaky, draughty, dilapidated – wasn’t worth warring over. The nuclear physicist Jerrold Zacharias, working on the first atomic beam clock, simply cut holes in the floor to make room for his equipment. Just by existing, Building 20 made creative things happen.

This reminds me of something Richard Feynman wrote in his memoirs about Princeton's electron accelerator, which in the 1930s was producing ground-breaking results. When he arrived on campus he immediately went to see it and was at first surprised that it was smaller and much less fancy looking than the one at MIT. He discovered that it was producing results because people were constantly tinkering with it, which they were doing partly because it had to be tinkered with all the time just to keep it running. Because it was old and unimpressive, nobody minded if junior professors or graduate students rewired it or added new experiments or whatever, so it got used in more creative ways. "People played with it," he wrote.

There is a kind of engineering creativity fostered by the struggle to keep barely functional equipment running. I have heard several older engineers complain that modern digital machines are really worse than the old analog ones, because you can't take them apart and modify them or fix them yourself when they go wrong. This belief that progress comes from messing with things, and therefore in having systems that are easy to mess with, runs deep. Many engineers trapped in big, bureaucratic operations where nothing can be done without years of budget wrangling and committee votes long for the Golden Age of their field, whatever their field is, when the equipment was cheap and they could just play with it until they produced something worthwhile.

In another realm, many 20th-century artists thrived in old warehouses with pathetic lighting and no heat, freed by the low rent and spaces nobody cares about to create path-breaking work.

Major institutions have tried to fight against the trend toward ever shinier, more perfect, less mess-withable systems, but this is hard to do when the equipment really does cost millions of dollars, the rent is high, and the power of ever-smaller chips in undeniable.

Creativity remains elusive and hard to plan for, and it sometimes seems to me that it simply springs up when an interesting technology reaches a certain stage, fading away when knowledge is more perfect and success becomes about carefully planning for another 1% advantage.