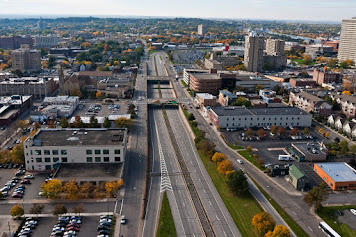 Urban freeway in Rochester, NY before removal
Interesting feature in the New York Times today about plans to demolish urban freeways across the US, which is part of Biden's unpassed infrastructure program. These roads have always been controversial; many were fought before and during construction in the 1950s and 1960s, and quite a few planned roads were blocked. Most were routed through poor, minority neighborhoods, because that was a lot easier and cheaper than trying to demolish middle class white neighborhoods. 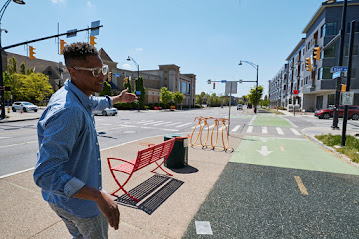 The idea behind these roads was to make it easier for people with jobs in the city to commute in from the suburbs. Living in the city was not much on anyone's mind; middle class people were moving to the suburbs by the millions, and cities were desperate to hold onto their downtown office districts as their only possible lifeline to the future. If that meant demolishing a few square miles of "slums," so be it. I remember "city of tomorrow" drawings from that period that showed central cities with essentially no housing, just office towers and freeways.

Now people are hoping that demolishing freeways will revitalize inner cities by making them better places to live. And that could work. But, again, there will be a cost:

A common argument, said Mr. Dunwoody, the artist and community organizer, is that if the highway is removed “folks are now going to be looking at our neighborhood, and bringing in yoga studios and coffee shops to move us out. People don’t want to get gentrified, get pushed out, get priced out.”

But they most certainly will. If we move to a model where people live closer to their work, then the people who work in downtown office towers will have to move to inner city neighborhoods, bidding up the price of nearby housing. There is no other way to reduce commuting. Rents and house prices have been low in some neighborhoods because nobody with money wants to live there. If commuting decreases, that will change.

Across the country, attempts to prevent "gentrification" have almost all failed; we just don't have the stomach for the sort of draconian limits on who can live where that would stop it. Plus, cities all depend on property taxes for most of their revenue, so any policy that keeps property values low hurts them.

Of course the other solution would be to move the jobs out of the cities to new office parks in the outer suburbs, and making commuting to cities harder will probably cause some of that, too. Who does that help? It certainly won't reduce CO2 emissions. I know some of you are thinking, "switch to commuting by rail and subway," but just try to build a new rail or even streetcar line in the US today. It has taken 35 years to build Maryland's Purple Line and it still may not ever be finished, plus the construction of new transit stops drives up local rents even more than tearing down highways.

Two major trends in America are colliding here: the push to reduce CO2 emissions and the rising price of urban housing. It looks to me like they are going to keep colliding, and grinding a lot of people between them.

I am always bothered when people speak about one issue in isolation, not even considering how it relates to anything else. The people pushing to demolish urban freeways seem to have no broader vision for a nation with a rising population increasingly concentrated in the biggest cities. They just want the eyesore in their neighborhood gone, and they imagine that can happen without anything else changing.

I don't think that can happen.

1. The pandemic and how people over the long term react to it. Watching New Yorkers catch it like they were flies was an eyeopener, not one soon to be forgotten.

2. Related but separate is what happens to Working from Home. My guess is employers will embrace the idea short-term but sour on it long-term. Right now we have technology corporations embracing Work From Home. For example, Jack Dorsey has promised his employees they will never have to work in the office again. If enough corporations do the same, that's a game changer.

3. It is said innovation happens in the cities, but I think that's not quite correct. Innovation happens where universities and private industry come together and work together. That is often in a city or a major suburb close by, but it doesn't have to be that way.

If people want to live in cities, close to where they can work...

...but there's too much competition for space in cities, and prices are too high...

...then why don't we just... create more cities? Or build up smaller cities into larger ones? We have lots of space, we have lots of under-developed parts of the country... why not just fill out that space with more cities, and create incentives which encourage people to move to them?

Seriously, the Romans used to plan some cities a century in advance, why isn't the US government doing something similar on a much faster modern timescale?