The Roman Villas of Boscoreale 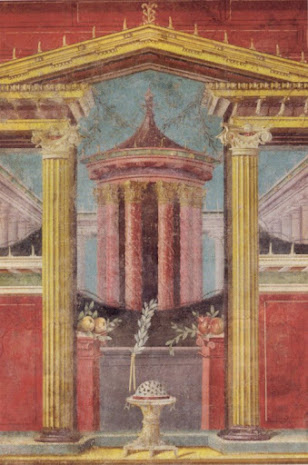 Boscoreale is a district of Naples where the eruption of Vesuvius in AD 79 buried a series of Roman villas under about 8m (25 feet) of volcanic tephra. The villas were not discovered until the second half of the 1800s, more than a century after Pompeii and Herculaneum. Only one of the villas can be toured today, and that the most plebian of the lot; the others were reburied after excavation. Most famous are the villa of Publius Fannius Synistor and the Villa della Pisanella. 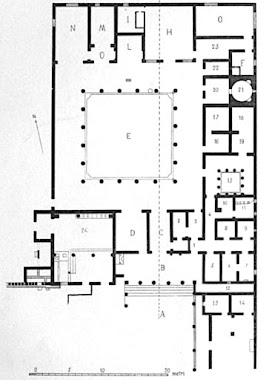 Plan of the Villa of P. Fannius Synistor 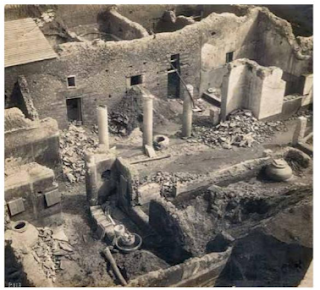 This villa was excavated by the landowners in the 1890s; above is a view of the dig from the edge of the 8m-deep pit. It was not especially large and did not have a sculpture collection. 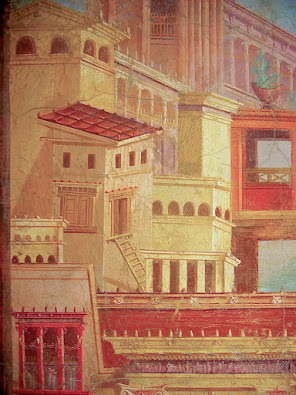 What it did have was an extraordinary array of frescoes. Most of these were already a century old when the villa was buried. This was somewhat unusual in the Roman world. Most rich Romans seem to have repainted their houses every few decades in up-to-date styles rather than tolerating worn, faded, out of fashion paintings. 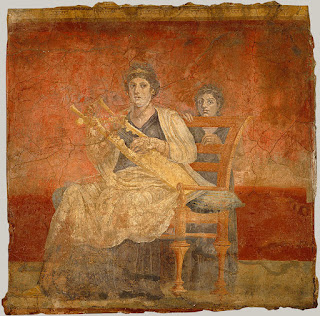 Perhaps the owners of this villa (P. Fannius Synistor seems to have been one, but there are other candidates) were not as rich as they had once been, so they put off repainting, or perhaps they simply knew they were not likely to get anything better than the magnificence they already had. 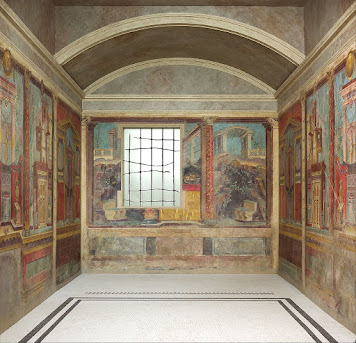 The 19th-century owners of the property cut the frescoes out and sold them; some are in Naples but the biggest lot ended up at the Metropolitan Museum in New York. They got the whole cubiculum or master bedroom, which you can see above as it was installed in 2007. 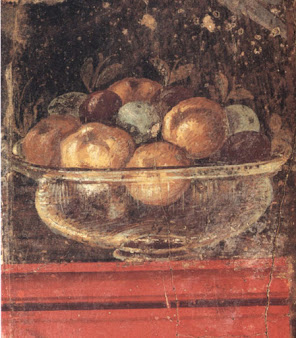 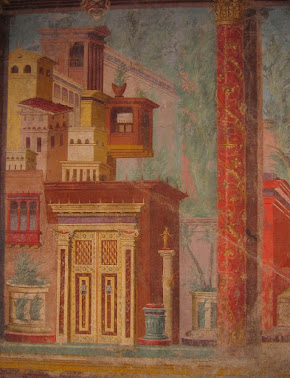 More. The painting at the top of the post is also from this villa. The Met has a whole book on the villa you can read online, produced for the reinstallation of the collection in 2007. 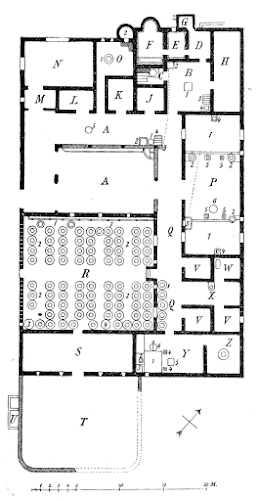 Plan of the Villa della Pisanella 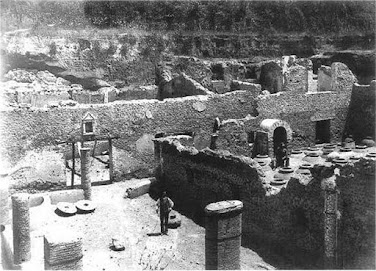 The Villa della Pisanella was discovered in 1876 but mainly excavated in the 1890s. This photograph shows part of the storage area for olive oil that was a striking part of the complex. 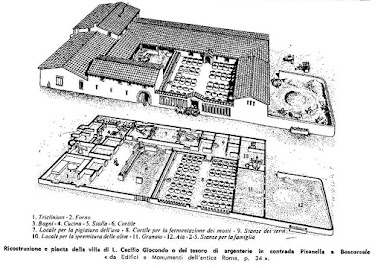 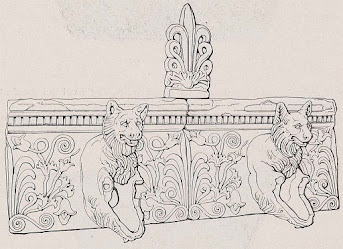 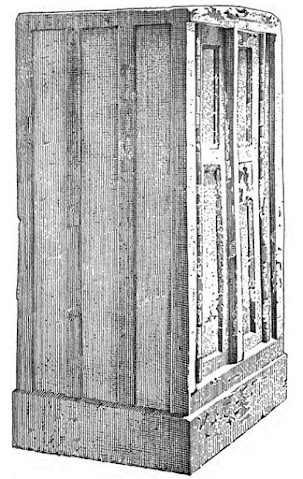 Plaster cast of a wooden cabinet preserved as a void in the volcanic material. 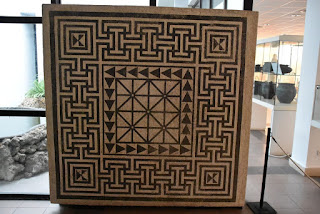 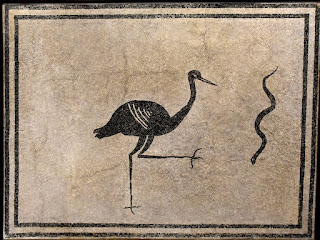 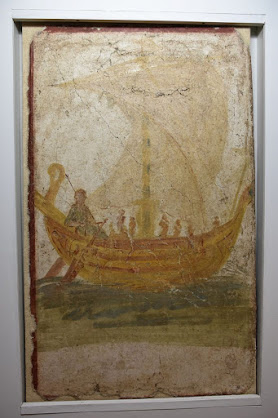 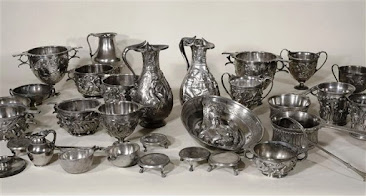 But the most remarkable discovery at the Villa della Pisanella was the skeleton of a man, one of three people trapped in the house when it was engulfed, and the chest he seems to have been dragging out of the house. The chest was full of silver, 102 pieces that we now know as the Boscoreale Treasure. 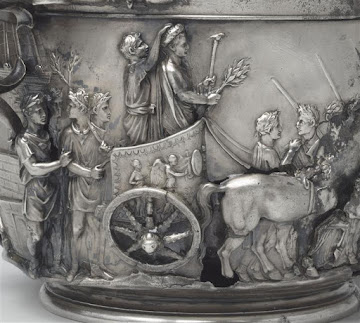 I'm not clear on what Italian law said about excavated antiquities in this period, but various sources say that the silver treasure was smuggled out of the country and sold illegally. I haven't seen any such statement about the frescoes, so maybe the law on architectural elements was different from that covering treasure. (It certainly was in England.) Anyway when this stuff started showing up on the black market in France Baron Edmond de Rothschild heard about it and sent his agents out to track it all down; he managed to buy about 90 percent of it, and those pieces ended up in the Louvre. 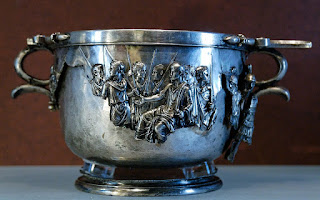 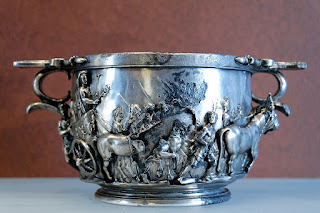 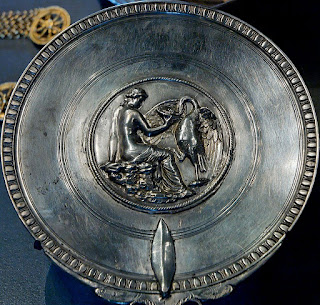 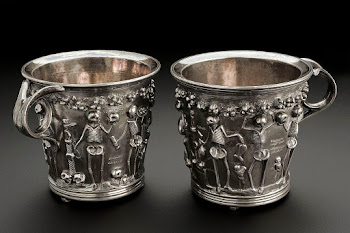 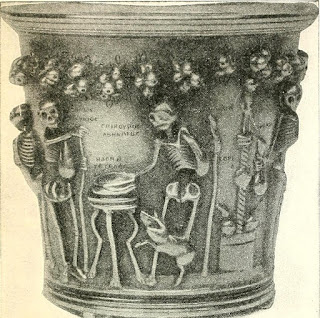 Modern copy of a remarkable cup, and 19th-century drawing. Not sure why there aren't any contemporary photographs of the original, but I can't find one. Certainly doesn't look like any other piece of Roman art that I know. 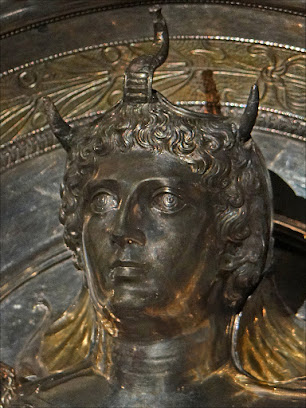 What an extraordinary array of art from just a handful of middling villas, buried by chance in one dreadful afternoon. 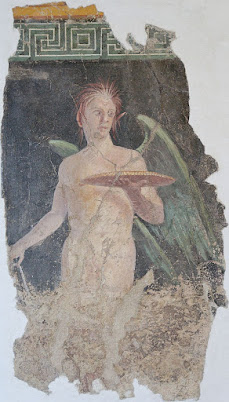 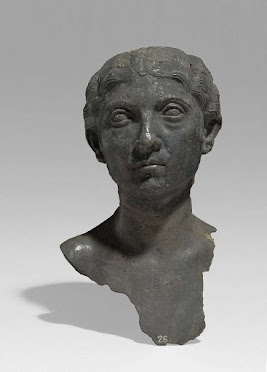