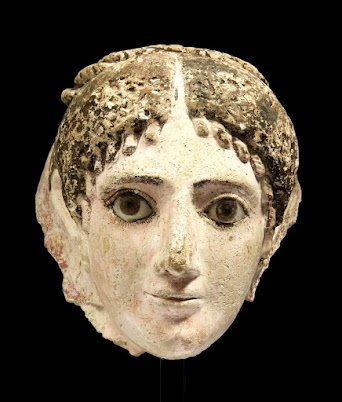 Quintus Valerius Soranus was a Latin poet, grammarian, and tribune of the people in the Late Roman Republic. He was executed in 82 BC while Sulla was dictator, ostensibly for violating a religious prohibition against speaking the arcane name of Rome. And here is a theory that Ovid was exiled for hinting too cleverly about the secret name, which (says the author) connects the Seven Hills of the city to the Seven Stars of the Pleiades. Who knew Rome even had a secret name? Wonderful.

More artifacts found in pits at the Chinese archaeological site of Sanxingdui. (Previously on this site here.)

Does a single brain dysfunction, sometimes called the "p factor", underlie many different psychiatric conditions? One piece of evidence is that the siblings of people with schizophrenia are more likely than others to have a wide range of not obviously related mental problems: depression, ADHD, etc.

Anne Boleyn's prayer book, from which she read on the morning of her execution, was preserved within a network of her female relatives – a subversive act which could have gotten them executed – and the names they wrote in it as they passed it around can be read with ultraviolet light.

Ross Douthat says Foucault is now more cited on the Right than the Left. After all his whole project was to criticize the web of Power/Knowledge that controls the world, and if most of the knowledge and power are on the left, then it's the right than can make better use of Foucault. Who has been saying "Trust the science'? (New York Times)

Tyler Cowen says economists no longer argue policy via articles and books but on Twitter, and "This is not necessarily progress."

As a struggling, unpublished novelist John Steinbeck wrote a werewolf mystery novel, the manuscript for which is still held by his estate. Since the title is "Murder at Full Moon", I doubt it is very good, but one is still intrigued.

Is WNYC experiencing an epidemic of bullying or an epidemic of whining? (New York Times) Fascinating that the station has seen multiple cases of people accusing each other of bullying; seems like this happens in the aftermath of shouting matches.

Authoritative-seeming take-down of recent UFO videos; many of the objects may be camera artifacts, or else their extraordinary movements are actually caused by movement of the camera itself. With links to video analysis.

Forest gardening – modifying tracts of forest to contain more plants useful to humans – was practiced by native peoples in coastal British Columbia. What looks like a hemlock forest to you was a carefully maintained landscape containing unnatural concentrations of berry bushes, plants with edible roots, etc.

Phone shaking device that allows you to earn fake steps and miles, for fitness challenges and games like Pokemon Go.

The US housing market is insane.

A plague of mice is threatening the agricultural areas of southeastern Australia.

California has a "red flag" law that allows the police to seize weapons from people deemed a threat to the rest of us. The law has been invoked 3,000 times in five years. But it didn't stop the actual San Jose shooter even though he sounds like a good candidate for red flagging.

Mindat is a town of about 50,000 in a forested, mountainous part of Myanmar. Many people there have guns, because hunting is a big part of local culture. When Myanmar's military launched their coup the people of Mindat resisted, using their hunting rifles to drive away the first small forces sent against them. But eventually the military got serious and sent in a heavily armed battalion, driving the resbels into the forest. In the end their resistance only made things worse. Depressing for gun lovers but also for anyone who cares about human freedom.

Clicked through on the housing market thread, all of it reinforces the things I've been noticing and thinking for a very long time, but one line in particular struck me:

So much of American politics feels dominated by the middle class, many of whom (particularly the upper middle class) are woefully out of touch with how bad things actually are on the ground for their lessers, being as they are so much less affected by these kinds of issues. This was true with the 2008 recession, and it's true now.

The people being squeezed worst by these crises are the poorest and most vulnerable, and yet the consistent response to people talking about how hard hit they've been has been incredulity and disbelief from others, who are falling into the common trap of thinking their own experiences are universal, and discounting the possibility of other people having experiences that don't match their own. They inherently can't empathize, to the point of also refusing to sympathize.

"Mindat is a town of about 50,000 in a forested, mountainous part of Myanmar. Many people there have guns, because hunting is a big part of local culture. When Myanmar's military launched their coup the people of Mindat resisted, using their hunting rifles to drive away the first small forces sent against them. But eventually the military got serious and sent in a heavily armed battalion, driving the rebels into the forest. In the end their resistance only made things worse. Depressing for gun lovers but also for anyone who cares about human freedom."

It always boggles my mind that there are so many people who think they can somehow magically defeat a modern military force with robust supply lines, military vehicles and equipment, advanced communications, professional tactics and coordination, etc.

When the other side has tanks, jets, APCs, rocket launchers, infrared vision, radar, the best maps, secure radio and satellite communications, a vast and constant resupply potential, and all the rest, I'm sorry, but you're simply not going to win against that with only your own private gun collection and a year's supply of canned beans. How astoundingly stupid and delusional do you have to be to even try? I have to assume it's some sort of Dunning-Kruger effect in action.

That review of 1001 Nights is absolutely brilliant.