Bad Poetry, Mathilde Blind, and the Purpose of Literary Scholarship 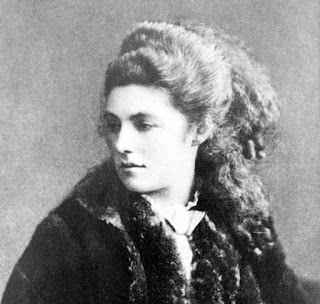 Mathilde Blind (1841-1896) was an English poet. I never heard of her until I read a little essay by Margaret Drabble in the TLS titled "Scholarship Girls." This begins with an interesting meditation on class, money, and scholarships in British higher education; it turns out that among other honors Drabble once won a scholarship endowed by Mathilde Blind.

Blind (which rhymes with "twinned") was a child refugee from the tumultuous Europe of 1848, and her brother later tried to assassinate Bismarck. She led a life of feminist politics and so on, traveled to Egypt, seems like an interesting person. Drabble writes,

Her poetry, like all poetry by once famous and neglected women, is in the process of being rediscovered.

There is a recent scholarly biography by an American academic, James Diedrick. But

It has been reproached for taking a male point of view, and Diedrick has had to defend himself against allegations of suppressing her supposed sexual orientation: see his online essay, "Queering Mathilde Blind."

All of this interested me enough to look up Blind's poems; there are a lot online these days. You can peruse a wide selection here, should you be in the mood, but here is what I swear is a representative passage:

I am athirst, but not for wine;
The drink I long for is divine,
Poured only from your eyes in mine.

I hunger, but the bread I want,
Of which my blood and brain are scant,
Is your sweet speech, for which I pant.

Which leads me to ask why various academics would devote their attention to restoring the reputation of an awful poet. What does one say about this:

OH haste while roses bloom below,
Oh haste while pale and bright above
The sun and moon alternate glow,
To pluck the rose of love.

Yea, give the morning to the lark,
The nightingale its glimmering grove,
Give moonlight to the hungry dark,
But to man’s heart give love!

I suppose it depends on what you think literary scholarship is about. If you think it has something to do with proclaiming the greatest works of human imagination to the ages, Mathilde Blind hardly belongs.

But if what you are doing is a sort of social history, maybe the most mediocre of mediocrities is exactly what you should be reading. After all the Victorians wrote, published, and read tens of thousands of poems like these. Blind took on many of the commonplace themes of the day: love, motherhood, the fleeting nature of human life and happiness, the mystery beyond, etc. She could turn a wide variety of feelings into terrible verse, as in "Nuit":

The all upholding,
The all enfolding,
The all beholding,
Most secret Night;
From whose abysses,
With wordless blisses,
The Sun’s first kisses,
Called gods to light.

And if what you want is to read about people of ambiguous sexuality, who were rumored to be involved with both women and men, fine, go ahead.

But is there something missing from this approach? Is literature something more than just what happened to be popular at some past time? Should we not care whether art is good or bad? Shouldn't literature professors be able to tell a good poem from a bad one, or is that a bit of outdated snobbery?

Me, I can't imagine devoting so much attention to a bad poet, and the notion that one of Blind's poems recently appeared in an anthology of English poetry turns my stomach. True, equally bad poems by straight men have also appeared in anthologies, but that's hardly an excuse to reprint this:

OH, beloved, come and bring
All the flowery wealth of spring!
Though the leaf be in the sere,
Icy winter creeping near;
Though the trees like mourners all
Standing at a funeral,
Black against the pallid air
Toss their wild arms in despair,
With their bald heads sadly bowed
O’er dead summer in her shroud.
Yea, though golden days be o’er,
If you enter at my door,
Spring, dear spring, will come once more.
There will break upon the night.

Me, I can't imagine devoting so much attention to a bad poet

If there is one thing I've learned, it's that there is no shortage of attention to devote to anything.

Someone, somewhere, will cheerfully spend every spare waking moment considering things you personally don't care about or understand why someone else might care about.

Someone, somewhere, is genuinely fascinated by watching paint dry - and that's not ANY less valid a usage of their time than being a connoisseur of fine wines, or studying the battles of Napoleon, or listening to Beethoven, etc.

Whenever I find myself sputtering with confusion as to why someone, somewhere, enjoys something which I "can't imagine devoting so much attention to", I remind myself that the flaw is not with their attentions, but with my imagination.

Your problem here, John, is that you are treating your opinion on the quality of this poetry as if it is incontrovertible fact - objective truth, rather than wholly subjective opinion. I happen to share your opinion that the poems aren't very good... but with the caveat that that is merely my opinion, and that other people must surely disagree with it, some very strongly.

I recognize that there's no real measure of a poem's "quality" - such a thing does not actually exist. There is simply individual taste in poems, and broader popularity of them. It's like pineapple on pizza - there's no "correct", universal answer that can be said to be true. It's wholly subjective. It's personal taste. Different strokes for different folks.

I offer you the same advice I repeatedly tell myself - let people enjoy things. Yes, even things you personally don't enjoy. Take things in stride rather than being shocked and incredulous. Otherwise you promulgate a closed mind, and a dangerous reflex to judge things negatively simply because you don't understand them or don't personally agree with them. It's fine to not like things - but it's arrogance and stupidity to assume other people are somehow wrong for liking what you don't. That's a trap I've fallen into myself many a time.