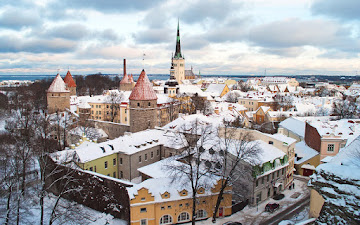 Tallinn is a beautiful old city on the Gulf of Finland, now the capital of Estonia. It has lately become a tourist destination mostly thanks to the boom in Baltic Sea cruises, which make Tallinn a key stop along with Copenhagen, Stockholm, and St. Petersburg. The population is about 440,000, including 230,000 Estonians and 160,000 Russians. 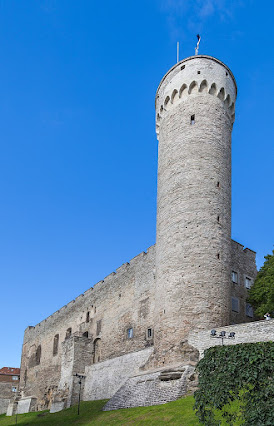 Tallinn has a long history of being passed back and forth between empires – Danish, Swedish, Russian, besides various crusading orders – so it has always been a multicultural place. These days it faces in one direction toward the Scandinavian world and in the other toward eastern Europe. When Estonia declared independence from the Soviet Union in 1991 many people thought the presence of a large Russian minority would lead to big trouble, but so far at least that hasn't happened, and Estonia has no more than the usual assortment of national crises. 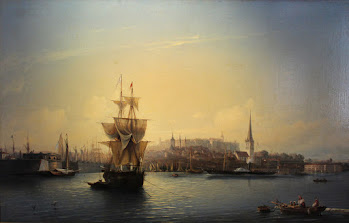 Tallinn harbor in 1853
The Estonian language is sister to Finnish, but a strange sister indeed, with 16 case endings and eight dialects even though there are only a million speakers. Ask how this was possible, linguist John McWhorter said it's because the community is small and no outsider ever learns the language, so it has grown inward into intense complexity. Since nobody else speaks Estonian, Estonian education places a heavy emphasis on learning foreign languages, especially Russian, English, and Swedish. 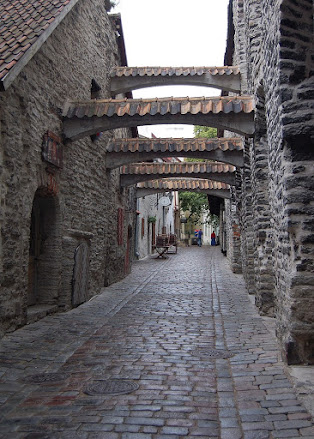 Archaeologists say the site has been occupied since Mesolithic times, but the city's history really begins in the 1200s with the Northern Crusades. The Northern Crusades have mostly been forgotten by westerners but they were a huge deal in the 1200s and 1300s, drawing in many young nobles from Germany and England and forcibly converting hundreds of thousands to Christianity. Several different crusading orders were founded, most famously the Teutonic Knights. 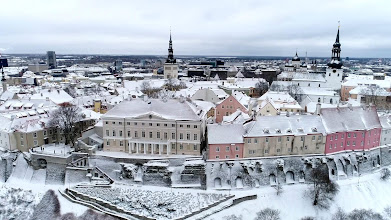 The Teutonic Knights controlled huge territories and fought wars against the kings of Denmark and Poland, among others. They seem to have been thoroughly obnoxious people, which may partly explain why pagans in Prussia, Latvia and Estonia resisted Christianization so stubbornly for so long. (There were five Prussian uprisings, for example. I can't resist mentioning that Prussian paganism is one of my arcane hobbies, the sort of thing I love because it is extremely weird and known only from late, fragmentary sources of dubious authenticity. I have a strange fondness for topics that can only been seen through a glass darkly.) 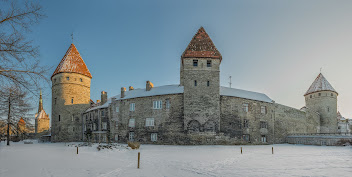 Founded by crusading knights –probably the Brethren of the Sword, which is a real thing and not from a bad video game– Tallinn was taken over by the King of Denmark in 1219. In 1285 it became the northernmost member of the Hanse, an association of trading cities, and it prospered as the connection point between the Hanse and Russia. The oldest structures in the town date to around 1300, including the foundations of the wonderful walls. In this period it was known to non-Estonians as Reval. In 1346 the King of Denmark sold the city to the Teutonic Knights, which made little difference to the townspeople since they mostly governed themselves like other Germanic trading cities; now they paid their taxes to German-speaking knights instead of Danish royal officials. Documents recording the sale say the population of the town was 8,000. 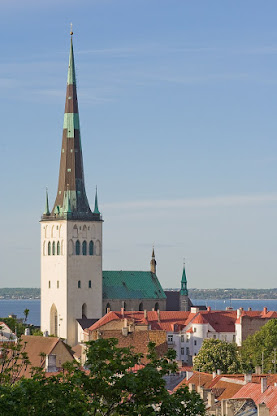 St. Olaf's Church, dating mainly to the 14th century, the central church for the Danish community. Tallinn was bombed by the Soviets during World War II, but I have not been able to find out much about how much of the city was destroyed. I did learn that while two of the other churches in the old city were destroyed, this one was not. So the destruction was not total. 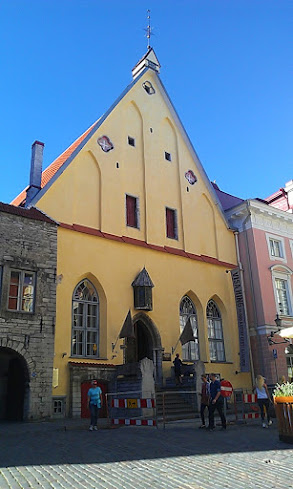 The old Guild Hall, now the Museum of Estonian History. 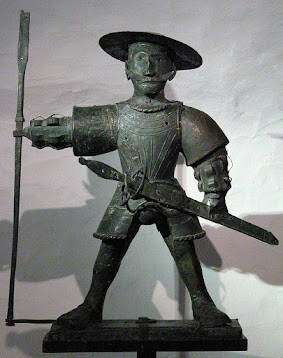 This figure, known as Old Thomas, was part of a weather vane installed on the Tallinn Town Hall in 1530 and became one of the symbols of the city. 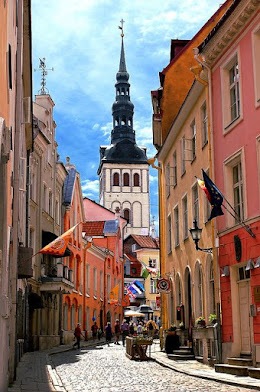 The townspeople were early converts to Lutheranism, so the great old churches are all Lutheran. A series of wars in the 1500s destroyed the Teutonic Knights, and in 1561 Reval became a dominion of Sweden. Tallinn's wonderful Old Town, the center of the tourist experience, grew up mostly in the 1350 to 1600 period, and contains many late medieval buildings. The layout of the streets and squares also dates to this time. 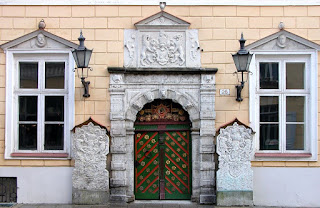 Here's an interesting structure, the Black Head House, 16th-century headquarters of an association of merchants and ship owners that lasted long enough for the last Tsar to be an honorary member. I wonder, were they the Black Heads to distinguish themselves from yellow-haired Swedes? 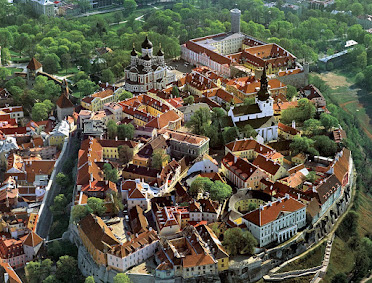 Tallinn actually has two distinct historic districts: the Old Town, which was the mercantile center, and Toompea or Cathedral Hill (above), the traditional seat of government. The hilltop palace once used by Swedish and Russian governors now houses the Estonian Parliament. (Actually in the 1700s Tallinn had three distinct districts: Old Town, which was mostly German or Swedish speaking, Toompea where the foreign governor and his minions resided, and a large suburb where the Estonians who had migrated in from the countryside lived. If any of that suburb survives, I haven't found any pictures of it.) 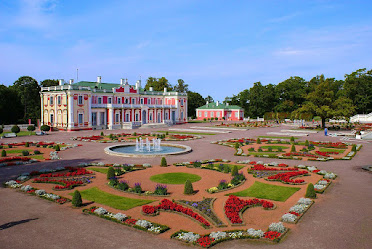 After the Great Northern War, Estonia passed under Russian control. Peter the Great and subsequent modernizing Tsars liked Tallinn, regarding it as a useful window to the west, and patronized harbor improvements and so on. They built this palace for the imperial governor. 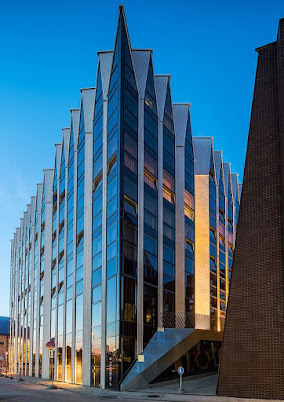 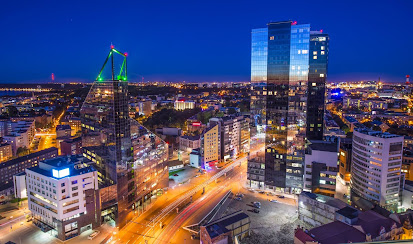 The 19th century brought industrialization, and Tallinn spread far beyond its old limits. Should you get tired of quaint old things you could always take a detour to the modern heart of the city just a kilometer away, which boasts several striking buildings in a Scandinavian modern style. 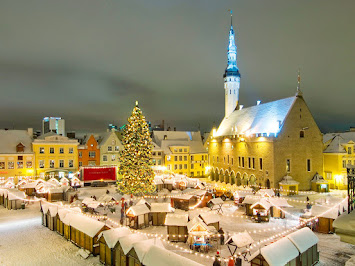 Some tourist sites advise you to visit in the winter, when the town is most beautiful (they also say this about St. Petersburg); as with most cities in northern Europe it hosts a grand Christmas Market all through December. On the other hand it is cold, snowy, and gets only 5 hours of daylight. 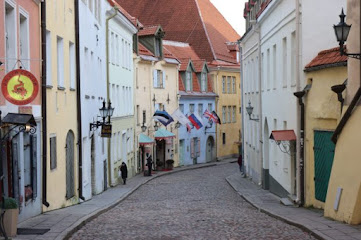 Estonia declared its independence from Russia in 1918, only to be conquered soon thereafter by the Soviets. Today the city has a Museum of Occupation covering the period from 1918 to 1991, with alternating exhibits on atrocities by Soviets and Nazis. Eastern Europe had a tough 20th century. 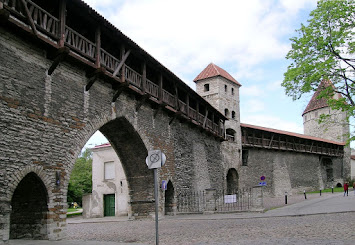 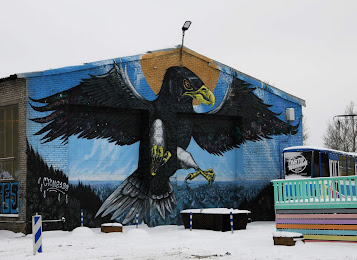 But so far the 21st is going well for Tallinn, and thousands of visitors have loved this city and sung its praises. I hope I get there some day. 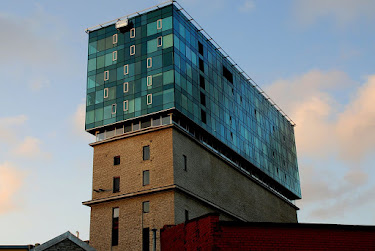 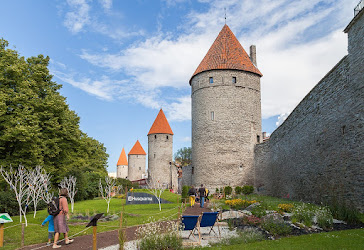 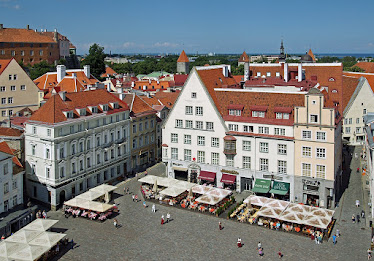 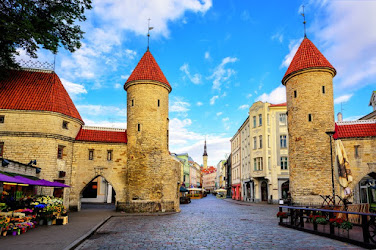