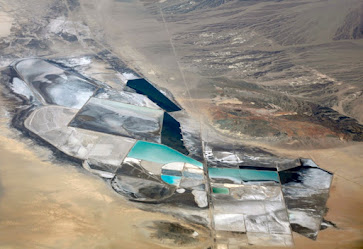 If we're going to move to an electrified future, we need a lot of batteries. Making batteries takes a lot of metal, especially Lithium and Cobalt. Modern metal mining is a hugely destructive process, involving blasting away whole mountains. This creates a serious environmental trade-off problem.

Environmental activists have spent decades fighting the opening of new mines and the like, because, well, there isn't much you can do to a mountain worse than blasting it away and digging a gigantic pit where it used to be.

(There is an alternative to batteries, hydrogen-powered fuel cells, but this comes with two big problems: it requires us to create a vast new infrastructure for making and distributing hydrogen, and, for reasons I don't fully understand, the technology seems to be at least a decade behind batteries. So over the next 20 years it's batteries or oil.)

Which brings me to an interesting article in today's New York Times about Lithium mining in America. There is currently only one Lithium mine in the US, and it produces only about 10% of what we use. The Trump administration was determined to change that and as one of its last acts approved a new mine on Federal land in Nevada, called Lithium Americas. And this is another Trump policy Biden's people seem determined to push forward:

Most of the raw lithium used domestically comes from Latin America or Australia, and most of it is processed and turned into battery cells in China and other Asian countries.

“China just put out its next five-year plan,” Mr. Biden’s energy secretary, Jennifer Granholm, said in a recent interview. “They want to be the go-to place for the guts of the batteries, yet we have these minerals in the United States. We have not taken advantage of them, to mine them.”

In March, she announced grants to increase production of crucial minerals. “This is a race to the future that America is going to win,” she said.

So far, the Biden administration has not moved to help push more environmentally friendly options — like lithium brine extraction, instead of open pit mines. The Interior Department declined to say whether it would shift its stand on the Lithium Americas permit, which it is defending in court.

There is even a proposal out there to invest $10 billion of the infrastructure bill into Lithium extraction and processing.

Biden and his people do seem to be serious about climate change, but they are also serious about putting America first, and about creating blue collar jobs. Biden is the sort of Democrat more comfortable touring a factory with Union reps than communing with the mountains. His climate change policy is all about building things: more solar farms, more wind farms, more lithium mines, more battery factories. Other approaches are possible, for example getting more serious about recycling –hundreds of tons of Lithium end up in landfills every year – and reducing our energy consumption. But "build more stuff" is probably the most realistic approach over the next few decades. We're going to lose a few dozen more mountains, but to me that seems better than the risk of frying the planet.