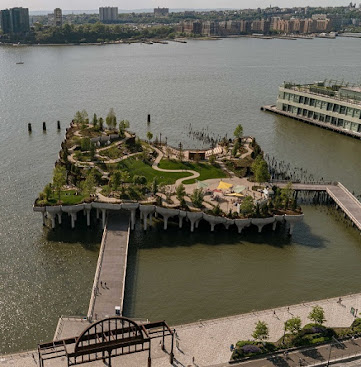 Among the casualties of Hurricane Sandy was Pier 54 in Manhattan, where the Carpathia brought the survivors of the Titanic to land. The pier had not seen a ship in many years but it was used for concerts and rallies and the like. Sandy damaged it so badly that it had to be torn down. Adjacent Pier 55 was equally derelict. 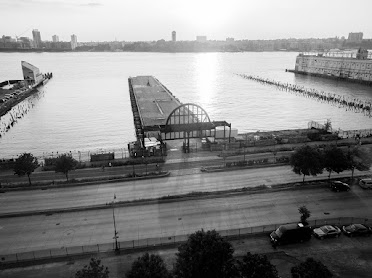 Thinking about what to put in place of the crumbled piers, somebody from the Hudson River Park Trust decided to approach magnate Barry Diller, who was rumored to be looking for a civic project on which to spend some of his ill-gotten gains. Diller was intrigued, and when he saw preliminary designs by English architect Thomas Heatherwick he fell in love. 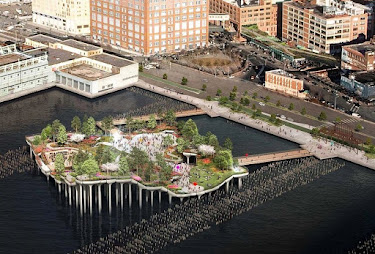 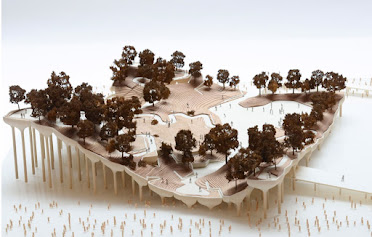 Supported on a forest of tulip-shaped concrete columns. 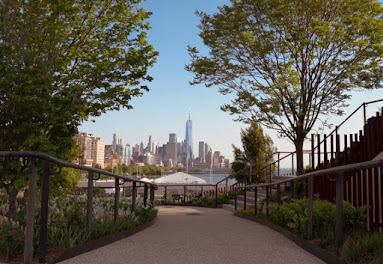 But, of course, people objected. Opponents branded the project "Diller Island" and said that this billionaire's playground would draw funding from completing the broader project of Hudson River Park, harm fish, shut ordinary people off from the waterfront, and so on. It turned out that the funding for these harassing lawsuits came from a rival mogul who hated Diller and had an old grudge against the Hudson River Park Trust. Environmental review found no impact to fish, and since all the funding was coming from Diller you would think the financial angle wouldn't hold water. But with no end to lawsuits in sight Diller backed out in 2017. 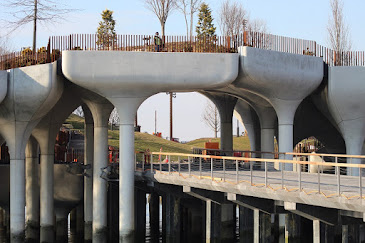 At that point Governor Andrew Cuomo stepped in and brokered a deal, offering $100 million in state funding to complete the rest of Hudson River Park and a promise to protect fish breeding zones in the Hudson estuary. The opponents of the project accepted and the project was revived. 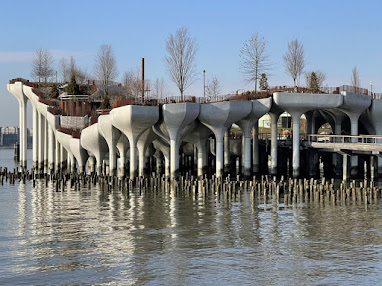 Which brings me back to one of my favorite topics, why it is so hard to build anything in our society. In a mechanical sense there are two parts to the problem: first, there are many points at which pressure may be brought to stop a project, because of the many approvals and reviews that area needed: zoning boards, local governments, state agencies, Federal agencies, environmental review. Second, there are lots of organizations which will eagerly step up to oppose anything that violates their vision of their own communities. That vision might have many parts, but some of the most common are: preservation of historic neighborhoods and buildings, public access, public parks, traffic reduction, discouraging fossil fuel use, keeping rents low, and preventing change in general. 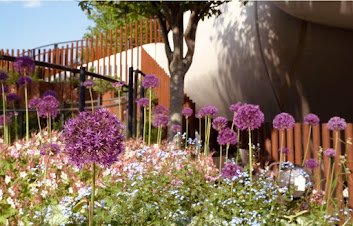 Is that a good thing or a bad thing? Anarchists like to fantasize about a world in which nothing happens until neighbors have hashed it out in meetings where everyone gets his or her say, and the approval process in many American cities has a big element of that. Many highways etc. that I think would have been disastrous have been blocked in this way; in the 1970s Maryland planned to build a giant spaghetti bowl bringing together Interstates 95 and 70 in downtown Baltimore, right where the Inner Harbor now is, destroying the wonderful Fells Point neighborhood as well. 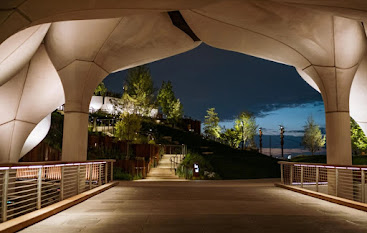 On the other hand all of this makes it very difficult to build housing, especially affordable housing; you can count on bitter neighborhood opposition to any plan for affordable apartments. Also public transportation; there is no Metro stop in DC's Georgetown neighborhood because the neighbors raised hell about this open door to riffraff from the rest of the city. And the cost is often staggering. When the US military began doing its BRAC (Base Realignment and Closure) process they counted on getting a lot of money from selling valuable properties like the Presidio in San Francisco and, closer to my home, the Naval Academy Dairy Farm. But the neighbors in all these places raised such a ruckus that none of this valuable land was actually sold for development, costing us taxpayers $500 million or so.

Sometimes I think the biggest loss is all the time and effort people put into getting these projects built; thousands of hours of human talent went into overcoming objections to the new light rail line in suburban Washington. What could we do, if our planners, engineers, and politicians did not spend so many years of their lives fighting these battles?

If we could build things as quickly as we once did, would that lift our spirits out of our angry malaise? Would that be worth the inevitable losses, including the loss of a sense of control over our own communities?

"If we could build things as quickly as we once did, would that lift our spirits out of our angry malaise?"

I think the answer would be the same as your answer to those who say, "It's the internet that's making us so divided!" It's not some simple, external thing that's making us this way, which we could easily get rid of and make it all better; it's us, making each other feel this way. All that resistance represents some group of humans with objections. Giving them a say and following complex procedures that give everyone a say is part of our freedom, the same as due process at law and giving defendants a right to defend themselves is part of our freedom.

A society can afford itself a temporary sense of shaking off malaise and moving forward, mainly by deciding that some group of its members is to be justly deprived of their right to complain or resist or speak up at all--that is, by placing all the malaise on some group and letting them go ahead and suffer, one way or the other. Sometimes this cruelty can have an appearance, and maybe some substance, of justice, as when it is decided that Group A has held too much (wealth, status, power to get what it wants, whatever) and it's time for Group B to get some of that.

I'm of course depicting social life as a zero-sum game. Sometimes you can rig things so that it looks like "everyone wins," and sometimes there may even be some substance to that. But not always, and, when it does happen, it's often because some third party has appeared to be targeted, and almost always one or both combatants have to accept some losses (see the relatively recent NYT article on how loggers and environmentalists are now allying with each other against developers in the Northwest; note not only the third party targeted by the former combatants, but also that the loggers are having to accept culling as a replacement for clear-cutting).

Robert Moses is a good example of someone who created forward movement, or at least the impression of it (and, I admit, probably at least some reality), by crushing anyone who got in his way.

A society can only survive it has some sort of community bonds that transcend its divides. But what are those community bonds, beyond the silencing of whatever group has been targeted to lose? At the moment, I feel empty of an answer.

Whenever this sort of question is posed, I always wonder: "Well, what do other countries do?"

Japan, for example, is somewhat famed for the frequency with which they demolish old buildings and replace them with new ones. Part of the explanation for this is government desire to promote a constant supply of construction jobs for economic reasons; another part is differences in building design and materials used (both in terms of historical traditions, and in terms of modern innovations); yet another part is simple geography and environmental factors (earthquakes being a big factor on that list); and still another part is the tumultuous trends of Japanese history since the Meiji era resulting in a lot of upheaval and change.

Of course, there are many people in Japan who lament the loss of old beloved neighborhoods and buildings - it's a somewhat common theme in Japanese media of the past several decades, usually paired with nostalgia for an irrecoverable past. Even with their much stronger sense of civic duty and collective responsibility to society as a whole, there are still plenty of Japanese who deeply resent the loss of the old and familiar, and are equally suspicious of the new and unknown.

Another interesting country to consider is Germany, with its inherited regional architectural differences in the wake of reunification. They are currently in the midst of a construction boom that has been gathering steam steadily for roughly two decades, and which looks to have quite a lot of momentum and inertia built up.

Like us, they complain about long delays involving permits, planning, laws, etc - and yet unlike us, even with all those delays, they are still building at an impressive pace, with little sign of slowing down. In fact, there is a large and growing backlog of buildings that have been approved for construction, but which are lagging behind in progress and completion. This can partly be attributed to the fact that despite individual approval processes taking longer to complete of late, there has been a large surge in total number of constructions being approved overall.

I really think we need to be devoting expertise and resources toward studying what these other countries are doing differently that allows them to get things done, and then work hard to import best practices adapted for our own needs. Because right now, I think the problem is mostly that we've stagnated both culturally and governmentally, and things aren't going to change until one or the other or both of those areas see some dynamism and new ideas develop.