As beavers return across North America, they are becoming pests in much the same way deer have. Some recent examples from Canada:

At first, the theft of wooden fence posts seemed like a crime of opportunity – amid soaring lumber costs, stacks of wood have gone missing from construction sites across North America.

But officers in the Canadian prairie community of Porcupine Plain, Saskatchewan, soon identified the culprit: local beavers had stolen the posts to build their dam.

The semiaquatic rodents were also recently blamed for an internet outage in British Columbia, which left an entire town with access to the web after beavers chewed through a cable. Adding insult to injury, the animals had also pilfered the telecom company’s marking tape to line their dam.

Another beaver recently wandered into a Toronto Metro station, and while beavers aren't very aggressive they will bite if cornered and you don't want to be bitten by an animal that chews down trees.

In many small towns playing fields are placed on stream floodplains, and hundreds of baseball, soccer, and lacrosse fields have been flooded by beaver dams. When I lived in Williamsburg, Virginia one beaver pair built their dam in the culvert under a road, leveraging the road berm to turn a 6-foot-long dam into a 200-foot barrier, creating a huge pond and flooding numerous yards; the beavers then swam up and chewed down people's dogwood and redbud trees. They were trapped and driven fifty miles away, but they were back in a week. (They know a good spot when they see one.) So they were trapped again and flown to West Virginia.

In 1999 another beaver pair tried to set up in Washington, DC's Tidal Basin but after they chewed down one of the city's prize Japanese cherry trees they were also trapped and moved to West Virginia; some people actually protested this move on the grounds that they would be strangers in West Virginia and might get a hostile reception from local beavers. Of course breeding beavers are intensely territorial and are hostile to all other beavers, out of town or local, so this was a moot point, plus West Virginia now has so many beavers that I'm sure they don't want any more flown in.

Just as with deer, the only answer is going to be to kill beavers, and lots of them. Because I work with the National Park Service I know several wildlife biologists who are active in the DC area, and they were outraged that the government spent so much money moving the Tidal Basin beavers when they feel like they can never get enough money for protecting actual endangered species and actual threatened environments. I heard pretty much the same thing from three of them: "Why didn't they just shoot the beavers? Wouldn't those Secret Service guys enjoy the practice?" 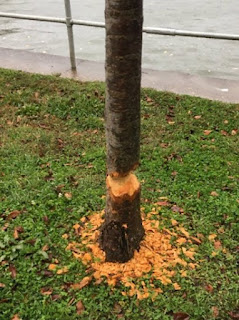 When I went searching for a link to the 1999 Tidal Basin beaver incident I remembered, I discovered that another beaver just did the same thing; behold the damaged cherry tree above.
Posted by John at 9:36 AM

Beavers can cause massive damage over night. Everything is cool when you fall asleep, but you wake up floating down the Mississippi. Add a few brain folds, and they could organize and demand ransoms.

If we're going to allow increased hunting of beaver and deer, it's probably going to have to be presented as clinical, science-based culling by experts who do it as a job. It will have to be rationalized, professionalized, and tame. Any suggestion that the hunting would be fun ("wouldn't the Secret Service enjoy that"), or a way of striking a blow against liberal suburbanite sentimentality (i. e., a way of owning the libs) will make it a non-starter. That's what happens when tough-guyism becomes the core of an ideology (and I think you're right on that).

"Why didn't they just shoot the beavers? Wouldn't those Secret Service guys enjoy the practice."

Nah, they only enjoy shooting minorities, and as you yourself point out, beavers are far from endangered.