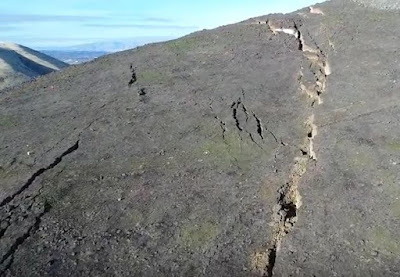 Above the Yakima River near the town of Union Gap, Washington, a crack has appeared in a mountain:


The fissure was first spotted in October on Rattlesnake Ridge in south central Washington State, overlooking Interstate 82 and the Yakima River. Since then, a 20-acre chunk of mountainside — roughly four million cubic yards of rock, enough to fill 25 football stadiums to the top of the bleachers, eight stories up — has been sliding downhill. Geologists can measure its current speed — about two and a half inches a day — but they cannot say for certain when, or if, it might accelerate into a catastrophe. And they are powerless to stop it.

“The mountain is moving, and at some point this slide will happen — it’s just a matter of when,” said Arlene Fisher-Maurer, the city manager in Union Gap, population about 7,000, just north of the ridge.

Geologists think the mass will break free and collapse between late February and early April. Must be pretty creepy to live anywhere nearby.
Posted by John at 8:17 AM

One additional figure: using a quick back of the envelope calculation, the "roughly four million cubic yards of rock" should weigh somewhere around 5.4 million tons, or 10.8 billion pounds.