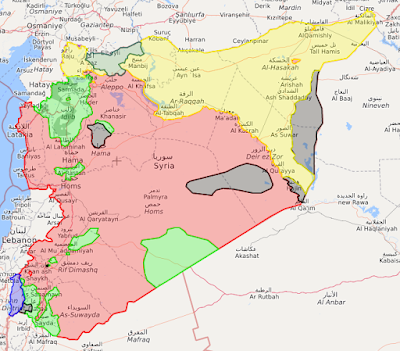 In Syria, our NATO allies the Turks are, with Russian help, attacking our other allies the Syrian Kurds, who did much of the hard fighting against the Islamic State around its old capital. We are paralyzed, caught in a web of our own making: we can't fight the Turks, because they are in NATO and we depend on our Turkish air base to keep our Middle Eastern wars going; we can't fight the Russians because we agreed to their setting in up Syria, and anyway we don't want a war with Russia, and on what basis could we complain about their helping our Turkish allies? We can't abandon the Kurds because they are our only really reliable friends in the whole godforsaken region, plus we would feel like cads for ditching them after working so closely with them for so long, not to mention the whole "losing face", "not following through on our commitments" thing that matters so much to so many American foreign policy types. And, we can't broker a peace deal in Syria because that would mean recognizing the Syrian government, which we have been saying for years is an illegitimate tyranny.

Near as I can tell, our Syrian policy is to keep muddling along until a democratic, human-rights-respecting, pro-America, pro-Israel, anti-Iran, anti-terrorist government miraculously appears in Damascus. Meanwhile, people continue to be blown up on a regular basis, and the whole region from Manchester to Amman is in crisis over what to do about refugees thrown up by this and other wars. There's no use blaming Trump's people for this, because Obama's had no idea what to do, either, and ended up focusing on the Islamic State because that was one problem we felt like we could solve. They seem to be pretty much beaten. But Syria's ordeal seems likely to stretch on for decades.

On the map above, territory controlled by the Syrian government is in red, Kurdish territory in yellow, other rebels in green, and the remnants of the Islamic State in gray.
Posted by John at 8:04 AM

I'm not sure this is a problem of our own making--Syria and the Middle East got this way in large part under their own power. The major aspect of this that is our own making is the belief that we have much influence. We can isolate and militarily destroy a group of freakish genocidaires that everyone hates (ISIS) but there is essentially nothing we can do to get Syrians to live together in peace, to get Kurds and Turks to give up their nationalism, or to make the Russians and Iranians less devoted to proving that they're important.

"We can't abandon the Kurds because they are our only really reliable friends in the whole godforsaken region, plus we would feel like cads for ditching them after working so closely with them for so long, not to mention the whole "losing face", "not following through on our commitments" thing that matters so much to so many American foreign policy types. And, we can't broker a peace deal in Syria because that would mean recognizing the Syrian government, which we have been saying for years is an illegitimate tyranny."

Since when have concerns like these EVER stopped us from doing these things?

We'd feel like cads for ditching them, after working closely with them? Bullshit! We've backstabbed all sorts of people before because it was politically expedient, with not even the pretense of regret. How are the Kurds any different?

We'd lose face? Bullshit! It would be trivial to fabricate a reason for breaking relations! We've been looking the other way over all sorts of Kurdish attrocities, any one of which would be ample grounds for withdrawing support in favor of our other, far more valuable allies in Turkey and Russia.

We'd be abandoning our commitments? Well too bad! We were committed to fighting the Vietnam War despite not having a way to win it, and look where that got us. At some point, you need to recognize that a committment made cannot reasonably be kept without inviting disaster and making things worse than they ever would be in abandoning the lost cause.

We don't want to broker peace by recognizing the Syrian govenment? Well too bad! Sometimes you just have to bite the bullet and accept that you can't fix every aspect of a bad situation! We left Sadam Hussein in power in Iraq for decades because every alternative open to us was much, much, much worse.

We may not want to recognize Assad's regime, but what other choice do we have? Keep praying for a miracle while the Middle East keeping unraveling? Keep investing more and more money, time, resources, and human lives, in a fight that isn't worth fighting? Sometimes you just need to bite the bullet and accept things you don't want, because not doing so would be far worse. Once the region is stable, we can worry about doing something about Assad. But until then, he's the devil you have to deal with if you want any chance of things improving in the region over the next few decades, instead of continuing to worsen.

Sometimes, when you've got a broken bone that isn't setting right, no matter how much you don't want to because it's going to hurt like hell, you still need to rebreak it in order to get it to set properly. And the longer you put off doing it, the worse it will be when you inevitably have to anyway.