In 1585, the "Vatican obelisk" was moved 275 feet (83 m) to the square in front of Saint Peter's Basilica. Architect Domenico Fontana designed a wooden tower that would be constructed around the obelisk, connected to a system of ropes and pulleys. The move, including construction of the tower, took 13 months. Seventy-two horses and more than 900 men worked on the project. 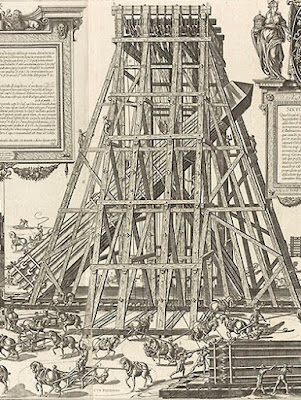 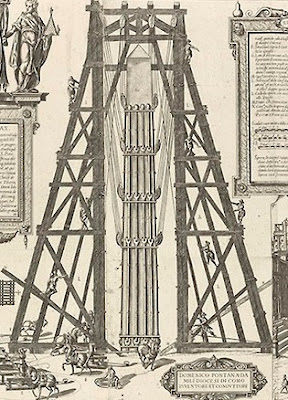 This obelisk was brought to Rome from Egypt in AD 37 by emperor Caligula. It is 85 feet tall (25.5 m) and weighs 330 tons. The Romans stole so many Egyptian obelisks that there are more in Rome (13) than in Egypt. Nobody knows how the ancient Romans or Egyptians moved and erected these huge monuments, but Fontana's drawings show one way it could be done with pre-modern technology. This illustration is from the Getty. 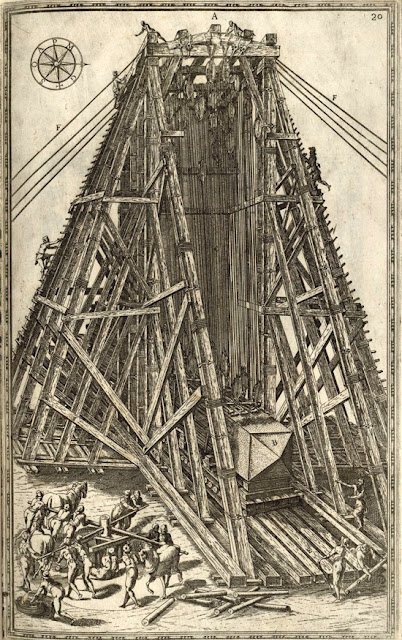 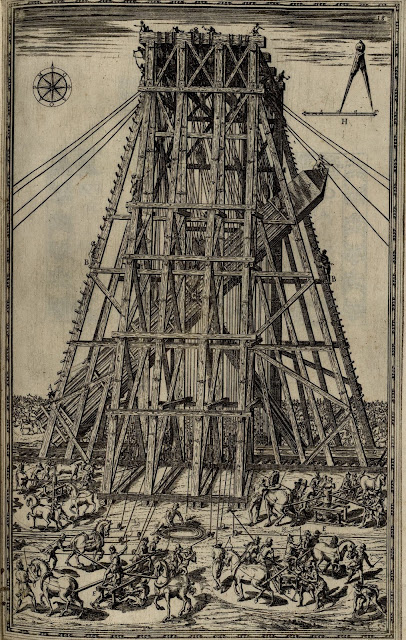 Searching around I found more images from this same document. 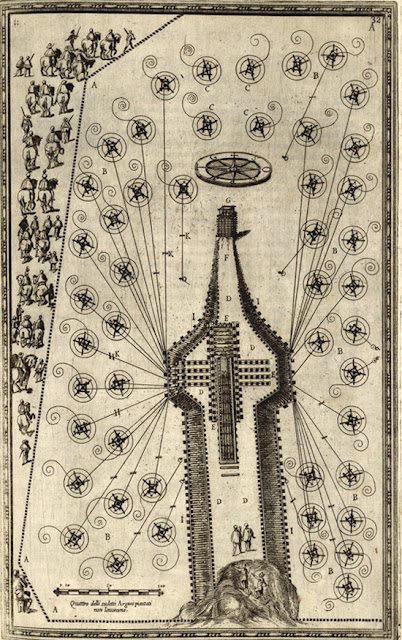 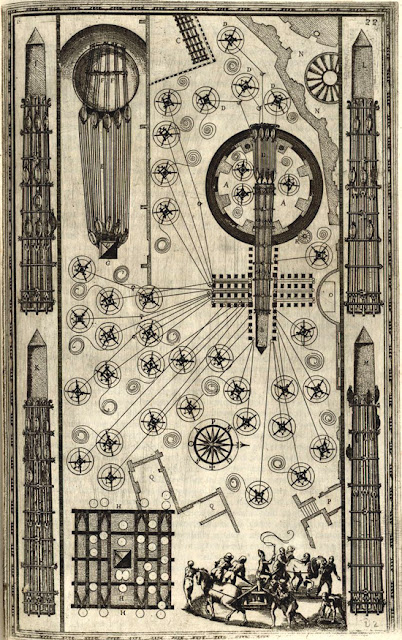 Including these that show how forty capstans placed around the square were used to control the ropes.
Posted by John at 9:37 PM

I find it amusing how one of the most recognizeable Catholic monuments is, in fact, the work of pagans.

Seriously, how does the Vatican manage to reconcile having an obelisk parked out front which was constructed to celebrate some ancient Egyptian god-king? An obelisk that was later taken as plunder by an entirely different group of pagans, the Romans, and which was erected in the Circus of Nero, where it overlooked countless Christian executions? Is that really what you want to keep around as the unifying centerpiece of Saint Peter's Square?

Sure, later on Constantine built Old Saint Peter's Basilica overtop the abandoned ruins of the Circus of Nero. But he didn't move the obelisk - he just built around it. And then a thousand years later, when they were building the new Saint Peter's, they destroyed all the rest of the surviving ruins to do it, but again left the obelisk? And then a century later, they decided to move it a few hundred feet, like an indecisive homeowner deciding they prefer the sofa against the other wall?

The Romans at least were up front about their blatant thefts. It was a sign of their might that they were willing to go to incredible lengths to transport the monuments of their defeated foes back home as war trophies. But what symbolism does this obelisk hold for the Catholic Church? What message does it send to to world, other than "We're perfectly willing to scavenge whatever is left laying around within easy reach, and take pride in and claim ownership over monuments and deeds that are wholly the work of others."

The Catholic Church has always been happy to appropriate paganism for its own purposes: turning temples like the Parthenon and the Pantheon into churches, building churches on sacred groves, letting pagan gods metamorphose into saints, using Platonic philosophy to give the faith some intellectual heft, and so on. So there's nothing unusual about the pope wanting an obelisk.