The Temple that Floated on the Abyss 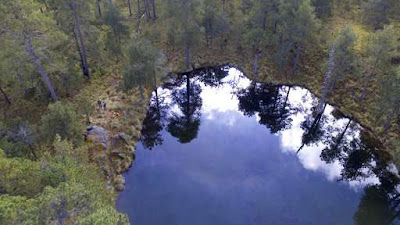 On the slopes of the Iztaccihuatl volcano in Mexico, at an elevation of 13,000 feet, is a pond that sometimes reflects the sky like a mirror. Archaeologists exploring the site discovered that the pond is artificial, created by damming the water coming from a spring. 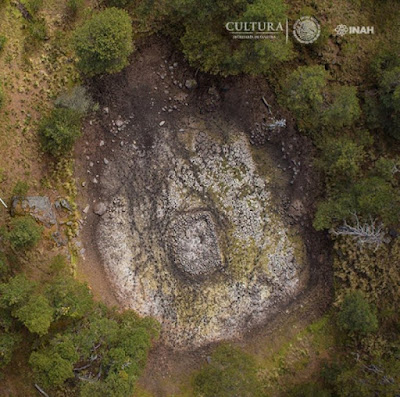 Poking around in the pond they found stone ruins, and they drained the pond so they could investigate closely. They found the ruins of a small temple, placed in the center of the pond. In it and all around the pond were artifacts associated with the rain god Tlaloc. The artifacts date to between 750 and 1150 AD.


The researchers have surmised that the placement of the stones is meant to portray a miniature model of the mythical universe. The placement itself creates the effect of making it seem like the stones are 'floating' on the water's surface rather than lying on the pond bed. . . .

Archaeologist Iris del Rocio Hernandez Bautista, who is from the Subaquatic Archeology Subdirectorate (SAS) of the INAH, pointed out that according to Mesoamerican creation myths, the world was devoid of any land. Cipactli (the monster of the earth) floated on the primitive waters and from his body, the sky and the earth were created.

She believes there was a ritualised control of the water coming from nearby springs to irrigate the pond with the aim of causing a visual effect in which it seemed that the structure and the mounds of stone floated on the water mirror, which in turn reflected the surrounding passage.

This image of the primeval world floating on the abyss of the waters is found across the Americans, deep in the lore of most Indians. We know that ancient Mexicans were very theatrical in their religion and built many of their temples as great stages for elaborate rituals, so this seems like just the sort of thing they would have done.
Posted by John at 8:13 AM