In New Mexico, the Descendants of Indian Slaves 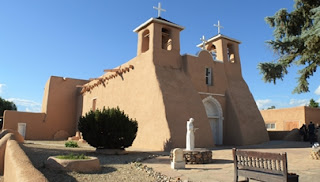 Interesting story by Simon Romero in the Times about American Hispanics who discover slaves among their ancestors:


Lenny Trujillo made a startling discovery when he began researching his descent from one of New Mexico’s pioneering Hispanic families: One of his ancestors was a slave.

“I didn’t know about New Mexico’s slave trade, so I was just stunned,” said Mr. Trujillo, 66, a retired postal worker who lives in Los Angeles. “Then I discovered how slavery was a defining feature of my family’s history.”

Mr. Trujillo is one of many Latinos who are finding ancestral connections to a flourishing slave trade on the blood-soaked frontier now known as the American Southwest. Their captive forebears were Native Americans — slaves frequently known as Genízaros (pronounced heh-NEE-sah-ros) who were sold to Hispanic families when the region was under Spanish control from the 16th to 19th centuries. Many Indian slaves remained in bondage when Mexico and later the United States governed New Mexico.

These slaves were Indians. In the 17th century they were mostly captured and enslaved by the Spanish (and their African companions), but after 1700 most were enslaved by other Indians. The Comanche Empire in particular was a great slave raiding and slave trading state.

These slaves were treated in different ways. Some became household servants or field hands. But quite a few were settled in slave villages on the border of Spanish and Indian land, to serve as a buffer. The name Genízaros is thought to come from the Turkish word Janissary, which referred to slaves used as soldiers. Abiquiú, New Mexico is one of several towns that began as a community of Genízaros.

Because of the ethnic mixing that took place in Mexico, most Mexicans and American Hispanics have both Indians and Europeans among their ancestors. (One genealogist quoted in the story says his clients are typically 30 to 40 percent Indian.) Which means, given the extent of the Indian slave trade, that many Hispanics (and Mexicans) have both slaves and slave owners among their forebears.

And the detail that really brings the story up to date is that many of these people are now choosing to identify with the oppressed among their ancestors rather than the oppressors:


A growing number of Latinos who have made such discoveries are embracing their indigenous backgrounds, challenging a long tradition in New Mexico in which families prize Spanish ancestry. Some are starting to identify as Genízaros. . . .

Pointing to their history, some descendants of Genízaros are coming together to argue that they deserve the same recognition as Native tribes in the United States. One such group in Colorado, the 200-member Genízaro Affiliated Nations, organizes annual dances to commemorate their heritage.

“It’s not about blood quantum or DNA testing for us, since those things can be inaccurate measuring sticks,” said David Atekpatzin Young, 62, the organization’s tribal chairman, who traces his ancestry to Apache and Pueblo peoples. “We know who we are, and what we want is sovereignty and our land back.”

Of course just having Indian ancestors doesn't make you an Indian under US law; you have to belong to an organized community with traditions tracing back to pre-conquest times for that. But that won't keep people from trying to claim that identity.
Posted by John at 7:44 PM

Odds are pretty good that if you're of Iberian descent, you've got slavery in your ancestry anyway, just further back.

The Romans of course had a thriving slave trade in Iberia, but so did the Visigoths who originated the various Christian kindgoms and cultures that would eventually become modern day Spain and Portugal. When the Muslims arrived, they too kept slaves, and when the Christians later became ascendant once more, they still kept slaves. In fact, they routinely bought slaves from their Muslim neighbors in North Africa, and for a long time those slaves were overwhelmingly Christians captured by the Muslims in Eastern Europe.

It was only pressure from the Church that began slowly convincing Christians not to own other Christians as slaves, and so they started to substitute Muslims as slaves instead, typically brokered through merchant nations like Genoa. But in time, supply of Muslim slaves dropped off, and the trade began to shift toward African sources, specifically sub-saharan peoples, of both Muslim and Fetishist faiths.

And of course, none of this is remotely unique to Iberia. Most European cultures extant today can be connected to some form of enslavement within the past 1000 years. We're all descended from slaves - the only difference is how many centuries ago it was.