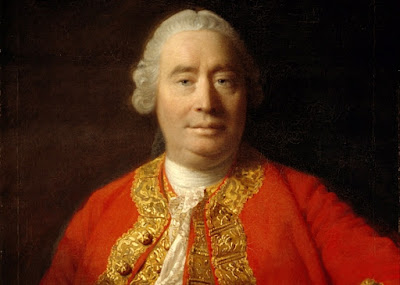 In 1776, many people in England and Scotland were more riveted by the slow death of philosopher David Hume than by events in America. Hume was Britain's most famous skeptic, known for demolishing proofs of the existence of God and trying to reconstruct ethics on a completely non-religious basis. His most famous line may be his observation about miracles:


No testimony is sufficient to establish a miracle, unless the testimony be of such a kind, that its falsehood would be more miraculous than the fact which it endeavors to establish.

As Hume slowly expired from what was probably colon cancer, people wondered, how would he die? Would he, at the end, turn to the consolation of faith? Would he, a famously cheerful man, fall into despair?

It was left to Hume's good friend Adam Smith to disappoint the faithful. In a letter to Hume's publisher, David Strahan, Smith recounted Hume's end as a model of the philospher's death: calm, happy, free from illusions or regrets:


His cheerfulness never abated, and he continued to divert himself, as usual, with correcting his own works for a new edition, with reading books of amusement, with the conversation of his friends; and, sometimes in the evening, with a party at his favorite game of whist. His cheerfulness was so great, and his conversation and amusements run so much in their usual strain, that, notwithstanding all bad symptoms, many people could not believe he was dying.

At the time it was the most famous thing Smith had written, much more talked about and more bitterly attacked than The Wealth of Nations. It was both a testimony to Hume and a ringing paean to friendship. These men had shared much of their lives, and had bounced their ideas off each other for decades. Almost every word of Smith's work can be seen as a response of sorts to Hume's – Hume was 12 years older – and Hume in later years revised his philosophical works to reflect years of conversation and debate with Smith and his other Scottish friends. 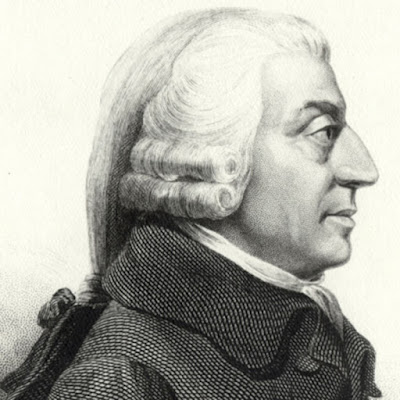 Something very odd had happened in Scotland. From a place known in the 17th century for religious fanaticism, clan warfare, witch burning, haggis, and plaid, Scotland had become in a quarter century the second center (after Paris) of the European Enlightenment. Besides Hume, probably the most famous philosopher to write in English and the century's greatest skeptic, and Smith, the first economist to give a coherent description of capitalism, Scotland produced a dozen other famous figures of science and letters: James Watt, inventor of the first efficient steam engines; mathematician John Playfair; pioneering chemist Joseph Black; James Hutton, one of the creators of scientific geology; and more.

As to why, nobody really knows. The Union of Scotland with England in 1707 must have been part of it, creating stronger ties between the commercial and political classes of Scotland and England and leading many more Scots to travel to the south. Hugh Trevor-Roper speculated that the saga of the last Stuarts also contributed, since many Scots traveled to visit Bonnie Prince Charlie and his father in France or Rome, exposing themselves to European culture and the international politics of the age. The simple flagging of religious extremism and conflict, which happened across much of the continent at around the same time, is also part of the story. But however it happened it is another example of how fast human societies can change. It is possible to find antecedents for this great cohort in earlier times, going back to the 1680s, but really the Scottish thinkers emerged from next to nothing in a single generation, astonishing the rest of Europe.

Because Scotland was such a small place, all of its enlightened luminaries knew one another. They belonged to the same clubs, frequented the same inns, and attended the same dinner parties. In particular they all attended the dinner parties of David Hume. Hume was not the lonely sort of philosopher, but a great talker and bon vivant. He delighted even Christian divines predisposed to hate him with his charm, his ability to converse on any intellectual topic, his cellar of expensive wines, and his skill as a chef. It may help Americans to understand this circle to note that when he was in Britain Ben Franklin became their great friend, and enjoyed their company so much that he considered settling in Edinburgh. Like Franklin these were worldly men as interested in politics and popular culture as in abstruse philosophy or cutting-edge science; like Franklin, most of them ended up wealthy, thanks to their cleverness and skill in cultivating wealthy patrons. They were radical in their thinking but decidedly moderate in their behavior and their politics. Just as Franklin spent more than a decade working to preserve the peace between Britain and the North American colonies, Hume worked assiduously to keep the peace in Scotland: between Whigs and Tories, between Scots and English, between all the factions of a factious intellectual age.

I've been thinking about these men because I just finished reading The Infidel and the Professor by Dennis Rasmussen. This was the number one item on my Christmas list but I'm sad to report that it is not a particularly good book, obviously by a philosopher rather than a biographer. I was hoping for something like Jenny Uglow's The Lunar Men, a wonderful book about another circle of 18th-century intellectuals. But Rasmussen can't evoke the spirit of a time and a place like Uglow can, can't bring people to life or re-imagine their conversations, so the result is rather pale. It does have the virtue, though, of focusing on friendship. Philosophers, after all, do not live or work alone. They have friends, and belong to societies. Their relationships shape their thinking. A case can be made that his friendship with David Hume was the single most important factor shaping Adam Smith's thought. And this is as it should be, for in human life there is nothing finer than friendship, nothing more important than our connections to each other.
Posted by John at 8:19 PM