The Arrival of Indo-Europeans in Southern Iberia 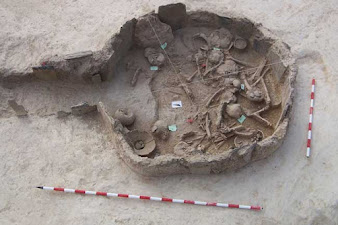 I recently threw myself back into reading about the very impressive Copper Age culture of southern Portugal and southern Spain, dating to between 3000 and 2500 BC. This required me to sort out the complications of the tombs at Valencina de la Concepción, because so much online writing about the site is garbled. Above is the Tomb of the Crystal Prince, otherwise "Structure 10.042-10.049 of the PP-4 Valerio Sector." 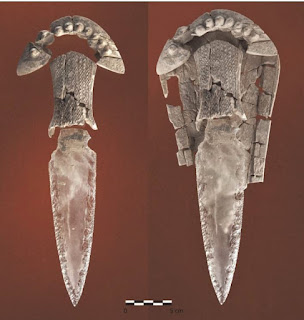 Crystal dagger from the tomb above. 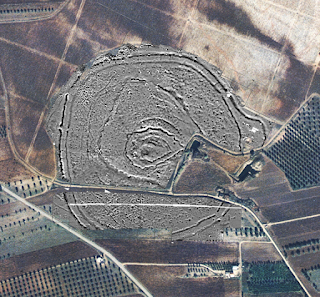 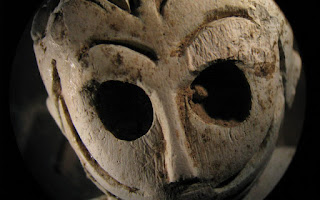 Another great site is at Perdigões in Portugal, a complex of circular earthworks, burials, and buildings.
Anyway I undertook this exercise because of more news from paleogenetics concerning the population history of this region. What the new studies show is that the people of this Copper Age culture were all natives of Neolithic Europe, their genes mostly those of farmers who migrated from Anatolia, who interbred with the Mesolithic inhabitants of the regions where they settled. El Almoyola, a famous Site of the El Argar culture
As I said, the culture of the Iberian Copper Age throve down to around 2500 BC. Then it started to fall apart; many sites were abandoned, others shrank, and the distinctive cultural expressions fade out. When we again see impressive monuments in this region, after 2200 BC, they are part of quite different cultures of the Bronze Age; for example we see many more fortified towns full of buildings with stone foundations. In Southeastern Spain the early Bronze Age culture is called El Argar. The genetics of these people are quite different. They show considerable steppes ancestry, the genetic signature of the Indo-European invaders. As usual, the change is even more profound on the male side; the available male skeletons are 100% Indo-European in the Y-chromosome line. These skeletons are mostly or entirely from the elite. So we see that the elite men of Bronze Age Spain were entirely descended from invaders in the male line. The men were often buried with swords, so these were the sword-wielding aristocrats who would dominate Europe for the next 4,000 years. 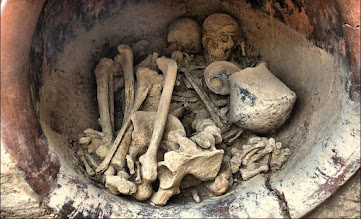 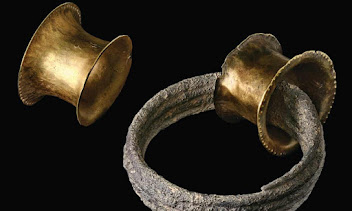 Rich burial from El Almoyola, and gold ear spools found in it
An interesting detail is that the paleogenetics also turned up signs of people from the eastern Mediterranean, a thousand years before the first known Phoenician settlements in the region. Trade goods from Italy and perhaps Syria have also been identified. The Mediterranean was to some extent a connected world even before the first real sailing ships.
Posted by John at 11:48 AM

In your reading, what if anything have you found out about the Tartessians? Of course they're from a later age, but from the same region. I sense a wonderful lost-world romanticism around them, especially with the possibility, suggested by Mallory, that their language was an isolate. That's probably a receding possibility if the Indo-Europeans had ruled in the region since the Bronze Age, as you're saying. Alassss...

I think it is generally accepted that the Tartessian language was non-Indo-European. You might find it interesting that while the Basque language also survives, Basque people are genetically identical to their non-Basque-speaking neighbors, with about the same admixture of genes from the steppes.

And what is the rest, precisely? The same mix of Anatolian neolithics and mesolithic natives (whatever we want "native" to mean)?

Actually, if the Iberian languages are also accepted as non-Indo-European, then that might indicate the Peninsula was one place the steppe men with swords got linguistically swamped. All those wetnurses . . .

My impression is that pre-Roman Iberia had a mix of Indo-European and non-Indo-European languages. As did Italy, with Etruscan and so on. (The Etruscans of the classical period also had the same amount of steppes genes as the Latins.) I haven't read any speculation as to why the situation was so different north of the Alps and Pyrenees; off the top of my head I can't think of any documented non-IE languages north of Basque and Etruscan. A crude model would just be that the wave of invasion weakened as it went on, but that can't be right, because Britain and Ireland were very thoroughly colonized, something like 85% population replacement. I suppose there was just some degree of randomness, either related to military/political events or the effects of the plague the invaders probably brought with them.