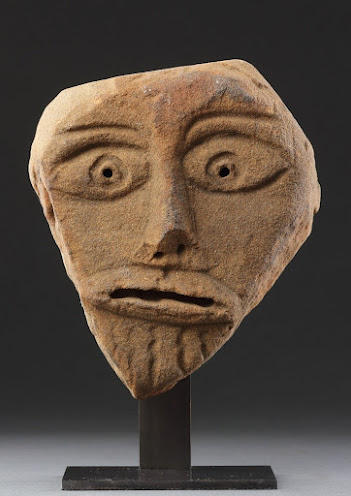 Romano-Celtic Sandstone Head, 17 cm tall (6.5 inches). Or so Finch & Co. claimed a few years ago when they sold this, but they seem to be reputable as antiquities dealers go.

The fascinating complications of the placebo response. Among other things, it seems to be getting more powerful in US drug trials.

It's not just you getting older; is really is getting harder to understand the dialog in movies. There are a lot of reasons for this, some of them related to money, others to streaming platforms. But I have personally noticed a major shift in acting, from theatrical, look-at-the-audience-and-enunciate speech to looking away and muttering, and I am glad to see that Hollywood insiders agree: "in the old days, you could count on an actor's theatricality to deliver a line to the back seats. But acting styles have changed so dramatically over the years that it has become much more difficult to capture great sound on the set."

Commonwealth Fusion Systems is a company founded by MIT physicists and funded by people like Bill Gates and George Soros. They say that new superconducting magnet technology will allow them to make a commercial fusion reactor by 2030. Not holding my breath.

Kevin Drum says the debate about Critical Race Theory, the 1619 Project, etc. is really about patriotism: do you love America despite its flaws, or hate it because of them?

In New York, and many other places, any complaint you make against a prosecutor disappears under a veil of judicial secrecy, and outsiders never find out what happens to most of them. But we know it isn't much, since prosecutors are hardly ever fired for misconduct. The rule that people will behave horribly when they can keep it secret applies here as everywhere. (NY Times)

These demographers predict that the world's total fertility will fall below replacement rate by 2040. I might live to see one of the most profound changes in human history, our escape from the iron scissors of Malthus.

What do all the horned helmets from the European Bronze Age mean? Interesting 25-minute video. The much simplified answer is they started out as a sign of divinity, then of semi-divine heroes, then were adopted by some human warriors.

How one reporter's tweetstorm got the port of Long Beach to change its rules and allow stacking of containers more than two high, helping to unsnarl traffic at the port.

Two-minute clip from the new Beatles documentary shows Paul composing a new song while he waits for John to show up for a recording session.

The Hubble Space Telescope, offline for a month over the summer because of computer problems, failed again on October 25, but it is now back online for "full science operations." It is 31 years old, a long time for such a complex satellite to function, so I think it can't last much longer. Fortunately its replacement is due to launch before the end of the month.

One-minute video of a giant phantom jelly (Stygiomedusa gigantea) recorded 3000 feet down off the coast of California. And the weirdness of the barreleye fish.

Soda shops, where you can order custom mixes of name-brand sodas adulterated with all manner of fruit juices and flavors, have been big in heavily Mormon areas for years and are now expanding across the country. "Happiness in a cup" for people who don't drink coffee. (NY Times)

Volunteer at a Massachusetts center for "farm based therapy" dies of cardiac arrest after being repeatedly rammed by a sheep.

At the Met, an amazing zoomable image of a 17th-century tapestry depicting the labors of the months. A nice reminder that while the world was beginning to change rapidly in that era, much of the civilization remained medieval.

David Brooks on contemporary conservatism: "The rich philosophical perspective that dazzled me then has been reduced to Fox News and voter suppression." (The Atlantic)

"The rule that people will behave horribly when they can keep it secret applies here as everywhere."

Do we think that's really, really true? "Everywhere," as you say? I wonder.

Clearly it's true of some people. But all? I don't know.

I'm not trying to salvage some idea about human goodness. I just think that, objectively speaking, many people don't have a lot of horribleness just itching to come out if only they could keep it secret.

I suppose it depends on how you define horribleness. Is it horrible, to walk around thinking badly and scorning many of our fellow humans, but to keep it an inner secret? If that's what one means by horrible, or more exactly, if one considers it horrible enough to quality, then you're probably right.

But is the standard of horrible, say, murder? I don't think a lot of people walk around wishing they could kill either a particular person or just someone, perhaps just to see what it's like. Could most people be made violent by sufficient provocation? Yes. But that's absolutely not the same thing.

"I suppose it depends on how you define horribleness. Is it horrible, to walk around thinking badly and scorning many of our fellow humans, but to keep it an inner secret?"

Thinking further, while I think most people probably *sometimes* have feelings like these, to walk around feeling a lot of scorn for others as a major theme of one's inner life may be more rare. That sounds more like what a kind of malignant narcissism, and I don't think the majority of humans qualify for that.

These demographers predict that the world's total fertility will fall below replacement rate by 2040. I might live to see one of the most profound changes in human history, our escape from the iron scissors of Malthus.

This is great news for the planet, although it likely comes too late.

We could certainly stand to go from our nearly 8 billion people down to something more reasonable like 4 billion. It would be a boon for the environment, but it would also be a boon for us as well - dividing the finite resources of the planet between half as many people means the average person is theoretically twice as resource rich. (Minus inefficiencies, logistical issues, etc.)

From a logical standpoint, we should actively want to have as few people as possible on the planet without dipping below certain thresholds of security against calamity.

Haven't read the article, but has enunciation ever been highly prized in the U.S.? I doubt it. That might have something to do with the U.S. being an immigrant country.

And why should a movie actor bother throwing his or her voice to the back row? When I have trouble understanding what the actors are saying in a movie I blame the audio department. If the actor and director decide muttering is required, then there should be muttering, and it's the audio department's job to capture it.

@David- I obviously don't think that all people turn evil when the lights are off. But it is hard to think of examples of groups of people who have power and can keep what they do secret but don't eventually do awful things.

I think the best way to fight systemic evil is openness. And in the case I cited, I think investigations into prosecutorial misconduct should absolutely be in the public record.

I've now read the Kevin Drum essay. In terms of what the debate about CRT, 1619, and so on, is about, I think he's only partly right. FWIW, I think this debate is an instance of the much larger, virtually universal human problem of different groups living together. This problem is particularly difficult when the groups involved have a freighted, violent history between them, and when they try to go from a situation when one group was clearly dominant to one where all are supposed to be equal. The patriotism thing is there for Americans because our country has a long tradition of patriotism. But the problem exists also in societies where there was little tradition of "patriotism" as we understand it (say, the Ottoman Empire before about 1850).