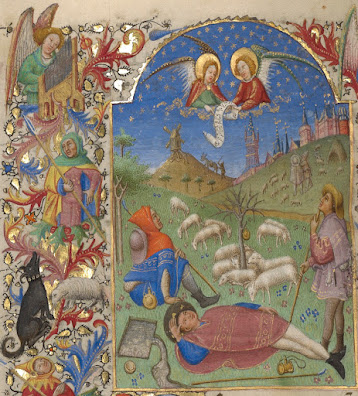 The Annunciation to the Shepherds from a French manuscript of c. 1420

Mentalfloss page linking to 12 great museums you can tour online.

The water crisis in Iran. Population growth, industrialization and oil extraction have stretched the country's water sources to the limit, adding another serious problem for a country that already has too many.

More on the Galloway Hoard, including a remarkable little gold and rock crustal jar.

The pandemic has accelerated a trend that has been under way for decades, the shift of children from physical sports to e-sports. You may not know that there are local leagues for e-sports with the same sort of coaching by dads infrastructure that has long supported football, baseball, soccer, and so on. (NY Times)

The savage war waged by monkeys against the dogs of an Indian village.

In Colchis at the east end of the Black Sea, gold vessels and ornaments were very much in fashion from 2500 to 1500 BC, and then again after 800 BC, but so far as archaeologists can tell very much out of fashion between 1500 and 800 BC; the society looks as rich as it had been except for very little gold.

An anonymous donor sent a box containing $180,000 in cash to the physics department at CCNY, asking that it be used to help impoverished physics students. (NY Times)

Searching for 520-million-year reefs, built by archaeocyaths, in the Nevada desert.

In its early decades the SPCA worried a lot about the conditions of urban working horses, pulling carts on pavements all day, confined to tiny stables at night. So they held Christmas parties for them, partly to give the horses treats and partly to raise awareness about the bad conditions some faced.

A 2019 document from Uber reported 6,000 cases of sexual assault by its drivers in 2017-2018. Perhaps they are applying a very broad definition of "assault," but this is from a company with a record of minimizing its problems, so it looks bad to me. (NY Times)

US population projected to have grown only 0.1% in 2021, the slowest growth since the nation was founded. Births are down, deaths are up, and immigration is down a lot.

Just when it looked like Ethiopia's government might be defeated and overthrown by Tigrayan rebels, a fleet of drones supplied by Arab states turned the tide and send the rebels fleeing back toward their bases. (NY Times; al Jazeera)

"You're about to become a permanent addition to this archaeological find. Who knows? In a thousand years, even you may be worth something!"

~Belloq, Raiders of The Lost Ark