The Uncountable Towers of Medieval Bologna 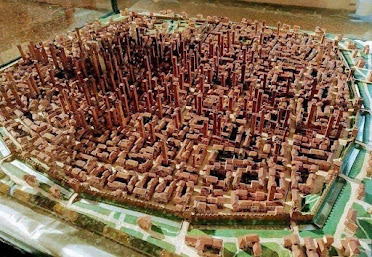 Some web site or other offered me a teaser link to an article on the "The 180 Towers of Medieval Bologna". The picture wasn't this one, which I got from wikipedia, but it looked much like it. 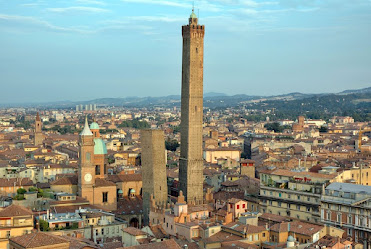 My reaction was disbelief. I mean, there were certainly towers in medieval Bologna, because some of them survive. Dante mentioned one of them in Canto XXXI of the Inferno. They were built by noble families in the twelfth and thirteenth centuries, a period of near constant struggle between the Guelph and Ghibelline factions. The tallest one still standing is 200 feet (61m) high. 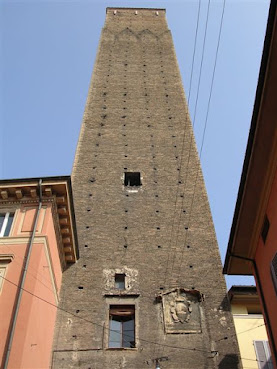 What they were for is an interesting question. People like to say that they were "defensive," but against what is a tower like this a defense? They have very few windows for archers, and the top is too high for the effective dropping of boiling oil. I suspect there was a strong element of prestige in having a tower taller than your neighbors'. The whole thing seems like a gigantic waste to me, but perhaps no more of a waste than staging festivals or wearing sumptuous clothes or some other aristocratic habit. Plenty of work for stone masons. 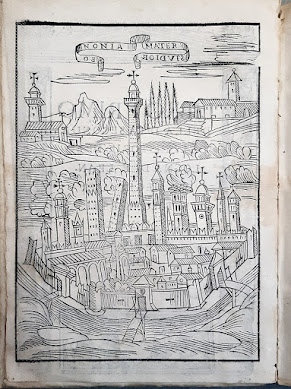 But how many towers were there? The number of 180 comes from a certain Count Giovanni Gozzadini (1810-1887), a senator of the Italian kingdom and fervent Bolognese patriot. He worked from city records, because building a tower required a permit from the commune. But, this assumes that all those that were licensed were built, which is dubious; wikipedia says that more recent scholars favor a total of 80 to 100. Reconstructions like the one at the top also assume that they all stood at the same time. But they were built over a period of around 200 years, and chronicles tell us that some of them fell down before they were even finished. The number that were standing at any given moment would have been less and possibly much less. I think the above image of the town in 1590 might give a better idea of what the medieval town looked like.

Still, how weird that the politics of one Italian commune gave rise to the construction of dozens of tall stone towers, making Bologna the first skyscraper city.
Posted by John at 7:04 AM