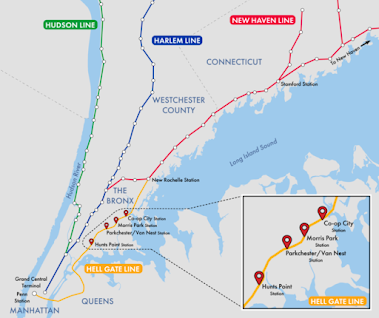 With money from Biden's infrastructure bill apparently on the way, New York officials have just struck a deal to spend a big part of theirs on two long-mooted projects: a new terminal at Kennedy Airport, and something called Penn Access. (NY Times; Penn Access web site)

Penn Access is an old and simple idea: instead of sending all the commuter trains from Metro North to Grand Central Station, creating a miserable crush of commuters at rush hour and requiring many of them to make annoying multiple transfers to get to some parts of the city, why not send some of them along Amtrak's Hell Gate track to Penn Station? After all the necessary track already exists, carrying trains every day, and the two lines cross each other. This would also allow you to add some new stations in the East Bronx, for example at Co-op City, making the commute to Manhattan much simpler for those folks. So surely it would just be a matter of creating a sort of ramp so commuter trains could switch to the Amtrak track? Maybe a few new signals? Wouldn't this be pretty cheap?

Ha ha, right. Amtrak, because of its governing laws, can't refuse to carry commuter trains on its tracks. But it can give its own trains priority, and it can limit traffic to what it thinks its lines can safely carry. And Amtrak has long maintained that the Hell Gate tracks are so old, the bridges so stressed, and (especially) the two tunnels under the East River so decayed, that no more traffic could be carried without major upgrades. New stations would also require the laying of new track, so that express trains would not have to wait behind stopped commuter trains.

So there things have sat for about the past thirty years. But the new deal provides $2.87 billion to make Penn Access a reality, plus an additional $1.3 billion to repair the East River tunnels. They plan to get to work right away, since the Environmental Impact Statement already exists and the initial start-up costs can be paid out of state and MTA funds without waiting for final passage in Washington.

One of the things I have learned from playing my own small part in infrastructure projects is that all the ones that really end up being built have been around in some form for decades, and in some cases have been planned in detail since before many of the workers who will build them were even born.

What New York City needs is more land. I know, let's move it. Trying to get people in and out of the city is like trying to force an ocean through a funnel. There are so many tunnels under Manhattan that I'm waiting for the whole thing to implode and sink. Burp!