When I was sitting ten feet away from some friends last week, outside, next to a kerosene heater, I offered this proposition for debate: American democracy died when we let the factories close. I see that the same question has been on the mind of Russell Brand, as he tries to explain the Brexit vote:

While, on its face, the Brexit referendum offered voters a simple binary choice of either leaving or remaining within the European Union, in reality it came to be seen as something much more: an opportunity to either vote for the establishment or give it two fingers.

This rather unsophisticated reading of the troubling referendum was made easier by the prior dismantling of real political representation for ordinary British people, notably through the repositioning of the Labour Party in the 1990s as a kind of neoliberal, establishment-lite party under Tony Blair. During this time the purpose of the British left migrated from the pursuit of economic equality for the working class to a kind of performative, hollow optimism that masked an ideological capitulation to economic conservatism.

My belief is that, in the wake of this betrayal, a nostalgic yearning for fairness among working people led to a resurgent nationalism — and ultimately support for Brexit. The parties founded to represent working people were inviting them to discard the flags and icons of Britishness that had been historically mobilized (however cynically) to inspire their sacrifice, which is in part why the Remain campaign failed. Labour’s focus on cultural rather than economic equality meant there was nowhere for the working class to go but into the arms of the Brexiteers.

As a product of blue-collar Britain myself, I don’t believe these people are bigoted or backward, as they’re commonly rendered by the institutions that demonize them. I feel they just know that they’ve been stabbed in the back.

I am personally not sure that "stabbed in the back by the establishment" is a fair description of what happened to factory workers in the US and Europe, but I do believe that it is how many people see the economic changes of the past 30 years. It is also important to note that the Brexit vote was very close and that people of every socio-economic and ethnic group voted on both sides. (As in the two elections involving Donald Trump.) It is, therefore, not quite right to say that "the British working class" voted against the EU. 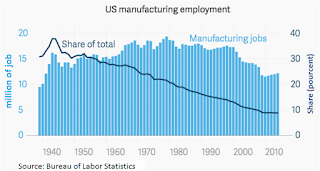 But I do believe that the collapse of well-paid work that men could get with limited education underlies every bad thing happening in the politics of the US, the UK, France, and probably many other places. You can see from wikipedia's graph of manufacturing employment in the US that while the decline in manufacturing jobs as a percentage of the total has been steady since WW II, the first sustained decline in real terms happened in the early 2000s, coinciding with NAFTA and the entry of China in the WTO. This got worse in the Great Recession; from 2000 to 2010, 6 million American factory workers lost their jobs.

I think this is a crisis, and anyone who thought it could happen without seriously roiling the nation was a fool. There remains, however, the question of what could be done about it. Trump's flailing has shown that caring about the problem is not the same as being able to solve it, and the current British government hasn't done anything about manufacturing at all. I wrote before about the dire things that happened when Chicago's steel mills closed in the 1970s, but those mills really were dinosaurs, incapable of achieving the efficiency needed to remain viable with any amount of investment. They were also environmental disasters. In Germany the decline would have been managed, and the government and the unions would have made great efforts to move the steel workers into other, similar jobs, but those mills were going to close, period.

Any serious attempt to bring back manufacturing would have to involve steep tariffs on imports, carefully thought out and imposed in a very broad-based way. That would be a big lift in either the US or the UK, and I am not at all sure the votes could ever be found to achieve it. After all manufacturing workers are a small minority of the population, and tariffs would mean higher prices for everyone else.

And manufacturing, of course, is just the beginning; self-driving trucks are on the horizon, and who knows what other innovations that will wipe out even more traditionally masculine jobs. So the crisis will continue, and our politics will never settle down.

While caring about this problem is certainly not the same as being able to solve it, Trump is a good example of the fact that, in order to solve it, leaders need to *actually* care about it, as opposed to pretending to care about it.

How so? Trump doesn't care about anything other than Trump.

That was exactly my point. Trump doesn't actually care about the problem of lost manufacturing jobs, he just pretends to. I was responding to John's line, "Trump's flailing has shown that caring about the problem is not the same as being able to solve it."