In Chicago, Steel Mills to Parks 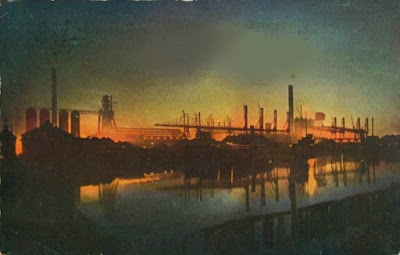 The steel mills and other heavy industry that once dominated the waterfront of South Chicago have mostly shut down, taking 100,000 jobs with them. No more fires lighting up the night, no more dense smoke darkening the day. The action in Chicago has moved downtown, where a billion dollars worth of new office towers are rising to accommodate all the new workers at corporate headquarters and the like. 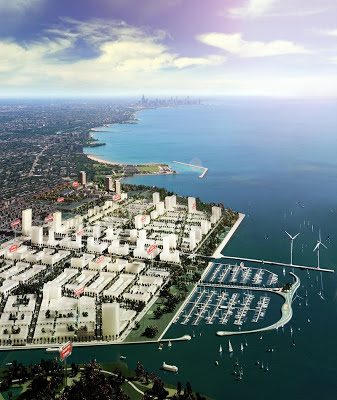 So what is to become of a vast industrial district without much industry? Some places may be redeveloped as residential or office neighborhoods, like the old South Works I wrote about in 2010. 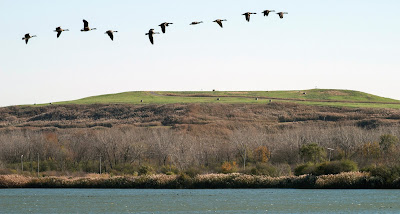 Other old industrial zones are becoming parks. I spent some time today reading about the growing network of parks, wetlands, wildlife preserves, and so on in the old industrial district. Some of them seem like not much of anything, just a few acres of marsh and scrubby woods at the end of a broken road that probably once carried workers to some vanished factory. Other places are more developed, or more beautiful. All are full of life. (Consider how this old landfill has become part of the semi-natural landscape.)

This is Lake Calumet, a highly unnatural body of water, massively modified in the early 20th century to make a port for ships coming up the Calumet River from Lake Michigan. Now, some of it is being turned back into marsh. 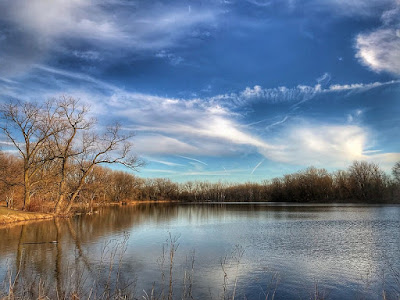 This is Flatfoot Lake, another part of the Calumet River system. It looks idyllic but I-94 is right behind those trees. 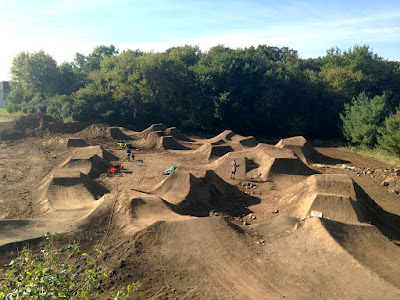 Nearby Big Marsh has become a 278-acre park for mountain bikers and bmx stunt riders. Those ramps are built on top of a layer of old steel mill slag too massive for anyone to even think about moving it. 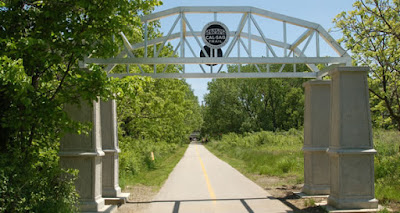 The first section of the 26-mile  Cal-Sag Trail, connecting the Lake Calumet region with Saganashkee Slough, has just opened. 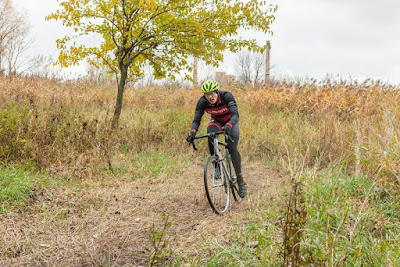 In one sense this is cool; how great that old industrial tracts can revert to natural-looking woods and wetlands in just a few decades. And this is great for Chicago's economy right now, since what the city needs is more amenities appealing to the young office and tech workers they want to attract. 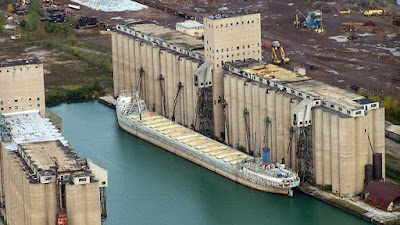 But consider the losses: more than 100,000 manufacturing jobs gone, whole communities of blue-collar workers devastated. Anthropologist Christine Walley grew up in one of those families, and her life was upended in 1980 when Wisconsin Steel shut down and her father lost his job. Now she has written a book about the experience, and what happened to her whole neighborhood:


Of the 3,400 local men and women who once worked for Wisconsin Steel, about one-quarter were dead just eight years later. Many succumbed to alcoholism, drug addiction, and suicide.

Factory work was hard and dangerous but men were proud to do it. Their work was real, and it mattered. Most of those laid off from the mills never found any other work that meant as much, except for a few who became interpreters at historical museums. Those men love telling the story of what it was like when they made everything. 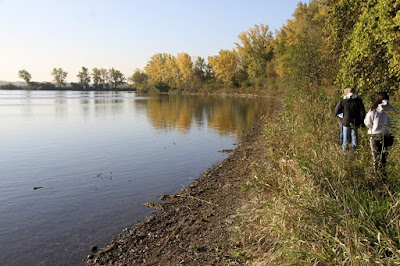 Here's a simple political quiz that I think means a lot: if you tell me whether you would rather have working steel mills in your city, or parks and wetlands, I'll tell you how you voted in 2016.
Posted by John at 9:15 PM

You can vote for functionally impossible things all you want, but they're still not going to be possible.

"if you tell me whether you would rather have working steel mills in your city, or parks and wetlands, I'll tell you how you voted in 2016."

Verloren, being an ignoramus on every issue, is, naturally, unaware that the vast majority of steel in the U.S. is produced in the U.S.

Ahh... personally insulting as usual, and dead wrong as usual.

We import quite a lot of steel. In fact, we're the world's largest steel importer.

That gives us an import penetration of 32.6%, which is staggering. That means an entire third of the steel market is comprised of foreign steel. It's no wonder mills keep closing and aren't being replaced by new ones.

We do produce the simple majority of our own steel (>50%), but we absolutely do not produce the vast majority of it (>~90%), nor even merely the overwhelming majority (>~75%). And for a country of our size, standing, and economy, that's bad.

They produce more steel than they need, and they sell the excess, and only import specialty products that they don't make themselves. In contrast, we produce far less than we need, and we buy the rest from others.

But you know what? Even if we produced more steel, we still wouldn't be able to bring back most of the steel jobs that have been lost. Why? Because technology has advanced, and those jobs are now obsolete.

Steel, yes, has become much more automated, so modern plants use few workers. Same for simple processes like making concrete pipe. But other kinds of manufacturing -- cars, appliances, machine tools, ships, and so on -- are still comparatively labor intensive, and they are also declining in America. Fundamentally this is because the elite in Korea and Germany really cares about those jobs and those industries and has worked hard to keep them viable. In Germany it is hard to close a plant, and the process has to be negotiated among owners, unions, and the government, with severance pay or relocation benefits instead of just a locked door. In the US and Britain the elite would rather have tax cuts and less regulation, and the voters would rather have low prices, so we have let those industries wither away. Technological change has led to the collapse of industry and the devastation of whole communities all around the world, it's just that in the US and Britain we have been particularly cruel about it.

Now maybe the flip side of that is the exciting parts of the US economy, in entertainment and tech and services; maybe we excel at those things partly because of the same attitude that leads us to tell steel mill workers to compete or die. Maybe a company like Tesla or Uber could not be created in Germany or Japan. But we could have done a lot more to ease the transition to modern steel, and we could be doing a lot more to help other industries. As Trump has discovered, the president can't do it by himself, and probably the whole government couldn't; it would require a re-orientation of our whole economy and society away from freedom and profit and toward security. Most of the US elite finds the notion laughable. And that is what pro-Trump workers are complaining about. Trump is a weird messenger because his business career epitomized the attitude toward workers and communities that I am writing about, but I get the message. To many working Americans factory jobs are the single most valuable commodity in our country, and our elites in business and government have treated those jobs like trash.

You mention cars, appliances, machine tools, ships, et cetera. And you mention America's preference for tax cuts and reduced regulation. But what you don't mention is the quality of goods, and consumer tastes.

America used to make lots of cars. But the major American car companies got lazy and complacent. Then foreign car manufacturers started offering better quality cars at cheaper prices. And still American companies did nothing until it was far too late to change things, and they've been trying and failing to play catch up ever since.

No one took Japanese or the Koreans seriously at first, thinking that American consumers wouldn't want smaller or more affordable cars. And at the same time, while we had long respected German cars for their high quality, we assumed they'd always remain too expensive and too high end to see substantial importation. But cheap and reliable Asian cars found a massive market among the poorer sections of society. And expensive German cars kept their high quality but became much less expensive and more competitively priced over time. And all the while, American cars remained uninspired and of mediocre quality.

The same thing happened with appliances. And with machine tools. And ships. And all the rest. We fell behind in all these areas because we developed a culture of mediocrity and complacency. We assumed that people would just keep buying American goods almost purely because they were American, even when foreign goods were cheaper, or higher quality, or both.

And the problem is, this is the natural and predictable result of tax cuts and deregulation. When companies are held to high standards, they are forced to compete and innovate to succeed. But when you slacken those standards, suddenly they can make the same amount of profits without actually doing any hard work.

That's the insidious part. When companies are making massive profits, we assume they must be successful and doing well. But profits from deregulation aren't sustainable. While you sit back and rake in easy money, the rest of the world is busy competing and innovating, and you're getting left in the dust. Soon your products become inferior and overpriced, and not long after people start buying from your competitors.

And then these companies panic, because they're behind and struggling and don't know what to do to keep up. And so they start pushing for even more tax cuts and even more deregulation, arguing that it's the only thing that will allow them remain competive. Except, in the long run, it won't.