The Sword of Tiberius 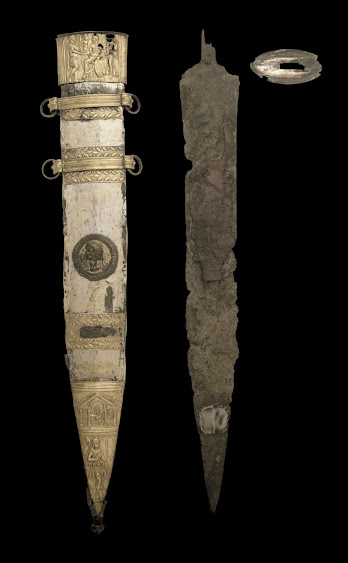 The sword of Tiberius is a fine Roman sword found in 1848 near the city of Mainz in Germany, once the command center for Rome's Rhine frontier. It now resides in the British Museum. The wonderfully preserved scabbard is brass, ornamented with tin and gold. It is a good weapon, but not truly an elite one such as a member of the imperial family would have worn; it might have belonged to a junior officer 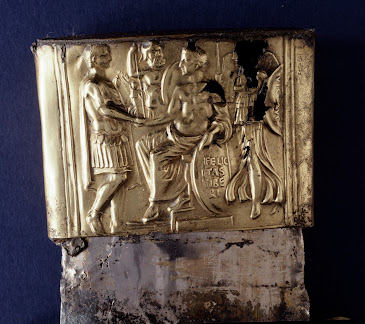 People have been arguing about what the main image represents since it was found. The old interpretation was that the seated man is Emperor Tiberius (r. AD 14-37), receiving his adopted son Germanicus. That appears to be Victory behind Germanicus, and maybe Mars behind the emperor.

Then the modern skeptics went to work, arguing that this might be just about any two noble Romans from any period, etc., etc. When I was in the museum in the 1990s the signs said that this used to be known as the Sword of Tiberius but that attribution was now discredited.

But now, in the post-modern era of the Higher Naiveté, the notion that this might actually be two known figures, commemorating a particular event, has come back into favor. British Museum curator Thorsten Opper lays out the case in this blog post. The images on the scabbard seem individualized, so they are meant to be somebody in particular, and given the scale they resemble Tiberius and Germanicus well enough. And it certainly looks like a great victory is being celebrated.

The historian Tacitus tells us that after a series of increasingly costly, indecisive victories beyond the Rhine, Tiberius simply declared victory over the Germans and recalled the aggressive Germanicus to Rome, where he received a Triumph. While one never knows, I think the claim that this scabbard represents that event is a strong one, and I for one will go on believing it until new evidence is discovered. So I imagine it belonged to some ambitious man of a second-rate family, gone off to Germany to rise through the ranks, carrying at his side a bit of propaganda that demonstrated his fidelity to the imperial family.

Given that Roman portraiture at that period still tended toward being representational rather than idealistic, if those two figures are indeed individualized then yup-- good bet they represent *some* significant pair of figures, and if the dating pins it to Tiberius' reign, then it's likely to be him and Germanicus.