The Woman in White and Victorian Loneliness 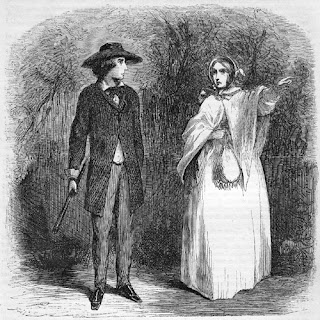 I knew I would be doing a lot of driving this month, back and forth to Manassas twice a week and up to Syracuse to bring my elder daughter home for Christmas. So I checked a long audiobook to out of the library: The Woman in White, an 1860 classic by Wilkie Collins. This is often said to be a pioneering mystery story, and the suspense was novel enough that people following the story as it was serialized in a magazine started a betting pool as to what the Sir Percival's secret was.

I found it quite entertaining. I had listened to about 2/3 but it was coming due at the library, so last night I found the text online and read the rest. (A great advantage to reading old books.) 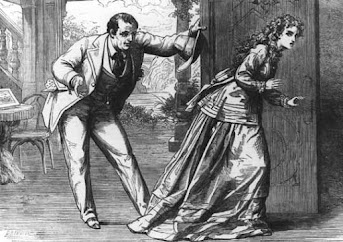 Two things struck me about it. The first is about the sort of woman who was deemed suitable to be a romantic heroine in the nineteenth century. The plot concerns a drawing master (Mr. Hartwright) who is summoned to a remote country house in Cumbria to instruct two young women, the heiress to the estate and her poor-relation companion. When Mr. Hartwright arrives, the heiress (Miss Fairley) is not at dinner because she has one of her headaches, and he is welcomed by the poor relation, Miss Halcombe. The poor relation is tall and ugly, but she is smart, witty, brave, resourceful, an adept manager of every social situation, the only one able to handle the crotchety old owner of the estate, and essentially the caretaker of the weak heiress. The heiress is beautiful, sweet, and tender-hearted, overflowing with gentle emotion, kind to everyone and everything, but she never says a single interesting thing and is as useless as a child in most of the intrigue that makes up the plot. So of course Hartwright falls madly in love with her, ignoring the competent, witty, brave, resourceful, etc. Miss Halcombe. It is so extreme that it has to be at least a bit of a joke: the readers are assumed to know that these are stereotypes, but such essential stereotypes that every romantic story must use them. (Reminded me of Kung Fu Panda, an endless string of jokes about how silly are the heroic conventions on which the story is nonetheless based.)

In fact there is one character in the story who recognizes Miss Halcombe's superiority: the sinister Count Fosco, who assists the heiress' evil husband in getting rid of her and stealing her money. The Count so much admires Miss Halcombe's intelligence and courage that he falls in love with her despite his black heart and alters the sinister plot to insure she will not be harmed, which may have been the conspirators' undoing. I kept thinking that if Hartwright was too foolish to recognize her virtues Miss Halcombe should have run off with the Count to pursue sinister adventures across the globe. 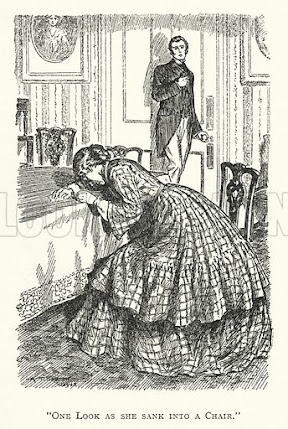 Serious question: how much does this matter? Did it have any real world effects that readers were fed a steady diet of beautiful, rich, tender-hearted, weak-willed heroines? Or did everyone recognize that this was an absurd convention? I am thinking about the feminist crusade against Disney princesses, and other such movements. I tend to think that it mattered, but only so far, and I waffle over how far that was.

The other thing that struck me was that rich Victorians were very worried about loneliness. There is a constant effort to provide people with "companions," so pervasive that people with class and education but no money can survive their whole lives as companions to various rich people. Miss Fairley is provided with a whole series. Her husband brings Count Fosco into their house partly to assist with sinister plotting but also to have someone to talk to. It seems assumed that poor people, who must live in crowded tenements or villages, have plenty of companionship, but even respectable middle-class families often seem isolated and desperate for company.

So it is perhaps the spread of wealth and respectability that contributes to our problems with loneliness? And should be bring back the professional companion?