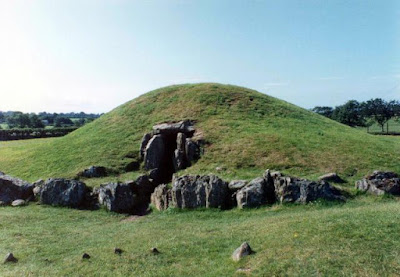 You probably know that the Neolithic people of far western Europe buried their dead in large group tombs. After all some of them are very famous, like Maeshowe and Newgrange. However, all of those huge mounds were looted long ago and the bones scattered, so we actually don't know very much about the burials they once held. We usually can't tell how the skeletons were deposited, what sort of grave goods accompanied them, over what period of time each chamber was used, how the people were sorted into different groups, all the things we would like to know about Neolithic burial practice. After all those tombs were the greatest monuments of the age and took immense labor to build, so knowing how they were used would tell us much about what those people most valued.

This explains the excitement that has greeted the excavation of a Neolithic chamber tomb in Brittany. (French  report from INRAP here, English from The History Blog here.) This picture shows the overall layout of the tomb, which was excavated into soft chalk rock. 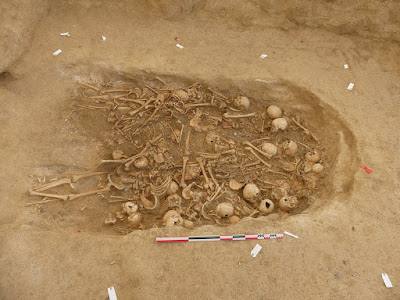 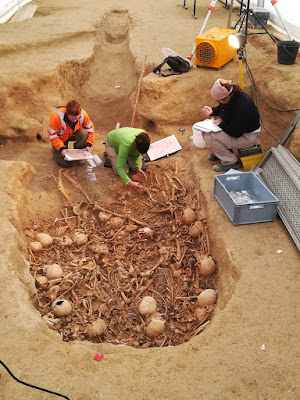 At least 50 people (based on the number of skulls) were buried in this underground chamber, in two layers; bottom layer is directly above, top layer above that. 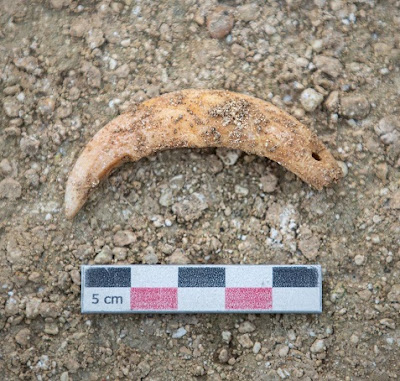 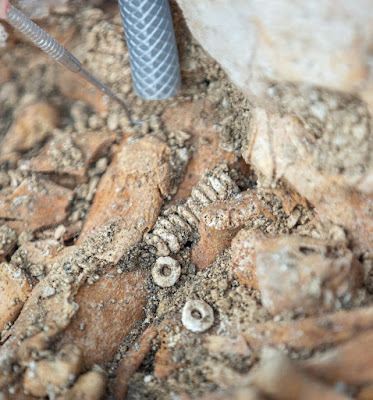 The really interesting results will come with DNA and other scientific analysis of the bones. We may learn how closely these people were related, how many were foreigners, how healthy they were, what they ate, how many died by violence. But meanwhile we have this pictures of grave goods, some predator's canine tooth  pierced for stringing, and a necklace of limestone beads.

If the burials are a good indication, this society ought to have been much different from later European civilizations. These were communal tombs, apparently used by whole communities, with little evidence of a noble class. So far it seems that this really was a much less unequal society than what came later, and scientific study of enough burials might help prove that was the case.
Posted by John at 6:20 PM