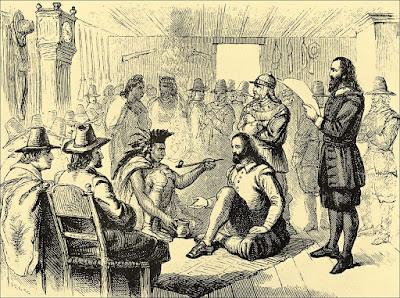 Charles Blow has a column today trashing Thanksgiving, which I will let stand in for all the others I have read over the years. Surely you have all seen this sort of thing before. The basic argument is that rather than being a feast of friendship, the original Thanksgiving meal was at best a pause in the ongoing conflict between English and Native Americans and at worst a ruse to lull the Indians into trusting their perfidious enemies, and that furthermore the Natives provided most of the food, which is just one example of how they foolishly helped the people who ended up destroying them.

It is certainly true that over the long term relations between Indians and New Englanders went from difficult to terrible, leading eventually to the cataclysm of King Philip's War (1675-1678), when the New England tribes were effectively destroyed.

Is that any reason to shun what was, so far as we can tell, a genuine attempt to improve relations? The actual story of Thanksgiving, at least as our English sources tell us, is that after two years of starvation the Pilgrims finally managed a decent harvest. Their first impulse was to offer thanks to God in a ritual of Thanksgiving, and their second was to invite their sometimes friends, the Wampanoags, to take part with them. No doubt it was a fraught occasion, since everybody on both sides knew that they had come close to war before and might end up killing each other in the future.

But while that seems shocking to us, it was the norm for most humans across most of history. People lived in small communities surrounded by other small communities with whom they might well fall into conflict. This is precisely why they developed this repertoire of strategies for furthering peace, like inviting a neighboring group to a Thanksgiving feast. There was a term in English for such an occasion, "loveday." The Wampanoags surely understood what was going on, because Native Americans had their own very similar set of rituals for making or reinforcing peace. In fact they had feasted with the leaders of Massachusetts in March of that same year to seal a treaty of mutual defense between the two groups. (See the picture above.)

The political background to that first Thanksgiving is this: after his tribe had been devastated by smallpox. the Wampanoag leader Massasoit feared that he might be attacked by his long-term rivals, the Narragansetts. So he pursued friendship with the Pilgrims, among other things supplying them with large amounts of food during their first winter. He was not acting from kindness, but from strategic calculation. It worked, too, leading as I said to a formal treaty that endured for 40 years.

Here's a good example of how Charles Blow and all those of similar mind insist on misreading the events of 1621:


After the visits to the New World by Samuel de Champlain and Capt. John Smith in the early 1600s, “a terrible illness spread through the region” among the Native Americans. . . . King James’s patent called this spread of disease “a wonderfull Plague” that might help to devastate and depopulate the region. Some friends.

"Wonderful," though, did not mean then what it means now. Like "awesome," it had no positive connotations, but referred to events that manifested the will of God in a vast and mysterious way. The Europeans had no more idea why plagues were killing the Indians than the Indians did. As they did with all events beyond their comprehension, they chalked the great dying off to the mysterious will of the Almighty, and then asked what this awesome sign might mean. Some of them thought it meant God wanted them to settle the New World and was clearing the Natives out of the way to encourage the program, but others were less sure. King James' original charter for Massachusetts actually has more to say about the Indian dying:


Within these late Yeares there hath by God's Visitation reigned a wonderfull Plague, together with many horrible Slaugthers, and Murthers, committed amoungst the Savages and brutish People there, heertofore inhabiting, in a Manner to the utter Destruction, Devastacion, and Depopulacion of that whole Territorye.

Which is true; Native Americans had been engaged for half a century in horrific warfare against each other. This did have something to do with the arrival of Europeans, in at least two ways: first, the diseases that devastated some communities upended the political balance. Second, the Natives sought to control the very valuable fur trade with the Europeans. When the Five Nations Iroquois realized that the Mohicans were trying to cut them off from the trade with the Dutch at Albany, they waged genocidal warfare until the Mohicans had been destroyed. Which is why there was a "Last of the Mohicans," and why leaders like Massasoit sought out the friendship of Europeans.

While the overall scene in the North America of 1620 was disturbed and violent, little of that can be laid on the doorstep of the Plymouth Colony, and the original Thanksgiving was one of the more pleasant incidents of that age. If we're going to choose a particular day for offering thanks, why not a day of peace and mutual respect between Europeans and Native Americans? Seems perfectly appropriate to me.

Which gets me to my real beef with Charles Blow and that whole school of hating on the past. What's the point? The goal of woke history seems to be to get white people to feel bad and non-white people to feel angry, and I want to ask in the most serious possible way whether that is a good idea. Yes, triumphal "America is the greatest place ever and has never done any wrong" history is annoying and wrong. European Americans have done plenty of wrong. But in my experience, making people feel bad about who they are is not a good strategy for promoting kindness and cooperation. White Americans are not going to disappear, so the future of our nation requires that white and non-white Americans get along. Anger and hatred, I submit, are not the way to achieve this, whether directed at others or at ourselves.

Some people like dwelling on the worst things about our past. I, while knowing all about the bad parts, prefer to dwell on the good. Which is why I am off now to celebrate Thanksgiving with my family.
Posted by John at 1:09 PM

"Is that any reason to shun what was, so far as we can tell, a genuine attempt to improve relations?"

So would you say we ought to be applauding genuine attempts to improve relations, even if they fail or are catastrophically bungled?

Should we all be ashamed of ourselves for giving Neville Chamberlain a hard time? However stupid and futile his attempts at appeasement, they were clearly genuine attempts to improve relations, so surely that forgives them?

No, I'm sorry - celebrating the first Thanksgiving is like celebrating all the treaties the United States brokered with Native Americans and then flagrantly broke.

You don't celebrate the one time a drunkard tried to stop drinking for a week, then broke down, relapsed harder than ever, went on a bender, and died in a ditch.

You don't celebrate the one time an abusive husband felt ashamed and decided NOT to beat his wife black and blue.

And you absolutely don't celebrate a bunch of self-serving colonials conveniently trying to "improve relations" with the natives at a time when they were starving and unlikely to survive the winter without help from the people they sought to exploit.

I'm with John on this one (though as a smarmy know-it-all can't resist pointing out that the essay was by Charles Blow, not Jamelle Bouie). What I'm struck by in colonial history is that the Native Americans were players, not victims.

You can argue they were players - inasmuch as any people devastated by foreign diseases and facing an unrelenting tide of conquering invaders with military technological superiority can be called players - but please, never again say they were not victims.

Don't be absurd. Attempting to make peace with your oppressors, or attempting to fight them off, or otherwise taking an active part in trying to shape your relationship with them and the destiny that will be shared between you may indeed make you a "player" in grander affairs, but it doesn't nullify your victimhood.

I think it is utterly false to say that the colonists at Plymouth were "trying to exploit" the Wampanoags. Where is the evidence of that? I submit that there is none. They were making an alliance between two groups that was not "bungled" but lasted 40 years. You are making exactly the same mistake as the article I was attacking, of reading the history of 55 years later back to 1621.

Even if it had been bungled and failed, yes, I would still want to celebrate it. I am very fond of the Christmas soccer games reported from World War I, even though they accomplished a lot less than the first Thanksgiving. I would always, always celebrate the impulse to make peace, no matter how clumsy.

Nor did the New Englanders genocide the Indians. At least 90 percent and probably more of the Indians who disappeared from the Americas died of disease. Nobody could have done anything about that; the attacks of disease began before European settlement got under way and reached hundreds of miles beyond the frontier. Just opening trade relations started the waves of death. It was a horrible tragedy but not a crime.