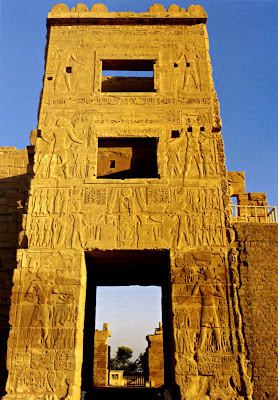 The watch tower at the Mortuary Temple of Ramesses III, 12th century BC. Medinet Habu, West Thebes. Tour guides call this the Migdal Tower, using a word from the Old Testament. 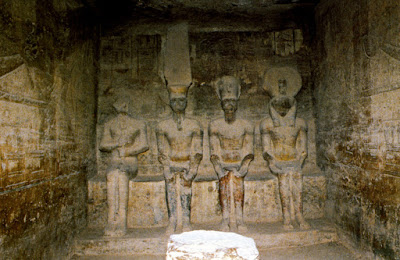 View of the Holy of Holies depicting four seated statues of: Ra, Ptah, Amun and Ramesses II. Inside the Great Temple of Ramesses II at Abu Simbel, Lower Nubia.

When the scarab rolls the sun, God Ra will deliver its first rays on the statue of the god Amun-Re the greatest of all gods and the statue of Ramesses II the god king of Egypt, and the rays leave the god Ptah in the darkness, to announce the start of the harvest season and the sitting of god king Ramesses on the throne.