Some illustrations and captions from William Marshall Craig’s 1804 Itinerant Traders of London in their Ordinary Costume with Notices of Remarkable Places given in the Background. Many more at Spitalfields Life. 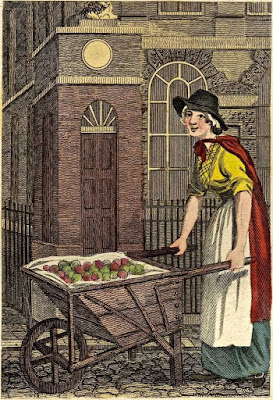 Baking and boiling apples are cried in the streets of the metropolis from their earliest appearance in sumer throughout the whole winter. Prodigious quantities of apples are brought to the London markets, where they are sold by the hundred to the criers, who retail them about the streets in pennyworths, or at so much per dozen according to their quality. In winter, the barrow woman usually stations herself at the corner of a street, and is supplied with a pan of lighted charcoal, over which, on a plate of tin, she roasts a part of her stock, and disposes of her hot apples to the labouring men and shivering boys who pass her barrow. 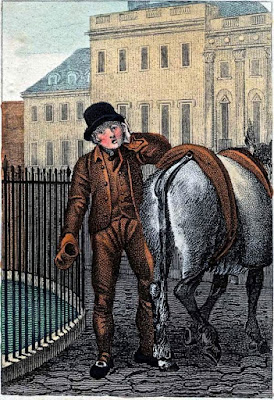 Brick Dust is carried about the metropolis in small sacks on the backs of asses, and is sold at one penny a quart. As brick dust is scarcely used in London for any other purpose than that of knife cleaning, the criers are not numerous, but they are remarkable for their fondness and their training of bull dogs. This prediliction they have in common with the lamp lighters of the metropolis. 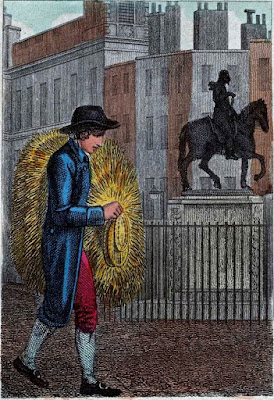 Doormats, of all kinds, rush and rope, from sixpence to four shillings each, with table mats of various sorts are daily cried through the streets of London. (The equestrian statue in brass of Charles II in Whitehall, cast in 1635 by Grinling Gibbons, was erected upon its present pedestal in 1678) 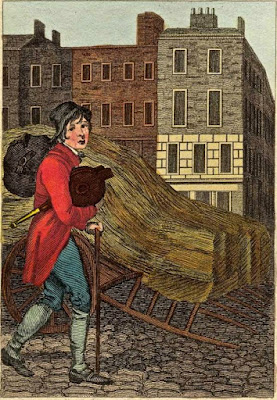 Bellows to mend. The bellows mender carries his tools and apparatus buckled in a leather bag to his back, and, like the chair mender, exercises his occupation in any convenient corner of the street. The bellows mender sometimes professes the trade of the tinker. (Smithfield where the great cattle market of London is held, on which days it is disagreeable, if not dangerous to pass in the early part of the day on account of the oxen passing from the market, on whom the drovers sometimes exercise great cruelty.) 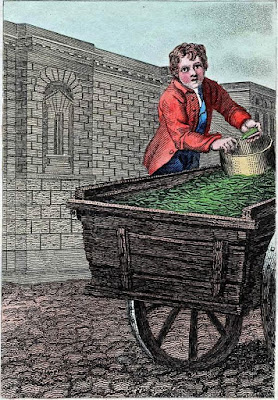 Green Hastens! The earliest pea brought to the London market is distinguished by the name of “Hastens,” it belongs to the dwarf genus and is succeeded by the Hotspur. This early pea, the real Hastens, is raised in hotbeds and sold in the markets at the high price of a guinea per quart. The name of Hastens is however indiscriminately used by all the vendors to all the peas, and the cry of “Green Hastens!” resounds through every street and alley of London to the very latest crop of the season. Peas become plentiful and cheap in June, and are retailed from carts in the streets at tenpence, eightpence, and sixpence per peck.
Posted by John at 7:25 PM