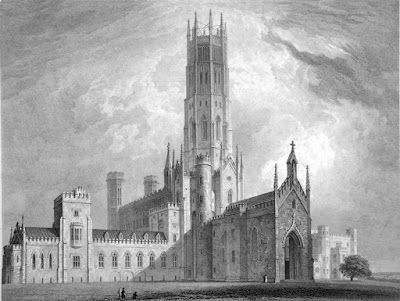 William Thomas Beckford (1760-1844) is sometimes said to have been the greatest eccentric in the whole long history of English eccentricity, which you will have to admit is quite a claim. Perhaps he was not, but on the other hand he was so rich that his eccentricity marked the world in a more dramatic way than a poorer man's. Consider as Exhibit A his house, which was called Fonthill Abbey. 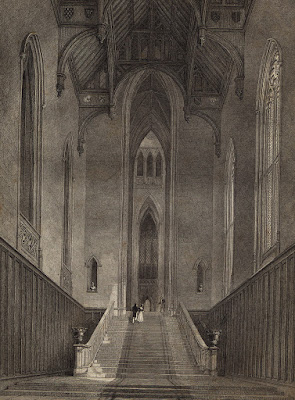 Yes, this is a private house, built for a widower who lived with no family and rarely entertained guests. Above is the great hall. 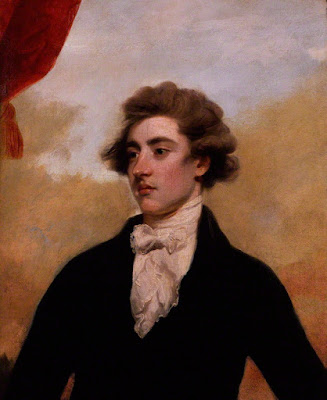 Beckford was said to be the richest commoner in England, and one modern historian has speculated that he was in fact the richest commoner in the world. He was the heir to a great Jamaican sugar fortune, although he never personally set foot in Jamaica or saw the slaves whose labor provided his income. His father, another William, had spent part of the family fortune buying political influence and was twice Lord Mayor of London, but he still had enough left to bequeath his son a million pounds in cash, besides the two great Jamaican plantations and various English properties. That happened when the younger Beckford was only 10, which may explain some of the bizarre childishness of his adult life.

One of the Beckford family properties was Fonthill near Salisbury, a place where one could take a hike of 22 miles without leaving the grounds. In the 1750s our William's father had built thereon a great house known as Fonthill Splendens. Just the thing for a political magnate of the Age of Reason. 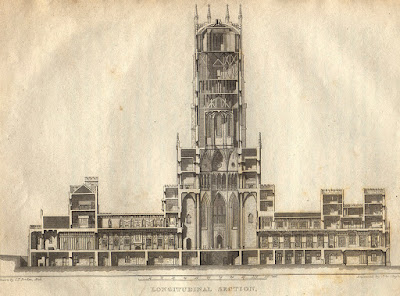 However the son was a Romantic and he hated the neoclassical pile he had inherited, so he tore it down. He brought in architect James Wyatt to help him realize his dream, and in 1796 they began constructing Fonthill Abbey. 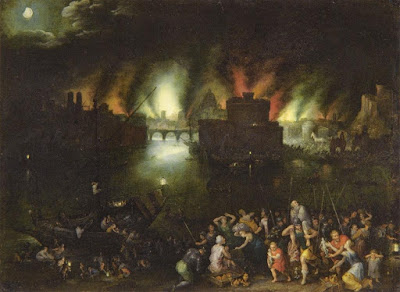 More on the house later. Meanwhile the young Beckford had created serial scandals with his bisexuality, including an affair he started at 18 with a 10-year-old boy. He was interested in music, so his tutors sent him to study with Mozart; he was interested in architecture, so he hung around for a while with architect Sir William Chambers. In 1781-82 he took a grand tour of Europe, after which he wrote a book about Italy. In 1786 he wrote a Gothick novel, Valthek, about a Caliph of Baghdad whose thirst for knowledge leads him to black magic. Some fan summarized the truly bizarre plot on wikipedia in a way that drew a reprimand from the editors: This article's plot summary may be too long or excessively detailed. I invite the curious to take a look, but meanwhile here is one paragraph:


Vathek then develops an insatiable thirst and often goes to a place near a high mountain to drink from one of four fountains there, kneeling at the edge of the fountain to drink. One day he hears a voice telling him to "not assimilate [him]self to a dog". It was the voice of the merchant who had sold him the swords, a mysterious man whom Vathek calls "Giaour", an Islamic term used for non-believers. The Giaour cures his thirst with a potion and the two men return to Samarah. Vathek returns to immersing himself in the pleasures of the flesh, and begins to fear that The Giaour, who is now popular at Court, will seduce one of his wives. Vathek makes a fool of himself trying to out-drink The Giaour, and to out-eat him; when he sits upon the throne to administer justice, he does so haphazardly. His prime vizier rescues him from disgrace by whispering that Carathis had read a message in the stars foretelling a great evil to befall Vathek and his vizir Morakanabad; the vizier informs Vathek that Carathis advises him to ask The Giaour about the drugs he used in the potion, lest that be a poison. When Vathek confronts him, The Giaour only laughs, so Vathek gets angry and kicks him. The Giaour is transformed into a ball and Vathek compels everyone in the palace to kick it, even the resistant Carathis and Morakanabad. Then Vathek has the whole town kick the ball-shaped merchant into a remote valley. Vathek stays in the area and eventually hears Giaour's voice telling him that if he will worship The Giaour and the jinns of the earth, and renounce the teachings of Islam, he will bring Vathek to "the palace of the subterrain fire" where Soliman Ben Daoud controls the talismans that rule over the world. 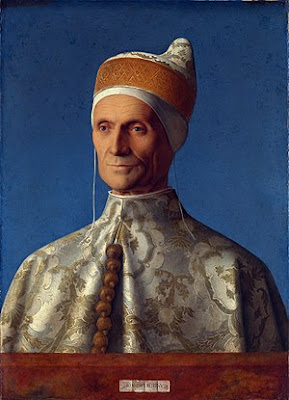 Beckford was a great collector in the way of so many rich men at the time. But, as you might imagine, he had rather distinctive taste. When he went bankrupt and had to sell off his collection – consider what a feat that was, for the richest commoner in the world to run out of money – one wag commented:


Mr. Beckford has undoubtedly shown himself an industrious bijoutier, a prodigious virtuoso, an accomplished patron of unproductive labour, an enthusiastic collector of expensive trifles – the only proof of taste (to our thinking) he has shown in this collection is his getting rid of it.

Modern opinion is more charitable, at least toward Beckford's taste in painting; that Bellini portrait of Doge Leonardo Loredan now hangs prominently in the English National Gallery, and Beckford was an early English collector of the Brueghels. 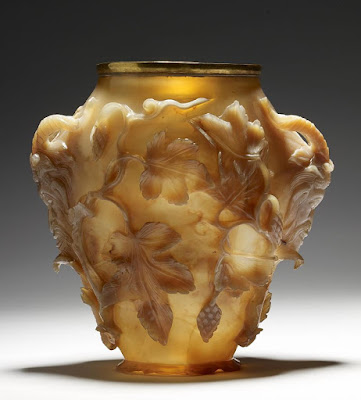 Mostly, though, Beckford liked to collect small objects, of which this vase (now in the Walters in Baltimore) is the most famous. He had hundreds of Japanese tea bowls, myriad small inlaid boxes from all over the world, coins, medals, gems, cups made from ostrich eggs, cups made from nautilus shells, figurines, and so on. 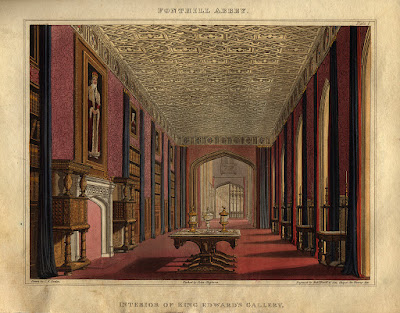 But back to the house, which was intended in part to serve as a museum for the great collection. Hence the many galleries, one of which was 330 feet (100 m) long. 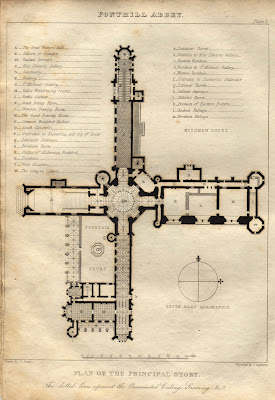 The design evolved over time, but the great tower was always part of it; in fact the first design was just the tower, perfect for the misanthrope Beckford had become to keep his distance from the world. 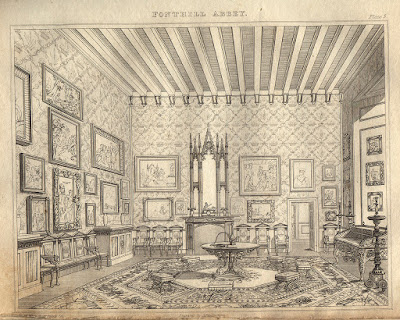 The house divided Beckford's contemporaries. The Duke of Wellington said it was the "most splendid of all structures", and one poetic admirer was moved to write,


The mighty master waved his wand, and, lo!
On the astonished eye the glorious show
Burst like a vision! Spirit of the place!
Has the Arabian wizard with his mace
Smitten the barren downs, far onward spread,
And bade the enchanted palace rise instead? 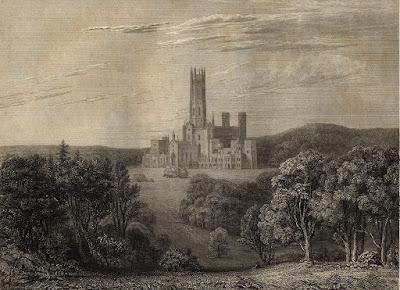 
It is, in a word, a desert of magnificence, a glittering waste of laborious idleness, a cathedral turned into a toy-shop, an immense Museum of all that is most curious and costly, and, at the same time, most worthless, in the productions of art and nature.

Beckford was not a patient man, and he was notorious for making unreasonable demands of those who worked for him. One acquaintance wrote,


The orders which he issued were as peremptory and almost as extraordinary as those given by Aladdin to the slave of the lamp.

Faced with a Beckfordian demand that the Tower be built by Christmas, the builders stopped using stone and built it with a wooden frame covered in cement. It collapsed. 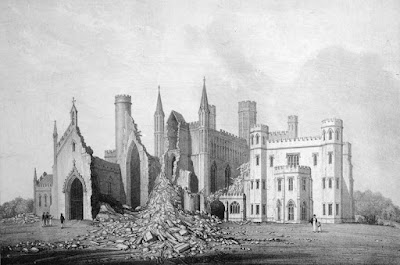 Nothing daunted, Beckford demanded that they try again. But the second tower also collapsed, taking much of the nearly completed house down with it. That was around the time that Beckford lost his Jamaican plantations in a legal action and ran out of money, so the house was never rebuilt, and it was completely demolished in 1845. 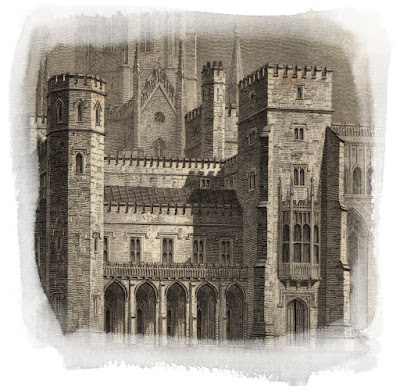 Beckford has a lot of modern admirers, besides the fellow who wrote the five-page summary of Valthek for wikipedia. The images and documents posted here all come from Beckfordiana, a web site devoted to Beckford's life and works. It strikes me that you know you have really made it when "iana" gets attached to your name; until today I had only encountered Shakesperiana and Burtoniana, so Beckford is in elite company.