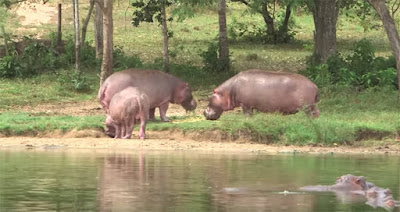 Drug Kingpin Pablo Escobar had a private zoo. After he was shot dead in 1993, some of the animals were relocated. But his four hippos were left to roam his estate; maybe the guys sent to move the zoo took one look at them and said, "not me." Since then they have multiplied to 40 to 60 animals and some have escaped from the estate and live in the Magdalena River. There they have spawned a debate over what to do about them.

Should they be treated like an invasive species, and killed or caught and taken to zoos? Colombian authorities shot one a few years ago, but the outcry was so great that they gave up on culling the herd. Now they talk about relocating them, but the one time they tried this it cost $5,000 and nobody liked that, either.

And anyway some biologists think they should be left alone:


Jens-Christian Svenning, a biologist with Aarhus University in Denmark, doesn’t think people should assume the worst. In a letter last year in the journal Perspectives in Ecology and Conservation, he and a colleague argued that Escobar’s hippos are one of several species introduced to South America that might provide “ecosystem services” provided by large herbivores that are now gone.

In the case of the hippo, these might include: funneling nutrients from land to water; altering the structure of wetlands; and keeping grassy plants in check (by eating them).

South America lost dozens of giant herbivores in the last 20,000 years or so, including the somewhat hippo-esque toxodonts, which may or may not have been semi-aquatic. “Hippos could likely contribute a partial restoration of these effects, likely benefitting native biodiversity overall,” he says. He’d let the hippos be for now, while monitoring the creatures to ensure they don’t become a problem.

As I like to remind everyone, the wild ecosystems of the Americas were drastically altered 13,000 years ago when people showed up, and it is hard to know what they were like before. (What did giant beavers do?) So maybe hippos would make the Magdalena River more "natural," like imported Asian ponies in Holland.

Or maybe not. But the harder you think about what is natural, the harder the question is to answer.
Posted by John at 1:46 PM

Interesting. Let's see what happens. Hippos and people don't get along.