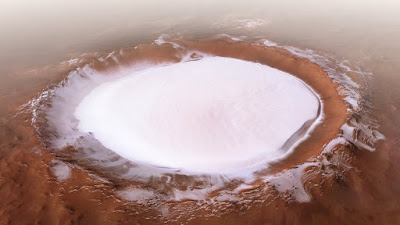 This is Korolev Crater on Mars in a recent composite image from the Mars Express spacecraft. The crater is about 51 miles (82 km) across and more than a mile deep, and it is often full of ice; here it gleams white because of a recent fall of snow.

The crater is named for Sergei Korolev, who is generally identified as "the architect of the Soviet space program," or sometimes "the Russian Werner von Braun." I realized I knew nothing more than that about the man and decided to look around.

Korolev was born in 1906 and grew up in Odessa, where he fell in love with aviation and attended a special technical high school. His teachers recognized his ability and in 1924 he moved to Moscow to study engineering. There he became a protege of Andrei Tupolev, the famous Soviet aircraft designer. After 1930 he changed directions and got interested in rockets, co-founding Russia's first rocket institute. In 1933 the institute launched the USSR's first liquid-fueled rocket, and soon after that the whole institute was drafted into the Soviet military. Then things got weird:


RNII developed a series of rocket-propelled missiles and gliders, including, in 1936, Korolev's RP-318, Russia's first rocket propelled aircraft. Before the aircraft made a rocket propelled flight, however, Korolev and other aerospace engineers were thrown into the Soviet prison system after he was falsely denounced to the NKVD, the USSR's secret police, on June 22, 1938. Korolev spent months on the Trans-Siberian railway and in a prison vessel at Magadan. This was followed by a year in the Kolyma gold mines in Siberia, probably the most dreaded part of the Gulag. Soviet leader Josef Stalin recognized the importance of aeronautical engineers in preparing for a possible war with Nazi Germany, and retrieved Korolev and other technical personnel that could help the Red Army by developing new weapons. A system of sharashkas (prison design bureaus) was set up to exploit the jailed "talent." Korolev and coworkers from the RNII thus continued their rocket design activities for several years.

Sergei Korolev was paroled by Stalin on July 27, 1944, primarily by the intervention of senior aircraft designer Andrei Tupolev, himself a prisoner, who requested Korolev's services in his own sharashka. Following the end of World War II, Korolev was released from prison and sent to Germany to study the Nazi's V-2 rocket and other technology. In August 1946, he was appointed Chief Constructor for development of a long-range ballistic missile and the next year promoted to Chief Designer. After Stalin's death in 1953, Korolev joined the Communist Party and soon won the support of communist leader and fellow Ukrainian Nikita Khrushchev, who saw the propaganda and military potential of a strong rocket program. On April 1, 1953, Korolev received approval from the Council of Ministers to develop the world's first intercontinental ballistic missile (ICBM), the R-7. The next year his proposal to launch artificial satellites into Earth orbit was also approved.

So: from 1936 until after the end of World War II, many of the USSR's top aeronautical engineers, including the famous Tupolev, were in prison. They did some of their best work under Gulag conditions, facing (like all Gulag prisoners) immediate execution if they tried to escape or even to establish contact with their families. Even after Stalin's death Korolev and other key scientists were treated as something like prisoners, their every movement and communication constantly monitored, their identities treated as state secrets.

Nor was there anything unusual about Korolev's fate in the world of Soviet science. The Soviet political elite had never trusted scientists, and they had been jailing them by the hundreds since the 1920s. You can read a fascinating short history of the sharashka phenomenon at the Russian History blog. A snippet:


For the most part, the wartime NKVD prison science system was successful in generating innovations to support the war effort. Extremely tight control, narrowly focused goals, and high levels of funding led engineers to achieve their targeted goals. Judging by a summary issued in 1944, the NKVD believed that the results were overwhelmingly positive. In the report, the NKVD agents listed twenty major weapons systems or processes—including bombers, engines, propellant production processes, radio systems, and a host of artillery guns and cannons—developed by prisoners. Of these, at least twelve were introduced into mass production, a relatively high percentage in comparison to the prewar record of military R&D. Nearly all the projects reached the certification-testing stage. Some of the successes of the sharashka system were noteworthy. Designer Vladimir Petliakov’s group, for example, developed the Pe-2 bomber, one of the most successful Soviet weapons of the war, of which eleven thousand were produced during the war. Similarly, Tupolev’s team produced the Tu-2 bomber, which was an important asset to the Red Air Force and remained in service until the 1950s.

It is part of my own worldview that if you want people to do good work for you, you should treat them with respect. But the success of the USSR during World War II shows that this is not necessarily so, and that the threat of being sent back to Kolyma can work just as well.
Posted by John at 1:20 PM

Excellent post, thank you. I've recently learned a lot about Kolyma region - gulags, Road of Bones, mines, abandoned settlements, but also the magnificent Nature Park around the Kolyma and the divine Jack London lake. Horror and sublime beauty. Siberia is a world in itself, and its History should be better known.

I had this published: