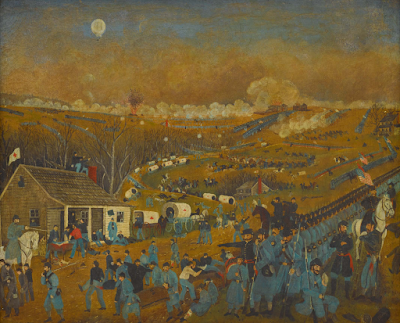 John Richards was a private in the Union Army and one of the very few ordinary soldiers from the Civil War to memorialize his experiences in paint. This remarkable painting was part of the collection of Nelson and Happy Rockefeller, and it is scheduled to be sold at Sotheby's on January 18. 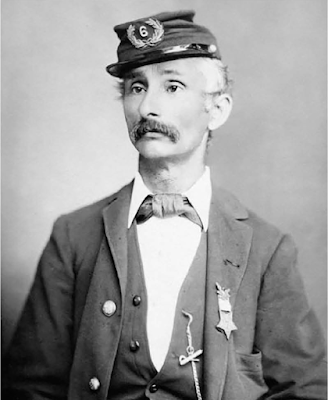 Here is Richards, done up in his veteran's regalia, I imagine for some reunion event. Richards was born in 1833 in Switzerland and emigrated to the US in 1854. He became a citizen and when war broke out in 1861 he enlisted in the 59th New York Volunteer Infantry. The 59th fought at Antietam, where Richards was wounded. It was while recuperating from that wound at a hospital in Philadelphia that Richards began to draw. The 59th next came under heavy fire at Gettysburg, where they had a part in stopping Confederate attacks on both the second and third days. After the war Richards settled in Germantown, and his only publication was a book of etchings of Germantown's older buildings. So far as we know Richards did only sketches during the War, so this oil painting must have been made afterward. 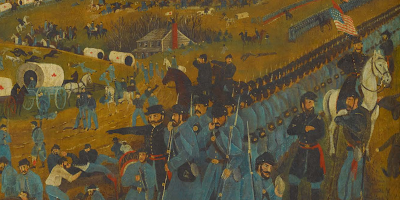 The Battle of Fredericksburg was a dismal affair, showing how incompetence of a hundred kinds stymied the Union war effort in the east. General Burnside, then in command, had the clever idea to slip away from Lee's army, which was guarding the Rappahannock River upstream where it was fordable, march rapidly to Fredericksburg and cross the deep river on Pontoon bridges, seizing the high ground on the south bank before Lee's army could react. But due to some military snafu the pontoons did not arrive until a week later than scheduled, so the army could not cross until the Confederates had all made the trip themselves and taken positions on those formidable heights. 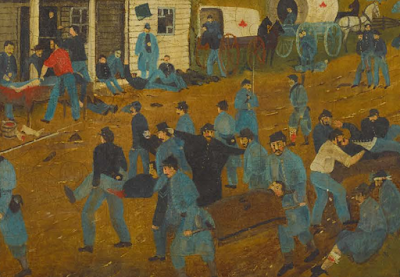 Burnside then compounded the error by attacking anyway, despite the awful terrain, which led to the deaths of more than a thousand of his men. But it might have gone differently if not for yet another twist of fate. Burnside assigned the attack to two subordinates. One of them drew the assignment to assault a massive bluff known as Marye's heights, and he threw charge after charge at its unshakable defenders until the fields were covered with corpses. The other, facing less formidable terrain, made a very tentative advance that blundered into a gap in the Confederate line that might have been blown wide open by a vigorous attack, but this leader chose to quickly cut his losses and pull back. Switch the commanders and things might have gone very differently. But of course they did not, and Lee famously exulted, "It is well that war is so terrible or we should become too fond of it." 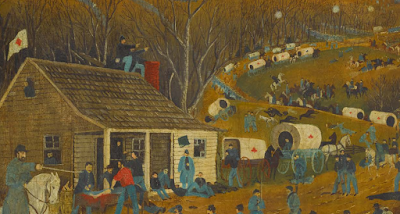 Richards and the 59th New York avoided the carnage this time; they were positioned "in support," as you can probably tell from the distant view in this painting. It is certainly not a great painting, and there was a real artist (Alfred Waud) as close to the fighting as Richards ever got, and he left some fine sketches. But Richards was a private who had been shot at Antietam and would take his stand on Cemetery Ridge at Gettysburg. He was a real soldier, and this is a soldier's view of war. The Rockefellers were big collectors of American folk art, so it is easy to see why they bought and loved this painting.
Posted by John at 3:07 PM