The mysterious Ballachulish figure is a roughly life-sized figure of a girl or goddess, carved from a single piece of alder, with pebbles for eyes. It was found during building work in November 1880, under deep peat. It was lying face down on the gravel of an old raised beach, around 120 metres from the shore of Loch Leven. It might originally have stood beside a pool. The figure has been radiocarbon-dated to around 600 BC, making it over 2,500 years old, and belonging to a period when iron was beginning to be used in Scotland.

When she first came out of the peat, she looked like this. 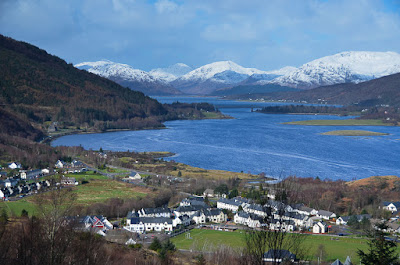 One suggestion is that she represents the goddess who protected travelers passing through the narrow strait between Loch Leven and the sea.
Posted by John at 7:41 PM

I still find it strange that the default assumption in archeology seems to be "It must have been religious!".

What about depictions of legendary figures, or revered ancestors, or people other than deities? What about grave markers depicting the deceased? What about simple decorations of the sort of a modern day crafter might make purely as practice, depicting whatever random figures come to mind with no real meaning?

But no, every small animal figure HAS to be a child's toy instead of someone having whittled a duck for the fun of it, and every humanoid figure HAS to be a god or goddess, when it could just as easily be the ancient equivalent of chainsaw carving.